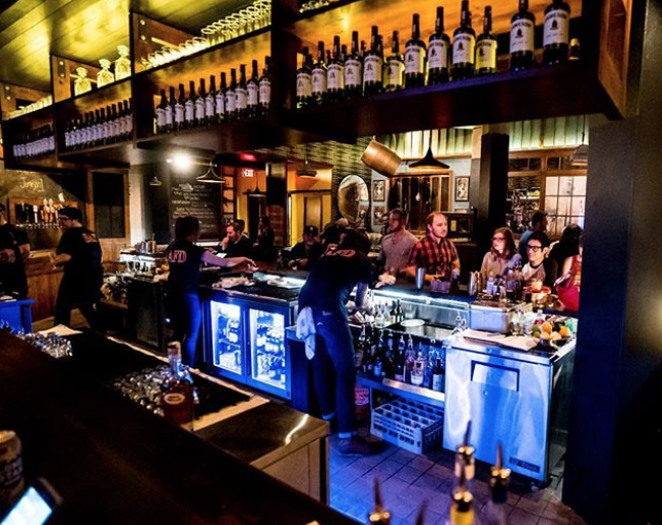 Francis Bogside reopened on Halloween with a bang — a year to the day from the fire that put it out of business for way too long. In commemoration, the staff was outfitted in SAFD T-shirts. With the wall formerly dividing Francis and Brigid blown out, allowing for double the bar, the space is now large, loud and, at least on this costumed and festive night, a place you wanted to be.

Little of the old Irish emphasis remains on either the food or drink menu. Among Old Familiar Friends on the bar side, there’s still an Irish Old Fashioned with Jameson and a house Guinness syrup, and the Desmond with Paddy’s Irish Whiskey. Dark Soul with both mezcal and gin I don’t recall from before, and there’s a new Kinsman Rakia drink with vodka, pear, blackberry lemon and allspice — though this sounds like way too much in one glass, it all works. There are several bottled Texas beers including the revived Celis Pale Bock. And a couple of HighWheel brews from just down the street on south Flores are available on tap.

The Francis kitchen is now under the direction of Chris Cook. I was reluctant to order food on the first night, but the troops were hungry. Massive adrenaline (or Fernet or other stimulants) must have been fueling the staff, as the food appeared in commendably short time. And it seemed spot-on. You may not have to order beef cheek mac and cheese too many times in your life, but know that if you’re ready for a caloric bomb, accented with crispy fried onion, this is your poison. The contents in the Bogside burger, bracketed by a shiny, brioche bun, seemed a little slippery, but the taste was as good as remembered, and the house chips with spicy ketchup seduced as before. One taste of the yardbird curry with coconut masala made me want to come back.