Visit any artist’s studio and you’ll likely be privy to an unfinished project or two, some of which may never be fully resolved. An artful exploration of that limbo-like state of affairs, French writer/director Jean-François Laguionie’s animated film The Painting (Le Tableau) brings to life a colorful crew of characters in varying stages of completion. Distinguished by a vintage sensibility and an orchestral score by Pascal Le Pennec, the film follows an unlikely trio of friends as they leap from the canvas into a series of other paintings in search of the artist who’s mysteriously abandoned them. On the surface, a simple story surrounding star-crossed lovers Clare and Ramo, The Painting slyly addresses tolerance and classism through the dynamics between the self-righteous Alldunns, uncolored Halfies and roughly rendered Sketchies — a scorned breed some would prefer to erase. SAMA screens the English-language version of the 2011 film as part of its outdoor Family Flicks series. Blankets, lawn chairs and picnics welcome. Free, 8:20pm Fri, San Antonio Museum of Art, 200 W. Jones Ave., (210) 978- 8100, samuseum.org.

To augment the experience of her multimedia exhibition "Christina Is a Coward" (curated by Alana Coates), artist Megan Solis planned an accompanying trio of in-gallery performances, the last of which you can still catch. Solis told the Current that this last performance (titled Disappointments are Revealed at Samantha and Rebecca’s Slumber Party) will “finalize the failure and disconnection of romantic relationships by creating a ritual of them.” If you didn’t catch the first performances, no need to fret. Solis explained that the pieces are only loosely linked and that the sense of “confusion and even revulsion to the performances” is as welcome as empathy for the characters therein. If this all sounds new, but totally badass to you, plan to attend a closing reception/viewing for the show on Thursday and the final performance on Friday night. Free, 6-9pm Thu-Fri (performance at 8:30pm Fri), Hello Studio, 1420 S. Alamo St., (210) 291-8640, hellostudiosa.com. 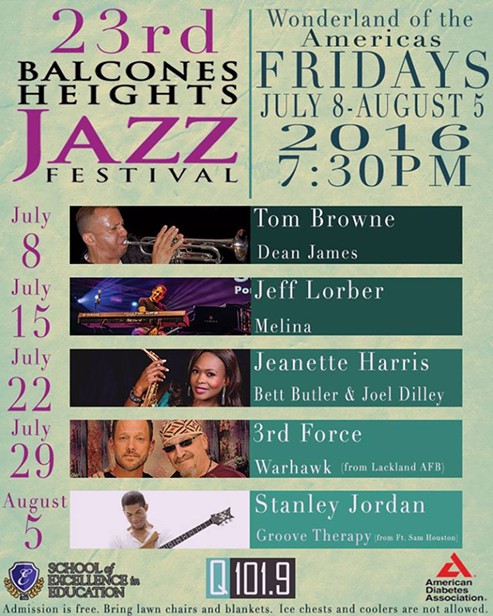 Jazz up your Friday night with chameleonic guitar virtuoso Stanley Jordan and Ft. Sam Houston's own soulful ensemble Groove Therapy as they wrap up the 23rd edition of the Balcones Heights Jazz Festival. The kid-friendly evening of music under the stars also includes food and beverages available for purchase from a variety of vendors. Seating is limited, lawn chairs and blankets welcome. Free, Groove Therapy at 7:30pm, Stanley Jordan at 9pm Fri, Wonderland of the Americas Amphitheater, 4522 Fredericksburg Road, (210) 732- 0055, reachfortheheights.org/jazz-festival.

Created by school counselor and a mindfulness instructor Carrie Edmond as a means to expand her network of educators, students and families, the local organization ONE Mindful Maven champions the benefits of mindfulness through coaching, workshops and retreats. Organized in an effort to “offset the excessive negativity and suffering currently being seen and experienced in the media, the U.S., and the world,” the group’s Mass Meditation for Peace is set to bring together light and energy workers, shamans, healers and peace-lovers for an hour of unified silence in the serene setting of the Jingu House at the Japanese Tea Garden. Led by local artist and graphic designer Danielle Cunningham, the free morning of positive energy and stress relief invites like-minded community members to “be the change you wish to see in the world.” Those unable to attend are encouraged to join the livestream via the Facebook event page. Free, 8-9am Sat, Japanese Tea Garden, Jingu House, 3853 N. St. Mary’s St., (210) 735-4648, onemindfulmaven.com.

Award-winning Houston-based educator, essayist and editor Leslie Contreras Schwartz visits The Twig to read from Fuego, her first collection of poems. Combining the extraordinary with the ordinary, Fuego contains a multitude of poetic tales exploring the struggles of everyday life — from birth to motherhood and everything in between. Free, 2-4pm Sat, The Twig Book Shop, 306 Pearl Pkwy., Suite 106, (210) 824-2611, thetwig.com.

After earning Oscar nods with his 1981 war epic Das Boot, German director Wolfgang Peterson made a surprising departure with 1984’s The NeverEnding Story — a special-effects-fueled adaptation of a fantasy novel by Michael Ende. Borrowing bits and pieces from Alice in Wonderland and The Dark Crystal, the film employs a story-within-a-story framework to immerse a young boy in a magical kingdom threatened by a menacing wave of “Nothingness.” While The New York Times likened it to The Pre-Teen-Ager's Guide to Existentialism, Roger Ebert asked, “Were children's movies this nihilistic in the old days?” Slab Cinema and Hemisfair team up for an outdoor screening of the cult classic in conjunction with the Southtown Cinema series. Free, 8:30pm Sat, Hemisfair Park, Yanaguana Garden, 434 S. Alamo St., (210) 709- 4750, slabcinema.com.

Mission Library inaugurates its new family-friendly Story Walk: All Around Us series with a program created by writer Xelena González and illustrator Adriana M. Garcia. In addition to a reading and 16 weatherproofed illustrations presented in an outdoor setting, the public art and family literacy project features performances by Anthony The Poet, Maya Guirao and Andrea Vocab Sanderson, plus snacks provided by Healthy Neighborhoods. Free, 10am Sat, Mission Library, 3134 Roosevelt Ave., (210) 207- 2704, mysapl.org.