It’s been a rough year in news. Okay, so that’s an understatement. Even if you try to avoid staying on top of the news, it’s be damn near impossible to dodge the constant shitstorm of breaking news coming from the new administration. If anything, this year has taught us the importance of understanding local politics and community — and the history that it’s built on. We’ve built a list of San Antonio and South Texas-centric gifts that’ll help anyone stay on top of local news that matters and understands why it matters. No alternative facts, we promise.

Bloodlines by Melissa del Bosque
Bloodlines is the first book by Emmy-award-winning Melissa del Bosque, an investigative journalist who specializes in immigration and border reporting at the Texas Observer. In Bloodlines, del Bosque tells the true story of FBI rookie Scott Lawson, who sets out to take down a Mexican drug lord by dismantling his American horse racing dynasty built on extortion and blood money. Bloodlines provides an up-close look into a life of drugs, money and cartels, only a couple of hundred miles south in Laredo. Order as an E-book ($14.99) or hardcover ($27.99).

The Color of Law by Richard Rothstein
It’s no secret: San Antonio is one of the most economically segregated cities. Grow up in a certain neighborhood, and your future will nearly be set in stone. But how did we get that way? How did any city become so economically and racially divided? The Color of Law explains the fascinating/terrifying history of redlining — when the feds drew actual lines to limit where certain minorities couldn’t rent houses. It’s the building block of all modern U.S. city. With our new mayor’s new focus on bringing equity back into the city, this book couldn’t be a timelier read ($27.95).

Zines from Cattywampus Press and St. Sucia
These two zines tackle the complicated cultural tangle of the South. Cattywampus’ publications touch on old southern stereotypes seeped in misogyny and racism (through a modern lens). St. Sucia, created by a badass San Antonio lady team, elevates Latina voices, artists, and experiences across South Texas. Small press and self-publication is the future. Get on it.
Check them out online at cattywampuspress.com & stsucia.bigcartel.com.

San Antonio Library Card
To quote Arthur, your favorite cartoon aardvark boy: “Having fun isn’t hard when you have a library card!” The same goes for San Antonio Library. Not only does it offer the obvious: free books, magazines, CDS, DVDS to rent at your heart’s content, it has brand-new Latino Collection with literature, educational texts, and even zines on contemporary Latino life in the U.S. You’ve got Texas history and genealogy resources on the top floor, the Southwest School of Art’s library on the second, and some of the best public wifi in the city throughout the enchilada-red building. 600 Soledad, mysapl.org.

Donation to ProPublica
Believe it or not, we at the Current think the best way to combat #fakenews is by supporting real news. And throwing money at ProPublica, the powerful investigative journalism nonprofit, is the best way to start. ProPublica’s serious muckracking has sparked Congressional investigations, upended corporations, and seriously shifted state and national laws. Unsurprisingly, a lot of their work comes out of Texas. donate.propublica.org

PopovichKerr2020.com
Popovich-Kerr 2020 T-Shirt
Let’s be honest: the Gregg Popovich for Prez and Steve Kerr for Veep is a dream ticket. NBA coaches Pop and Kerr have unabashedly called out our current administration for a number of injustices this year, while still leading their teams to greatness. Buy a t-shirt (or mug) in their honor — 100 percent of the proceeds go straight to civil rights groups. popovichkerr2020.com

Vote Local t-shirts
Being an active member of your community — especially when it comes to elections — is always important, and there’s no better way to rep that you’re woke, involved, and want others to be too than with a “Vote Local” t-shirt. It doesn’t hurt that the colors & graphic design are cool, too. Pick one up at cultureflock.com. 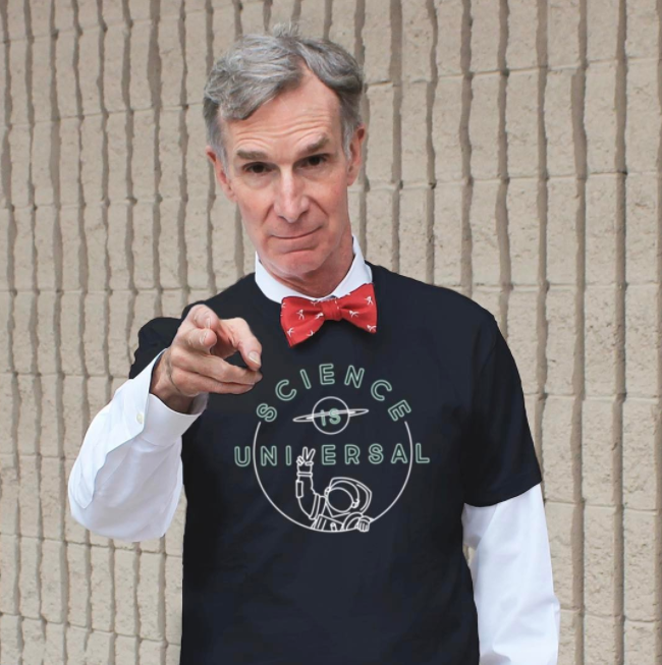 Photo via Instagram, billnye
Tickets to Bill Nye appearance at Planned Parenthood
Bill Nye the Science Guy will be in San Antonio on May 8, 2018 — and who doesn’t love Bill Nye. Plus, there’s lunch involved. Plus, the luncheon benefits Planned Parenthood South Texas. Bill! Bill! Bill! Price per table (seating 10) ranges from $2,500 - $25,000, depending on how much you’d like to donate to Planned Parenthood. To sponsor a table, reach out to Angela Koester at [email protected] or call (210) 572-5278.