Nearly every write-up of Sleepy Sun mentions that the five-piece band (Jack Allen, Bret Constantino, Matthew Holliman, Evan Reiss and Brian Tice) hails from San Francisco and has toured with the Black Angels. That’s typically critic-speak for “best enjoyed with one or more items listed under schedule one of Uncle Sam’s Good Time Cocktail Menu™.” Fortunately for the Current—which would never, ever suggest any of its readers do anything illegal (or imply that any of its writers ever have)—Sleepy Sun’s blown-out, black-lit basement trips don’t require performance enhancement. Boomers through Gen Xers can get a flashback high from the band’s sunburnt West Coast harmonies and effects-pedal necromancy. The only drug recommended for you damn kids nowadays is your ADHD medication if you can’t make it through a five-minute guitar solo without reaching for your iPhone. $13, 9pm, Limelight, 2718 N St. Mary’s, (210) 995-7229, twinproductions.frontgatetickets.com. —Jeremy Martin The initial spark for Rennie Harris’ career arrived when he saw “locking” dance pioneer Don Campbell perform on Soul Train. Throughout his teens, Harris danced with popping crews and hip-hop ensembles including the Step Masters and the Scanner Boys, and in 1992 founded Puremovement, a “dance theater company dedicated to preserving and disseminating hip-hop culture.” Often inspired by his experiences growing up in North Philadelphia, Harris’ original works have earned him numerous awards and fellowships, not to mention comparisons to Alvin Ailey and Bob Fosse. Among Harris’ most applauded works, Rome & Jewels fuses genres (from hip-hop to classical) into a movement-based piece drawing from both West Side Story and Romeo and Juliet. A youth-driven incubator for Puremovement, Rennie Harris Awe-inspiring Works (RHAW) lands at the Carver for one night only. $35, 8pm, Jo Long Theatre, Carver Community Cultural Center, 226 N Hackberry, As the story goes, singer-songwriter Gina Chavez was “raised on Lyle Lovett, Little Richard and Michael Jackson” and hijacked her dad’s guitar after a family outing to Austin’s Continental Club. After cutting her teeth in coffee shops, Chavez released the 2007 debut Hanging Spoons and has since been profiled by the Austin American-Statesman and NPR. Based on her volunteer efforts in El Salvador—where she established the Niña Arriba scholarship fund—Chavez also landed on Southern Living’s list of 11 women who’ve left “a beautiful footprint across the South.” Produced by Michael Ramos, Chavez’s new album UP.ROOTED mixes elements of cumbia, reggaeton, bossa nova and pop and features contributions from Adrian Quesada and the Grupo Fantasma horn section, the Tosca String Quartet, David Pulkingham and Glenn Fukunaga. With likeminded Latin-fusionista Patricia Vonne. $5-$10, 8pm, 502 Bar, 502 Embassy Oaks, (210) 257-8125, 502bar.com. —BR

On and Off Fredericksburg Road Studio Tour

Established in 2007 with a mission to “promote the work of diverse visual and cultural artists in the area, enhance appreciation for the arts in the community and stimulate neighborhood revitalization,” the On and Off Fredericksburg Road Studio Tour provides the public with the unique opportunity to visit home studios, cooperatives, pop-ups, backyards and businesses in and around the Deco District. Referred to simply as “Fred” by founder Kellen Kee McIntyre of Bihl Haus Arts, this year’s tour connects 52 venues, 80-plus artists (working in everything from jewelry and sculpture to painting and photography) and four theater companies (the Classic Theatre of San Antonio, the Woodlawn, Jump-Start Performance Co. and the Playhouse), each of which will be presenting “flash performances” to be announced via Twitter (twitter.com/onandofffred). The official catalog ($10-$15 for a printed copy or $5 for an online version) admits two to Friday night’s Autograph Party (an opening reception with hors d’oeuvres, wine, live music and works by every participating artist) and also functions as an invitation into the workspaces of Rolando Briseño, Laurel Gibson, Danville Chadbourne, Russell Stephenson, David Zamora Casas and many more. $5-$15; Autograph Party: 6-9pm Fri, Bihl Haus Arts, 2803 Fredericksburg, (210) 383-9723; Studio Tour: 11am-6pm Sat, noon-5pm Sun, locations vary; Closing Reception: 6-8pm Sun, Woodlawn Theatre, 1920 Fredericksburg, (210) 267-8388; onandofffred.org. —BR

It’s kind of a shame “emo” became such a dirty word. Before Hot Topic, Dashboard Confessional and weird haircuts poisoned the well, there was some seriously great music to be heard in the genre. For obvious reasons, Austin’s Driver Friendly doesn’t identify in any way with emo; but how else can you categorize a band that so dutifully worships at the altar of Jimmy Eat World? The shout-along choruses, frantic tempos and pop-punk song structures of Driver Friendly’s best tracks all recall emo’s late-’90s heyday. The group’s live sets only further stress a fun-at-all-costs attitude, one that packs extra punch courtesy of a seven-piece ensemble replete with horn line and keytar player. Fresh off a tour with likeminded acts Reliant K and Motion City Soundtrack, the Driver F boys roll into Limelight with support from Junes Not Faking, Fader Friend and Stomping On Iris. $11-$13, 8pm, Limelight, 2718 N St. Mary’s, (210) 995-7229, twinproductions.frontgatetickets.com. —J.D. Swerzenski

Organized by Global Experience Specialists, “Alien Worlds and Androids” invites guests to “blast off to a world where science fiction meets science fact.” Through nine distinct areas—Robot Space Explorers, Looking for Life in Space, Alien Life on Earth, Artificial Intelligence and Robots, Explore the Solar System, The Robotization of Planet Earth, I-Cyborg, The Human Microbiome and Are We Alone?—the interactive exhibit sheds light on such topics as the difference between robots and androids and what the rover Curiosity might find while on Mars. In addition to cutting-edge technology provided NASA and its Jet Propulsion Laboratory, the touring show features more than 30 meteors and close encounters with Robby the Robot, C-3PO, Iron Man and T-800 from The Terminator. $4-$15, 10am-5pm Sat, noon-5pm Sun, Witte Museum, 3801 Broadway, (210) 357-1900, wittemuseum.org. On view through May 26. —BR 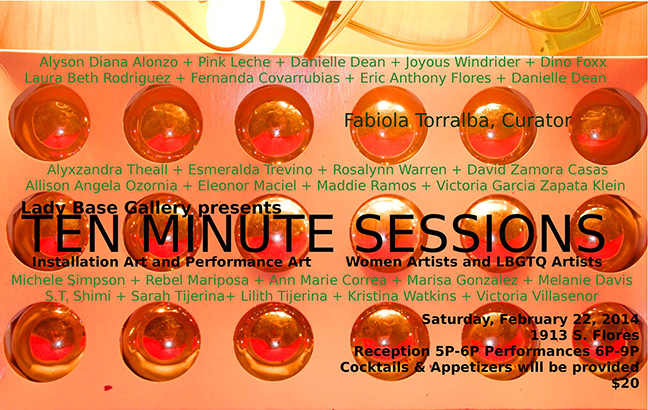 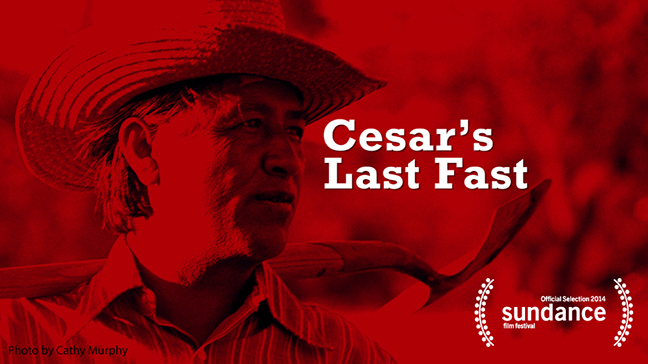 Although it has done a fair amount of globetrotting in the past, don’t assume this year’s 36th annual CineFestival will include films from Latin or South America. It’s a conscious decision curator Jim Mendiola made when he joined the team in 2010. He wanted to provide the nation’s longest-running Latino film festival with a primary function. By continuing to scale back the festival’s global reach and focus more on projects made by American-born Latinos, Mendiola envisions CineFestival becoming a bigger player in the festival circuit for films that have a “significant relevance” to the Latino experience in the U.S.

One can only hope the upcoming biopic Cesar Chavez, starring actor Michael Peña as the late civil rights activist and labor union organizer, will be as insightful and poignant as Cesar’s Last Fast, a documentary that spotlights Chavez’s 36-day hunger strike in the summer of 1988 and presents it as the heart of his lifelong effort to improve the lives of migrant farm workers. Through never-before-seen footage, moving interviews with family members and former United Farm Workers staffers and supporters, and the words of Chavez himself, Cesar’s Last Fast, which made its world premiere at the Sundance Film Festival this year, reflects Chavez’s commitment to lead an agricultural revolution in the U.S. Filmmakers Richard Ray Perez and the late Lorena Parlee have created an adoring and inspirational portrait of one man’s “expression of sacrifice in action.” A Q&A with Richard Ray Perez follows the screening. $10-$12, 7pm, Guadalupe Theater, 1301 Guadalupe, (210) 271-3151, brownpapertickets.com.

For a complete schedule of CineFestival screenings and events, visit guadalupecuturalarts.org.

The casual listener likes to say that music is good as long as it “comes from the heart.” Bullshit. Too frequently, sentimentality’s very nature causes the artist to lose focus on the art’s purpose: to communicate an idea. An outpouring of artistic emotion often indicates artistic poverty; the artist is so caught up in trying to express a certain “feeling” that he/she/it forgets that the point is not to convey emotion, but to provoke it. It’s not enough to tell your audience that you’re sad. You must make them sad. This applies to all genres (ahem, pop country, cough, cough), including that scorned cacophony we call heavy metal. The past decade and a half has seen a deluge of songwriting craftsmanship that’s pushed sonic, musical and emotional boundaries without devolving into the sentimental schlock that the mass audience thinks it desires. Skeptics are encouraged to investigate the work of Anathema, Pain of Salvation and even Killswitch Engage to hear uplifting and transcendent metal. Which brings us to Beartooth. The solo project of one Caleb Shomo, Beartooth embodies the argument that fervor, talent, authenticity and drive don’t necessarily yield earth-shattering artistic expression. There is nothing wrong with Beartooth’s debut EP, Sick. Shomo’s knack for juxtaposing ear-splitting dissonance against almost poppy hooks delivers an agonizing autobiography of the young troubadour’s personal problems, all the while raging away in a testosterone-fueled frenzy that typifies the post-New England metalcore sound. Along with The Word Alive, A Skylit Drive and Hands Like Houses, Beartooth lands at the White Rabbit in support of headliners Memphis May Fire. $17, doors at 5:30pm, The White Rabbit, 2410 N St. Mary's, (210) 737-2221, twinproductions.frontgatetickets.com.

Since it first rolled into town in 2006, nothing has pushed the bounds of artistic experimentalism, abstract exhibitionism and outright patience quite like No Idea Festival. This year’s fest hones the focus toward free improvisation, presenting an impressive cross-section of electronic, free jazz and experimental artists. Kicking things off at 4 p.m. will be Mexico City-based author Carlos Prieto, presenting an overview of his recently compiled three-volume set of Mexican electronic recordings. The official music portion gets going at 6 p.m. with performances from an electro-improv outfit featuring Bonnie Jones, followed by sets from SA’s own electronic wizard Justin Boyd (pictured) and Chicago drummer Michael Zerang. Local accordion wunderkind Juanito Castillo will play an afterparty (from 9:30 p.m. to midnight at Tortilleria La Popular, 1415 S Presa). Easy listening this is not, but for those looking to get out on the artistic edge, there’s no getting closer than this. $10, 4-9pm, Coates Chapel, Southwest School of Art, 300 Augusta, noideafestival.com. —JDS