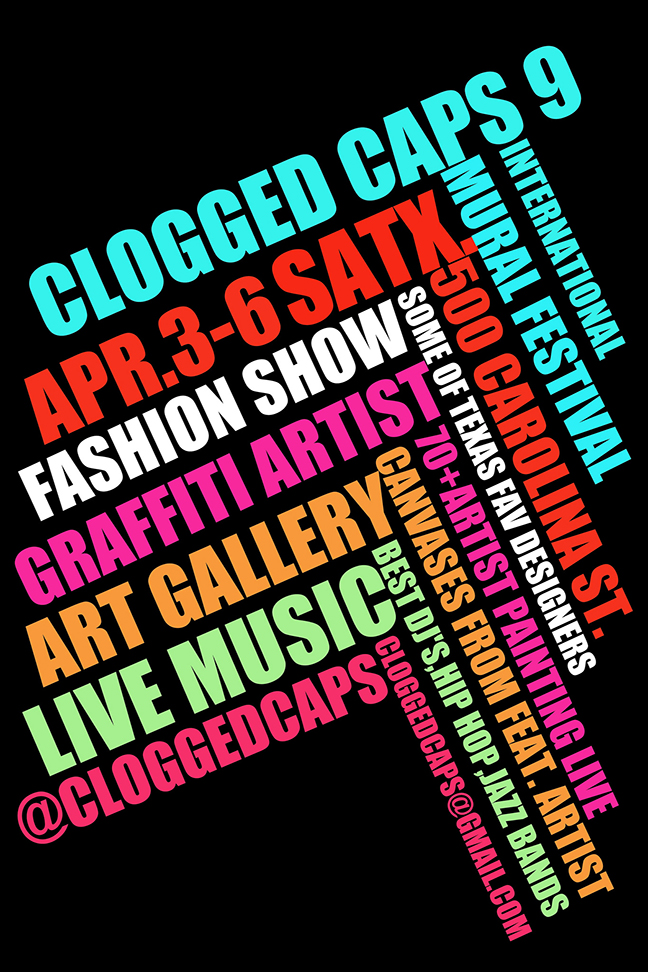 While local hip-hop entities like Power 106 and the Prhymemates have faded into distant memory, San Antonio’s original aerosol art festival, Clogged Caps, soldiers on. For its ninth edition the mural fest promises more than 70 artists (including familiar names like Supher, Duo and Soupé) covering 14,000-plus square feet of walls with fresh pieces. United under the theme “Graffiti Jazz,” the collection of artists also includes names like BEKIT, Hostel and Mez. On the music front, Mad One takes center stage on Friday night, and DJs abound throughout the weekend, with sets by San Anto stalwarts Donnie D and Tech-Neek and a slew of others. New for this year is the Art & Fashion Fête ($15, 6:30-11 p.m. Thu) that kicks off the festival and showcases young designers including Joey Ramirez, LaToya Chenelle, Christina Xu, Lauren San Miguel and Brandon Madrid. Free, 3pm-2am Friday, noon-1:30am Saturday, noon-7pm Sunday, Appliance Liquidation Outlet, 500 Carolina, twitter.com/cloggedcaps. –M. Solis 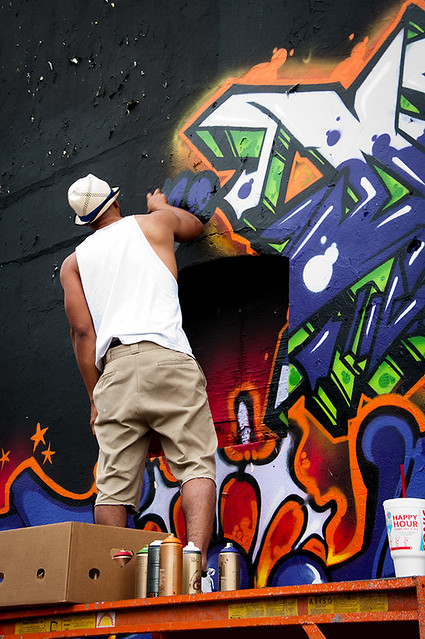 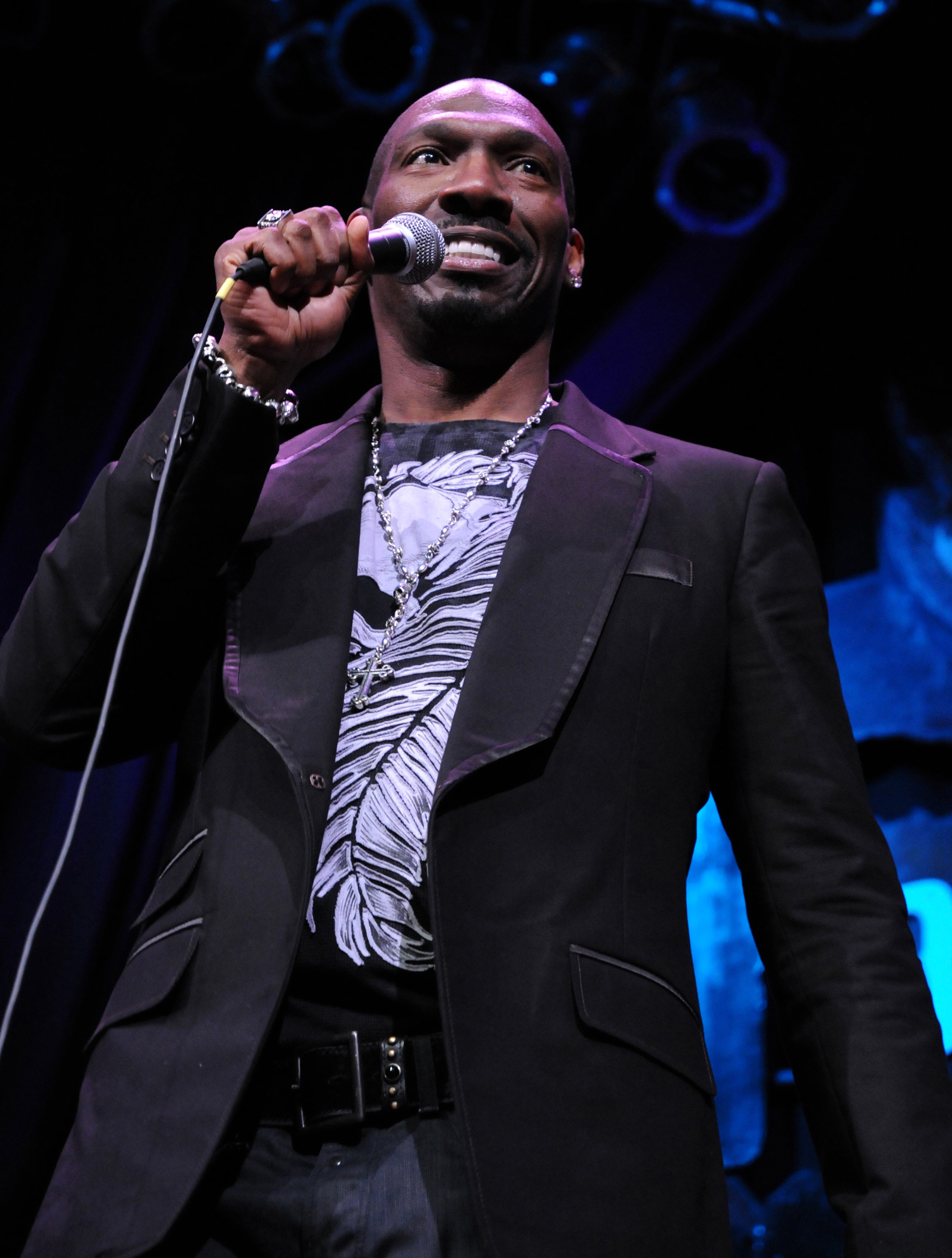 Oh god oh god oh god. Just calm down. Nobody ever died from this. Ride it out. How much longer? Shit, how does time work, again? If the little hand is on the one and the big hand

Chill out. They aren’t real hands. I am not the dog from Norbit. I mean I was, but not, like, really. Don’t think about Norbit. The guy said this would last for eight hours. Eight hours. Ate ours. Who ate ours? The dog! I am not the dog from Norbit. Don’t think about Norbit. Think about standup comedy, CB4, The Boondocks, Chappelle’s Show, anything but Eddie in that fat suit. That bikini. That was freaky. Super freaky. Oh my god. What if I am Rick James, bitch? $27.50, 8pm Thursday, 8pm & 10:15pm Friday- Saturday, 8pm Sunday, Laugh Out Loud Comedy Club, 618 NW Loop 410, 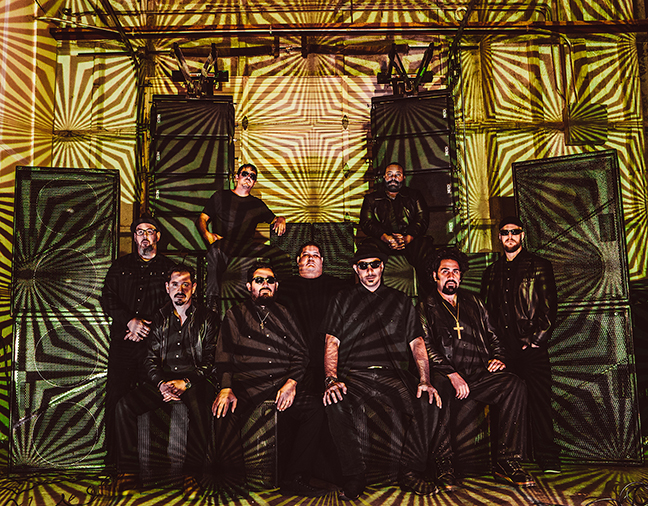 Ballet in the Park 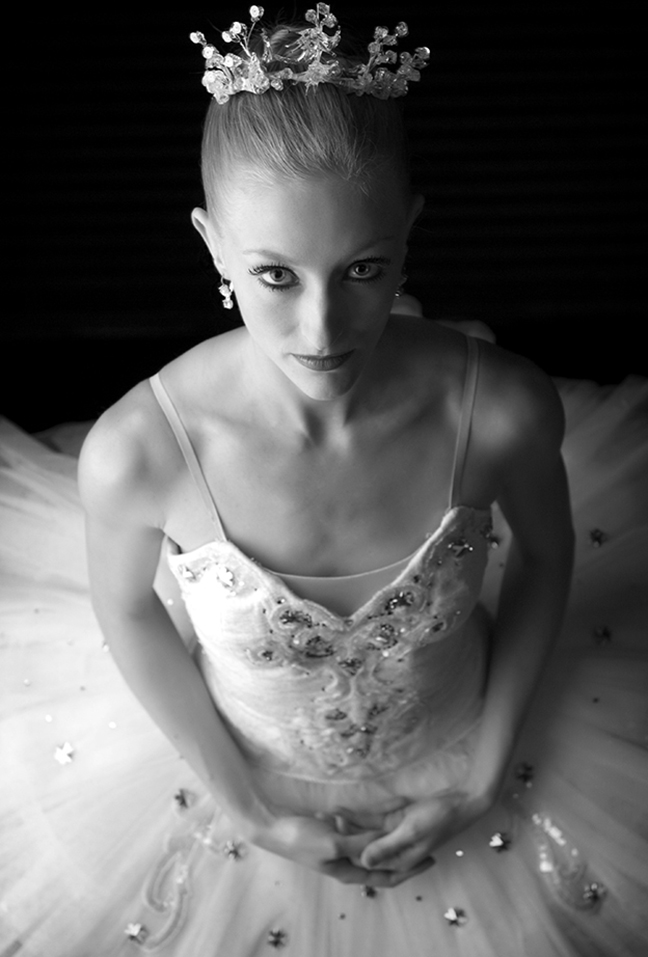 Come As You Are: A Kurt Cobain 20th Anniversary Tribute 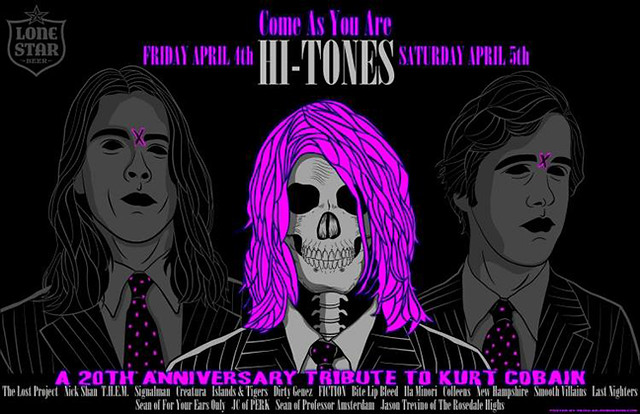 The statue of Kurt Cobain in his birthplace Aberdeen, Wash., unveiled February 20 (what would have been his 47th birthday) is a hilariously on-the-nose pseudo-religious icon complete with a single tear, the kind of rock-god idolatry Nirvana frequently mocked. But paying tasteful tribute to a beloved suicide victim/perpetrator (especially one you never personally knew) is tricky, something we’ll be painfully aware of long before they’ve run out of crap to hawk “in honor” of the 20th anniversary of Cobain’s death. Credit Hi-Tones, then for doing it right. Local acts Fiction, Egshan, Islands & Tigers, Last Nighters, Bite Lip Bleed (on Friday), Smooth Villains, Creatura, Colleens, the Lost Project (on Saturday) and many others will cover their favorite Nirvana songs and play originals inspired by the band in a two-stage, two-day celebration of Cobain’s legacy that he might’ve actually enjoyed. $5, 9pm-2am Friday-Saturday, Hi-Tones, 621 E Dewey, (210) 785-8777, facebook.com. —JM 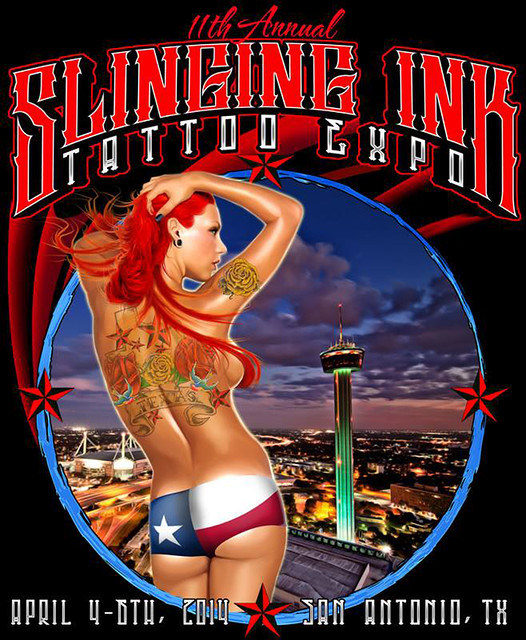 Get ready for a serious buzz! San Antonio’s favorite body art extravaganza returns for its 11th year and this time, it’s absolutely free. Bigger and bolder than ever, this year’s expo boasts over 100 exceptional artists representing 10 states—including Florida (Atomic Tattoo’s Rick Rosas), New York (award-winning “Freestyle Alex”), Nevada (Tee Celistino from Hart and Huntington) and New Mexico (Darrio Medrano from La La Bomb)—and top-shelf entertainment from female-fronted Italian metal band Lacuna Coil, their touring mates Cilver, New York rockers Eve to Adam and LA-based stoner metal outfit Kyng. Also, as a special treat this year, the eye candy from the H2Ocean calendar will be in attendance. As always, for those looking to win some scratch, there will be contests and prizes throughout the weekend, including the fan favorite “Worst Tattoo.” Free, 3-10pm Friday, noon-10pm Saturday, noon-8pm Sunday, Wonderland of the Americas, 4522 Fredericksburg, San Antonio, (210) 785-3500, slinginginktattooexpo.com. 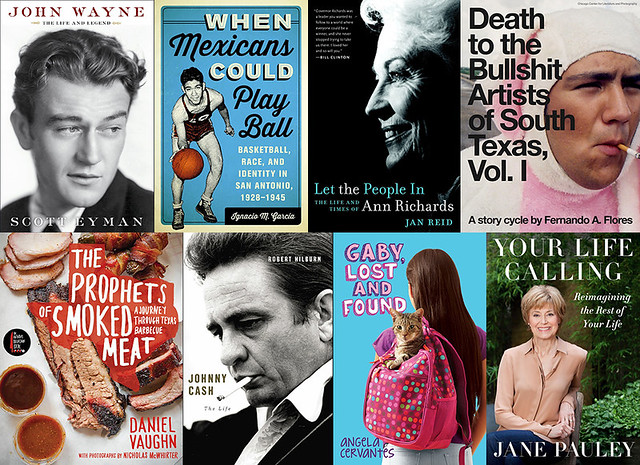 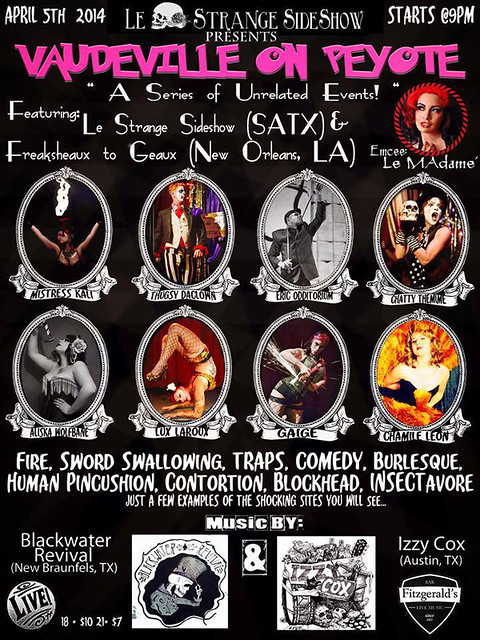 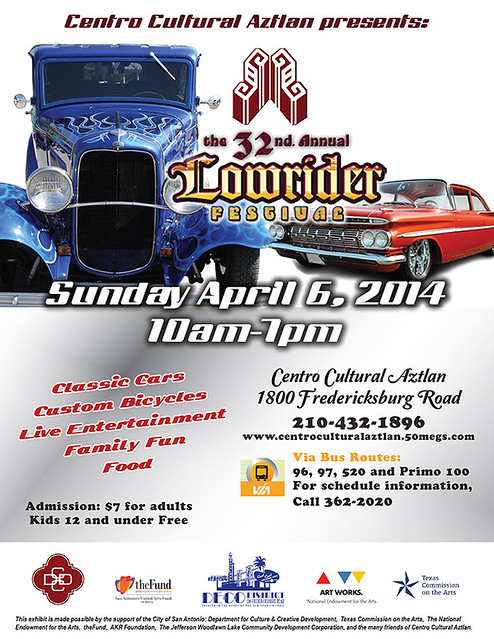 In addition to gallery exhibitions exploring everything from superheroes and mariachis to Día de los Muertos and the Virgin of Guadalupe, Centro Cultural Aztlan’s mission to “support and strengthen Chicano/Latino culture and identity” takes shape in an annual Lowrider Festival presenting tricked-out cars as “mobile works of art.” Emerging from post-WWII-era California and later celebrated in a 1975 anthem by WAR (who happen to be rolling into the Majestic on the night of the festival, see page 10), lowrider culture goes beyond the painstakingly restored, elaborately painted and hydraulically gifted vehicles—it’s a lifestyle. And while that lifestyle—which involves cruising low and slow, gatherings in parking lots and plenty of shoptalk—has struggled with an iffy reputation over the years, enlightened anthropologists add it up to misinformed stereotypes (just ask professor Ben Chappell, author of Lowrider Space: Aesthetics and Politics of Mexican American Custom Cars). More than a show, Aztlan’s family-focused event offers cash and prizes to winners in more than 30 categories (including Best Street Machine, Best Radical and Best Bomb), a custom bike competition, festival fare, arts and crafts from local artisans and live music by Liza Ybarra, Network for Young Artists, Ernie Garibay & Cats Don’t Sleep and Joe Jama & the Proof. $7 (free for kids 12 & under), 10am-7pm, Centro Cultural Aztlan, 1800 Fredericksburg, 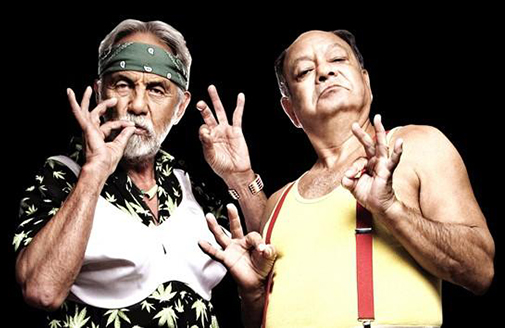 Since the opening credits of 1978’s Up in Smoke, when Cheech Marin worshipfully cleans his busted, classic whip to the tune of WAR’s groovin’ “Lowrider,” Cheech and Chong have developed a prolific professional relationship with the California funk outfit. For the Up in Smoke tour, WAR provides the funky-ass house music for Cheech and Chong’s Chicano-stoner antics, making for a playfully blazed night at the Majestic. Known for their back-and-forth, dazed-and-confused shtick, Cheech Marin and Tommy Chong (now 10 years out of his prison sentence for marketing bongs) have cornered the market on marijuana stand-up, like their classic, who’s-on-first act “Dave’s Not Here.” With WAR at their side, Cheech and Chong’s library of funk-based joke tunes, like “Basketball Jones” will come alive, riffing hilariously over WAR’s vamping rhythms. $40-$75, 7pm Sunday, The Majestic Theatre, 224 E Houston, (210) 226-3333, majesticempire.com.