10 Things You Have to do This Weekend

Maybe it’s that opening on-the-nose Jonathan Livingston ambience or maybe it’s frontman Mike Score’s wail, but AFOS’ lead single “I Ran (So Far Away)” has a bet-the-farm Cinescope grandeur only attempted a couple of other times on their self-titled debut LP and with significantly less success. In hindsight, “I Ran” sounds like the Flock knew they wouldn’t be on our radar for long, but they sure left us a single—and, of course, a silly-ass haircut—for the ages. Score has long since shaved his head, but here’s hoping he’s still giving the people half of what they want. $16, 8pm Thu, 210 Kapone’s, 1223 E Houston, (210) 279-9430, 210kapones.com. —Jeremy Martin

Back in 2012 when the Woodlawn booked RuPaul’s Drag Race winner Sharon Needles to lead The Rocky Horror Show, it seemed like an untoppable stunt. Since then fishing from Drag Race’s exotic talent pool has become a tradition for the theater, which this year cast Courtney Act (as Dr. Frank-N-Furter), Bianca del Rio (as Magenta) and Michelle Visage (as Riff Raff). Born in Sydney, Act rose to prominence on Australian Idol and has opened for Lady Gaga, modeled for American Apparel and even landed on FHM’s list of the World’s Top 100 Sexiest Women. $35-$50, 8pm Thu, 11pm Fri-Sat, The Woodlawn Theatre, 1920 Fredericksburg, (210) 267-8388, woodlawntheatre.org. —Bryan Rindfuss

The Institute of Texan Cultures opens its doors to a bevy of partygoers dressed as famous dead Texans for the fourth annual Dance with the Dead. The adults-only evening includes a live band, Día de los Muertos art exhibit and an art slam organized by Robert Wilkens. For an additional cost, Willie Mendez and Troy Simchak will lead tours of the museum’s haunted “hotspots.” Oh, and be warned: Guests take their costuming seriously, seeking “out the little nooks and crannies of Texas history” in hopes of winning the evening’s famed costume contest. $20-$25, 8-11:30pm Fri, Institute of Texan Cultures, 801 E César E. Chávez, (210) 458-2300, texancultures.com. —Murphi Cook

Self-described “artist/activist” Antonio Serna was born in the Alamo City and now lives and works in New York, where he’s exhibited everywhere from Manhattan’s Judson Memorial Church to the Brooklyn Army Terminal. A member of the group Arts & Labor (founded in conjunction with the New York General Assembly for #occupywallstreet), Serna has conducted research on alternative economic models and developed artCommons, a community art-sharing project launched in Queens in 2013. Working within a wide range of media (including painting, sculpture, found objects and collaborative experiments), Serna often addresses “the concept of progress and the way it shapes and affects the individual, society and culture.” Anchored by a “slightly ambiguous time shift,” Serna’s “Some Kind of Primitive” remixes prehistoric landscapes by introducing dinosaurs to Atari-worthy versions of themselves but also jabs at “survival and violence” via a 20-foot spear the artist reportedly found in Brooklyn. Previously on view at Harlem’s Chashama gallery, the mixed-media show opens at Bihl Haus Arts with a reception enhanced with wine, hors d’oeuvres and live music. Free, 5:30-8:30pm Fri, Bihl Haus Art (inside the gates of Primrose at Monticello Park Senior Apartments), 2803 Fredericksburg, (210) 383-9723, bihlhausarts.org. Through December 13. —Bryan Rindfuss

Published in 2012, Rolling Stone’s list of The 10 Greatest Latin Rock Albums of All Time was controversial, but no one argued with the first choice: Café Tacuba’s masterpiece Re (1994) was a game changer which jumped from alternative son jarocho and industrial metal to bolero and mambo, and from funk and norteña to banda and pop. With their second album, the Mexican quartet (AKA Café Tacvba) left no stone unturned, but the variety of genres was just a detail—the power of Re rested on dynamite songs and superb production by Argentina’s Gustavo Santaolalla, who years later would win back-to-back Golden Globes and Oscars for his scores to Babel and Brokeback Mountain. Twenty-five years after the band was formed, and 20 years after their best album, the two-time Grammy and two-time Latin Grammy winners bring their perfect blend of sophisticated art-rock and visceral mestizaje to San Antonio for their 20re–ct25 Tour, during which they will perform Re in its entirety and (we hope) a few other classics. It’s an all-ages party celebrating the legacy of one of the world’s most original (and still relevant) bands in any language. $30-$55, 9pm Fri, The Aztec Theatre, 104 N St. Mary’s, (210) 812-4355, theaztectheatre.org. —Enrique Lopetegui

Given the Tobin’s other inaugural bookings, the Symphony’s Pops series leans toward the conservative. But the opener is a different matter altogether, with the Symphony inviting swing revivalists Big Bad Voodoo Daddy for a program that aims “to have you swinging in the aisles.” Getting a symphony to “swing” in any vaguely jazz sense seems a dubious proposition. But BBVD have been pulling off this trick with symphonies all over the country since 2005, blending their heavily goateed brand of retro swing into the symphony repertoire on the strength of a program mixing big band jazz, jump blues and crooner ballads. It should prove as lively a way as any to open the Pops season. Fedoras welcome. $25-$85, 8pm Fri-Sat, Tobin Center for the Performing Arts, 100 Auditorium Circle, (210) 223-8624, tobincenter.org. —J.D. Swerzenski 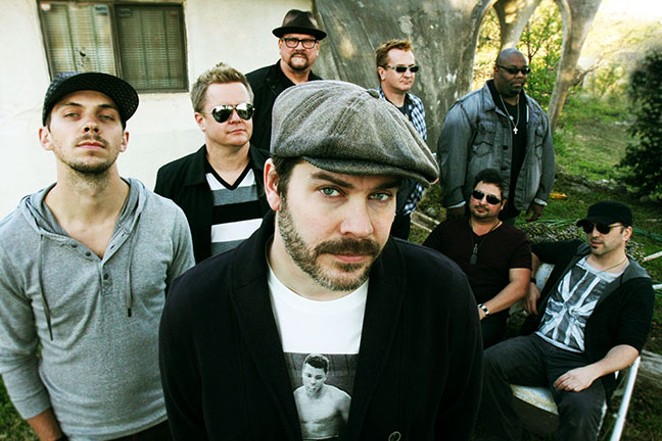 Mingo Fishtrap
This stacked event just might be boss enough to draw the staunchest inner-loopers to venture a bit farther north this Saturday. NOSA (North of San Antonio) Fest is a one-day, all-ages festival which features a live rodeo, a silent auction, carnival games, food by local chefs, prize giveaways and live music from some of SA’s finest, including Fishermen, Bekah Kelso and the Fellas, Octahedron, and Band of Bandits. We are particularly excited to catch Austin soul collective Mingo Fishtrap in this beautiful outdoor space. A portion of the day’s proceeds will benefit the San Antonio Food Bank. $6-$12, 4pm-1am Sat, Tejas Rodeo Company, 401 Obst, Bulverde, (830) 980-2226, nosafest.com. — James Courtney

Check out that sweet set of boo-oo-oobs! Or you know, whichever particular people pieces get you a-goggling. No judgment here—just a shortage of even marginally tasteful seasonal body part puns. Whatever your preferences, All Hallows’ Tease, produced by local burlesque troupe Pastie Pops will give you your money’s worth. Regular cast members Betty Cash, Pelvis Costello, Olympia DeWinter (San Antonio’s 2013 Queen of Burlesque) and Jasper St. James (2013’s Southern Fried King of Burlesque) will be joined by local drag queen Kristi Waters, Dallas dancers Black Mariah and Elle Du Jour and from Austin's Jigglewatts Revue, Lola LeStrange and Layna D'Luna. Austin-based comic Ralphie Hardesty is scheduled to emcee, but Old Scratch only knows how he could hope to keep up with the cavalcade of wordplay on display in that last sentence alone. And if you’re just into burlesque for the body-positive empowerment it offers the performers, yeah that’s what we meant to say too. Happy Hallowiener. $10-$30, 9pm Sat, The Uptown Studio, 700 Fredericksburg, (210) 387-1617, theuptownstudio.com. —Jeremy Martin

James Supa Medrano
“A Strange Odyssey” is a tribute to one of the most influential American directors, Stanley Kubrick, whose films (including 2001: A Space Odyssey and The Shining) broke new ground in cinematography. Artists Justo Cisneros, Daphid Art, Joe de La Cruz, Jason Popguy Ibarra and James Supa Medrano come together for a group show to pay homage to Kubrick. As a complement to the artwork, DJs Galacitcat, Pleasurefaces and Ghostpizza will fill the gallery with tunes and to make things a little stranger, party-goers are encouraged to wear costumes. So tap into your dark side and go as one of creepiest villains of all time, Alex DeLarge from A Clockwork Orange. Free, 7-11pm Sat, Silkwörm Gallery, 1906 S Flores, (210) 607-1322, facebook.com/Silkwörm-Studio-and-Gallery. —Ainsley Caffrey