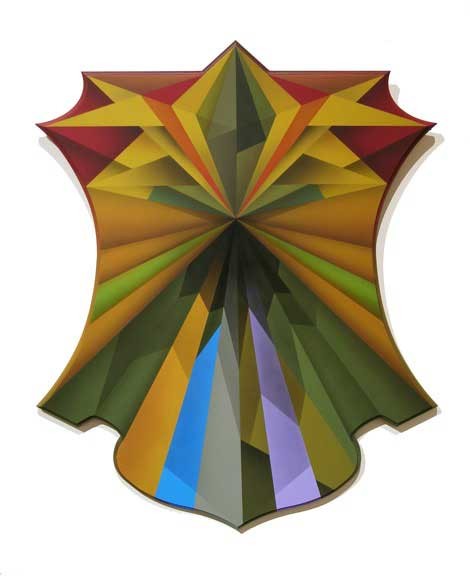 Sweet by Henry Taylor
Last year, the Los Angeles art scene enthusiastically welcomed The Mistake Room — a cultural institution devoted to facilitating “an international program of art and ideas” while empowering “the lives of practitioners of the imagination.” Those familiar with the mission of Artpace — a “laboratory of dreams” founded by the late artist and philanthropist Linda Pace — will likely see TMR director/chief curator Cesar Martinez as a natural fit for the SA institution’s revered International Artist-in-Residence program. As guest curator for the first IAIR exhibition of 2015, Martinez tapped London-based Colombian art star Oscar Murillo, theatrical Houstonite Autumn Knight and LA-based painter Henry Taylor. Dubbed by fans as a “21st-century Basquiat,” Murillo has been known to paint with a broomstick and scrawl words like “burrito” on his canvases, which have skyrocketed into six-figure territory in the recent past. An expected pick for Martinez, Murillo helped inaugurate TMR with a solo show that nodded to the site’s past life as a manufacturing facility. A trained drama therapist, Knight combines elements of performance, video and sculpture in multimedia projects that encourage discourse about emotional, racial and geographic boundaries. Honored in 2012 with a mid-career retrospective at MoMA PS1, Taylor has depicted prostitutes and drug dealers in his figurative yet folky paintings, but does not identify as an “outsider artist.” Free, 6-9pm (artists’ dialogue at 7pm) Thu, Artpace, 212-4900, artpace.org. — BR

One positive side effect of all the SXSW spillover shows we see this time of year — aside from the influx of traveling bands — is that they get local bands playing more frequently, too. The SouthXSouthtown Concert Series features both traveling and local talent, and plenty of it (more than 30 acts in all). The four day affair will feature exciting locals like ska-punk act Kill Liberal and Chicano soul outfit Los Nahautlatos, as well as out-of-towners that include Mothercoat, Japan’s answer to Radiohead, and Roz and the Rice Cakes, a lovable alternative pop act from Providence, RI. $7-$20, 3pm-11pm Thu-Fri, noon-11pm Sat-Sun, Southtown 101, 101 Pereida St., 263-9880. — James Courtney 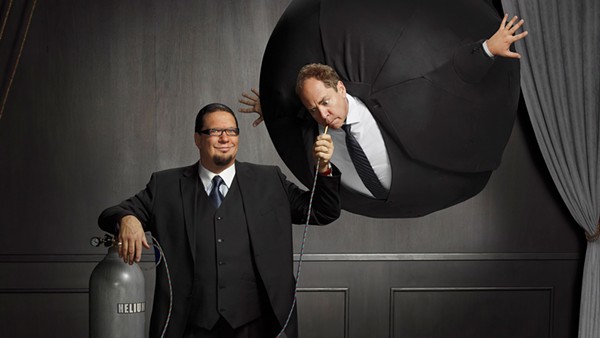 If Penn’s libertarian grandstanding or Teller’s apparent lack of wherewithal to muster the occasional STFU lost a little of their magic over the course of 89 episodes of calling Bullshit! on everything from the Vatican to recycling, here’s a brief rundown of some of their weird and wondrous feats to remind us why we love them. They’ve appeared in music videos by Run DMC, the Ramones and Katy Perry, and guest starred in episodes of The Simpsons, Futurama, The West Wing and Babylon 5. Their direct-to-video Cruel Tricks for Dear Friends (1987) featured VHS-themed pranks, including a fake televangelist who appears to spout satanic messages when played in reverse. Their unreleased Sega CD game Smoke & Mirrors includes a level called “Desert Bus” requiring “players” to drive a passenger bus from Tucson to Las Vegas, in real time, at a top speed of 45 miles per hour. Sure, in one of their tricks they make an American Flag disappear into the Bill of Rights, but in another one Penn shoots a nail gun at Teller’s dick. May they never Get Killed. $49.50-$79.50, 8pm Fri, The Majestic Theatre, 226-3333, majesticempire.com. — Jeremy Martin 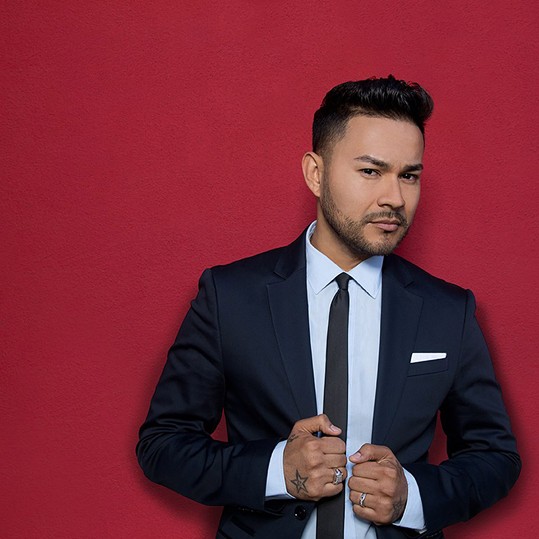 In this third edition of Big League Weekend, the familiar Texas Rangers take the diamond against the Los Angeles Dodgers, one of the most storied franchises in the sport. Coming off a disappointing exit that saw their arch-rival San Francisco Giants take home another title, the Dodgers entered Spring Training intent to live up to their massive payroll. With Yasiel Puig in the lineup, the team boasts one of the most dynamic yet polarizing young players in the majors. When on his game, Puig alone is worth the price of admission, although National Anthem turns by Joe Pags and Frankie J are a bonus. $10-$129, 7pm Sat, 1pm Sun, Alamodome, 100 Montana, 207-3663, bigleagueweekend.com. — M. Solis 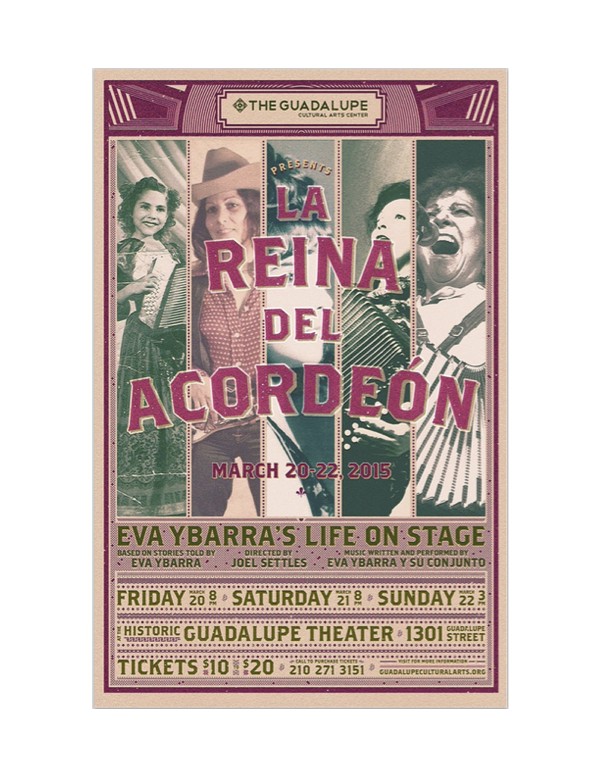 Blown away. That's how Joel Settles remembers feeling after seeing Eva Ybarra perform in October of 2012. At that time, Settles was working as theater arts director at SAY Sí and had booked Ybarra to perform at the nonprofit's annual Muertitos Fest. After the show, Settles pitched a music video concept to Ybarra, who upped the ante by asking: "Why don't you make a movie about my life?" In a series of meetings that followed, the pair dove into an oral history project covering the highs and lows of Ybarra's career, which has included multiple record deals, festival appearances, a teaching gig at the University of Washington and performances that run the gamut from early gigs in Texas dance halls to a New York Times-covered collaboration with the progressive string quartet Ethel in 2008. Although a biopic is still on the table, the duo's endeavor is first taking shape in La Reina del Acordeón — a stage production exploring Ybarra's successes and setbacks via theatrical vignettes, film clips and musical interludes performed by none other than Eva Ybarra y Su Conjunto. $10-$20, 8pm Fri-Sat, 3pm Sun, Guadalupe Theater, 1301 Guadalupe, 271-3151, guadalupeculturalarts.org. — BR 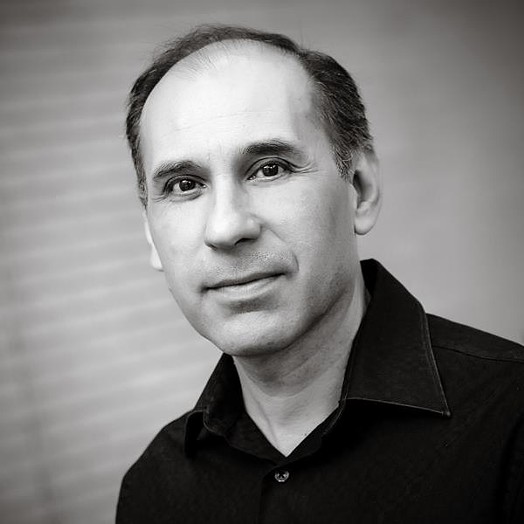 For one weekend only, writer/performer José Rubén De León reunites with pianist Aaron Ellington Prado and bassist George Prado to pay tribute to the ultimate tune of lost romance: the bolero. El Corazón del Bolero pays tribute to genre composers from Cuba, Puerto Rico and Mexico in a collection that offers “solace, company and warmth to the heart” as it drifts through the different stages of love. The trio is no stranger to reviving nostalgic music onstage; previous works include Simplemente Lara, a celebration of Mexican composer/singer Agustín Lara. $15, 8pm Fri-Sat, 3pm Sun, Classic Theatre of San Antonio, 1924 Fredericksburg, 589-8450, classictheatresanantonio.org. — Murphi Cook

Venus at a Mirror by Peter Paul Rubens
From the luscious bellies of the Renaissance to the thigh gaps in contemporary magazines, there’s no doubt that body preferences have shifted over time. In The History of Art: Sexuality and Changing Body Shapes Throughout the Ages, scholar and artist Rowynn Dumont challenges women’s body image through the lens of the past. The workshop explores historic standards and aesthetic values, inviting participants to ask, “Is there a true ideal body type?” Southtown’s Sexology Institute and Boutique hosts Dumont as part of their ongoing education series. Free (reservations encouraged), noon-1pm Sat, Sexology Institute and Boutique, 727 S. Alamo St., 487-0371, sexologyinstitute.com. — MC 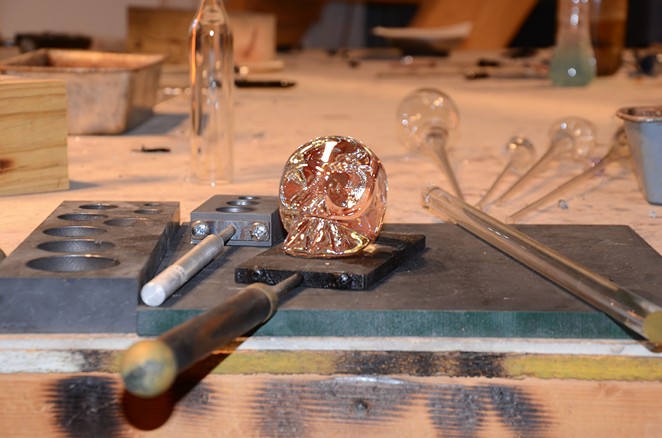 As the name suggests, CAM’s self-guided tour of Open Studios invites art lovers into an array of workspaces not typically open to the public. Organized on a handy map available on CAM’s website, the 2015 tour offers close encounters with the likes of local photographer Ansen Seale (415 Burr Rd.), Glen Andrews and the molten glass slingers of his Caliente Hot Glass Studio (1411 N. Hackberry St.), jeweler Alejandro Sifuentes (418 Villita St. #4) and many more. The intimate alternative to the gallery experience once again wraps up with a Blue Moon-sponsored after party at Zollie Glass Studio (4-8 p.m. at 1428 S. Presa St.). Free, noon-4pm Sun, contemporaryartmonth.com. — BR