Thu 7/9
Drunk with the Starry Void

A scene from Dill’s 2008 performance Divide Light.
New York-based painter, printmaker, sculptor, needlepointist, photographer and performance artist Lesley Dill is getting quite cozy with our fair city. “Lesley Dill: Performance as Art,” a kind of retrospective and overview, has been on view at the McNay since June 10. The exhibit, which focuses especially on Dill’s contributions to performance art, gives us a close look at more than 20 years of output, in almost every medium you can imagine, including drawings, costumes, and clips from her full-blown opera Divide Light, based on the complete works of Emily Dickinson. On Thursday, Dill is coming in for a one-off performance of a new multi-faceted piece, Drunk with the Starry Void, which she created in collaboration with singer-songwriter Pamela Ordoñez and animator Laura Oxendine. Through eight songs, composed by Dill and Ordoñez, and massive projections of Dill’s drawings, animated by Oxendine, Drunk with the Starry Void carries us through “meditations on thoughtfulness, lust, heaven, hell, torture and bliss.” Free, doors at 5:30pm, performance at 6:30pm Thu, Leeper Auditorium, McNay Art Museum, 6000 N. New Braunfels Ave., (210) 824-5368, mcnayart.org. — James Courtney

Due to Second Thursday festivities on the McNay grounds, free shuttle service between the museum and the Sunset Ridge Church of Christ parking lot (95 Brees Blvd.) will be available.

Comedic royalty is on its way back to the Alamo City. Poppy Champlin’s ‘Queer Queens of Qomedy’ is an all-lesbian stand-up tour that blends jokes about life, love and current events with musical parodies sure to make you laugh out loud. “Last year, San Antonio really came out, so this is the first time I’ve brought the same comedians back for a second year,” Champlin told the San Antonio Current. Once dubbed "America’s Funniest Woman" by the late Joan Rivers, Champlin (pictured) has shared the stage with Ray Romano, Dennis Leary, Rosie O’Donnell and more. Her witty weekly web series, “News You Can’t Use,” satirizes recent headlines à la The Daily Show and The Onion. Also returning are Texas Natives Sandra Valls and Vickie Shaw. Valls, originally from Laredo, was featured on the award-winning Latin Divas of Comedy in 2007 and Beaumont’s Shaw can be seen on numerous specials on the LOGO channel. $20-$30, 8pm Thu, Laugh Out Loud Comedy Club, 618 NW Loop 410, (210) 541-8805, lolsanantonio.com. — Luke Anthony Schulte

If you’re not one of Tyler Oakley’s seven-million-plus YouTube followers, his video “100 Things I Did in 2014” will bring you up to speed, albeit without explaining how a quirky gay kid from Michigan became a powerful “digital influencer” who’s met with President Barack Obama, interviewed the First Lady and hosted the MTV Fandom Awards. A self-described “professional fangirl,” Oakley started broadcasting his life online circa 2007 via DIY videos discussing boy bands, LGBT advocacy and lots in between. As The New York Times reported last month, some of Oakley’s young fans have admitted he’s “the very first gay person that they have ever seen.” Admirably, the 26-year-old has upheld that responsibility by raising in excess of $1 million for The Trevor Project, a non-profit organization providing crisis intervention and suicide prevention services to lesbian, gay, bisexual, transgender and questioning youth. Launched in a limited format last year and now retooled as an international tour, Oakley’s “Slumber Party” brings his YouTube antics to the stage in a sleepover-themed show enhanced with behind-the-scenes stories, interactive games and animal-inspired onesies. $29.75-$39.75, 7:30pm, Tobin Center for the Performing Arts, 100 Auditorium Circle, (210) 223-8624, tobincenter.org. — Bryan Rindfuss

When I first dove into SA’s music scene, I didn’t imagine my thirst for off-kilter country would ever be satisfied by local fare. But nothing’s impossible. In this swell showcase, ATX/SA alt-country outfit El Campo — which released Remember, one of the best local album’s this year, back in March — is joined by sadcore country outfit Michael J and the Foxes, led by Michael Carrillo of orchestral-indie darlings Deer Vibes. With an album due out soon from the latter and the former having just completed a victory lap of a tour, it feels like we are in the midst of a Saytown country renaissance. $5, 9pm Thu, Paper Tiger, 2410 N. St. Mary’s St., papertiger.queueapp.com. — JC 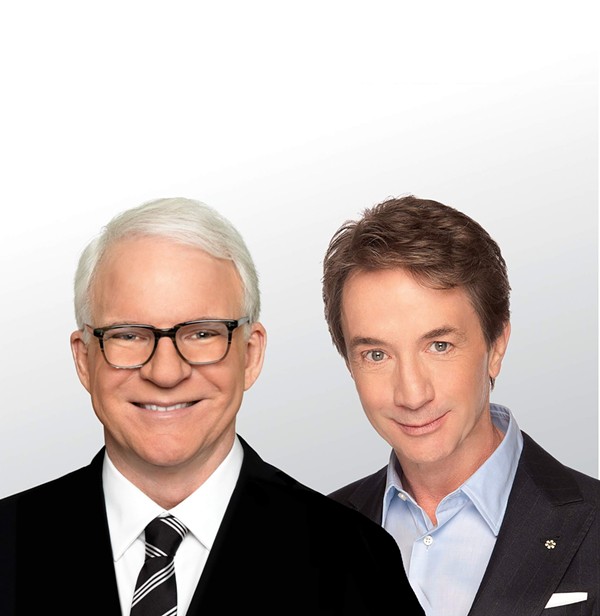 You read that right, not one but two out of Three Amigos will take the Majestic stage Friday in what’s sure to be a, uh, well we’re not sure what exactly, but anytime the minds behind “King Tut” and Ed Grimley come together in the name of stupidity, it’s sure to be a good time. Both men have changed considerably over the years — Martin’s most recent tours have been with his bluegrass band, the Steep Canyon Rangers (who share the bill here, as well) and Short’s most recent screen appearance was as a coke-snorting dentist in a Paul Thomas Anderson adaptation of a Thomas Pynchon novel — but, like their Amigo counterparts, Martin and Short are first and foremost entertainers of the old-school comedian-as-renaissance-song-and-dance-man tradition. Things may get very stupid, but they’ll never be dull. Sold out ($107-$369 at stubhub.com), 8pm Fri, The Majestic Theatre, (210) 226-3333, majesticempire.com. — Jeremy Martin 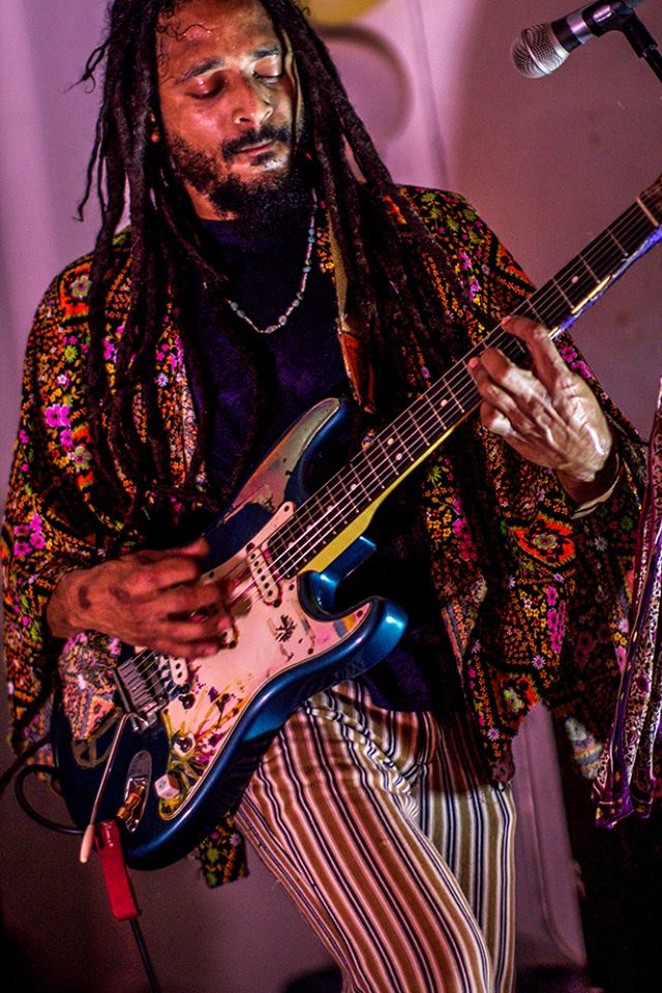 Here’s a recipe for a groovy Friday night for all you head-trippers and vibe-diggers. After pre-gaming with your mind-expanding substance of choice, get yourself (safely) on down to the newly re-opened Limelight. There, you’ll be assaulted by the give-no-fucks surf-stoner punk of promising young SA trio Junkie. As if that weren’t heavy enough, Mockingbird Express, led by guitar wiz and far-out music aficionado Marc Smith (pictured) will be on hand to deliver potent psych-rock-blues medicine in necio doses. SA beach-goth/fuzz-psych act Wild Blood, which dropped its truly rad debut LP back in May, rounds out the bill. $3, 9pm Fri, Limelight, 2718 N. St. Mary’s St., (210) 735-7775, thelimelightsa.com. — JC

Liliana Wilson, Niña Con Cello
A nostalgic, otherworldly quality lilts through the work of Liliana Wilson, an Austin-based Chilean artist who has exhibited work throughout the U.S., Mexico and Italy. Inspired by the subconscious and “spiritual aspects of the universe,” her delicate paintings and drawings of children bring to mind storybook illustrations yet carry with them real-world themes of immigration, repression and injustice. Anthologized in the 2014 book Ofrenda: Liliana Wilson’s Art of Dissidence and Dreams, her mysterious “offerings of hope” come to light in a new retrospective at the Esperanza. Free, 7pm Sat, Esperanza Peace and Justice Center, 922 San Pedro Ave., (210) 228-0201, esperanzacenter.org. — BR

The felt-headed creatures of Avenue Q may look like your friends from Sesame Street, but with fast-talking potty mouths and a propensity for loud sexual intercourse, these puppets are anything but kid-friendly. Following Princeton, a freshly minted adult, and a wily gang of monsters just trying to make it in the real world, the production features three human characters (including an interpretation of Gary Coleman playing a building superintendent) alongside 11 puppets manipulated by wholly visible puppeteers. Jonathan Pennington directs at the Cameo. $20-$33, 8pm Sat, 4:30pm Sun, Cameo Theatre, 1123 E. Commerce St., (210) 212-5454, cameocenter.com. — Murphi Cook

The San Antonio Indie Book Fest brings together more than 30 Alamo City authors for a kid-friendly affair designed to promote local talent and literacy. Offering no shortage of original sci-fi and fantasy, the one-day fest showcases the likes of J.R. Knoll (A Princess in Trade), Eva Pohler (Vampire Addiction) and organizer C.M Bratton, who’ll be on hand with the first issue of her new Plan B: Zombie comic series. In addition to readings, vendors and raffles, the inaugural event includes the announcement of winners of a high school short story contest. Free, 11am-6pm Sun, Wonderland of the Americas, 4522 Fredericksburg Rd., (210) 785-3500, facebook.com/saindiebookfest. — BR

With a firm grip on the title of SA’s Best Burlesque Troupe, Stars and Garters shimmies downtown to do The Vegas Strip, a glitzy show combining variety acts, classic striptease and audience participation. Featuring the playfully named talents of Pystol Whips, Candy Kane and Squirrely Temple, the sultry septet promises to “tease and please” attendees while sharing the stage with a gaggle of guests, including Zombie Bazaar Belly Dance, multimedia troupe Comedia A Go-Go and R&B outfit DevSoul Band. Take it from the gals: You’ll “come for the sin ... and stay for the skin.” $17-$30, 8pm Sun, Aztec Theatre, 104 N. St. Mary’s St., (210) 812-4355, starsandgartersburlesque.com. — BR