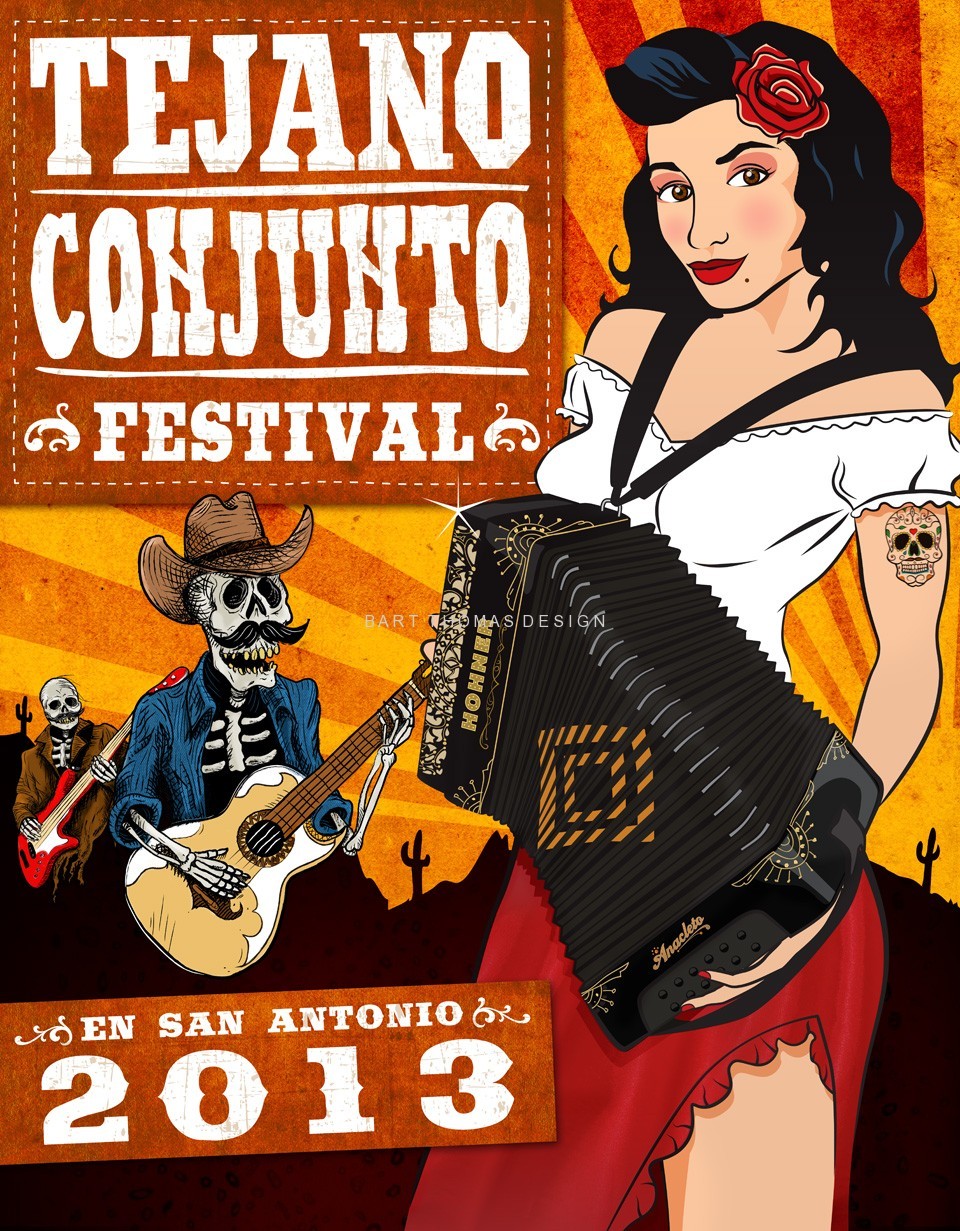 The winning poster of the Tejano Conjunto Festival 2013, by Bart Thomas.

Here's some highlights (in order of appearance) from the 2013 Tejano Conjunto Festival that ended Sunday at Rosedale Park.

SA's own Los Nahuatlatos kicked off the "New Directions in Conjunto" night Thursday at the Guadalupe Theater. Their final song was a new one: "Old School," to be included on their upcoming first album (coming in July, tentatively).

They were followed by Thoze Guyz (Roscoe), who started with a bang: a militant, socially conscious conjunto! But it was too good to be true: soon after you heard César Chávez's voice, we were back at the usual crowd-pleasing, inane cumbia.

Also on Thursday at the Guadalupe, Juanito Castillo was supposed to play with what's probably his 99th band, the so-called Psycho Trip Band, but at the last minute decided to record everything himself and only sing and play accordion live. This is a sample of what he did:

At Rosedale Park on Saturday, Los Badd Boyz del Valle (from Edcouch) almost caused a riot when Lonnie Gonzales (bajo sexto) and brother Carlos (bass) jumped into the crowd and had a wild jam with the fans.

But Sunday is always the best day: that's where the most hardcore, chingones, hard and heavy conjunto masters do their thing. First lesson: Los Desperadoz proved that you can play cumbia with balls. These guys really rock hard, even when they get mellow. I'll only take a Tejano cumbia from them, and only them. Yet, they were at their best with the straight conjunto stuff, and walking in the middle of a conjunto dance was one of the highlights of my weekend.

Flaco Jiménez. Do I need say more? I don't, but I will: great conjunto accordionists are like aging hard-hitting boxers — they may get slow, old, wrinkled, but they never lose punching power. His set with Los Texmaniacs' Max Baca (an animal on the bajo sexto) was one of the best performances I've seen of him.

And then, he called on Dwayne Verheyden, his young Dutch protegé. If Juanito is Esteban Jordan, Dwayne is Flaco, who himself remembered how he met him when he was two years old. Verheyden's father was (and still is) a Flaco fan, and he passed on Flacomania to his son. They didn't play an accordion duel, but with the master's blessing, Verheyden went ahead while Flaco sang. It was good enough for everyone.

Heads up: Catch Juanito Castillo and Dwayne Verheyden on Tuesday, May 28, at the Arneson Theater.