Jessica Elizarraras
Sari-Sari
San Antonio’s expanding palate has been on a slow boil since the late 1970s and the proof lies on the bustling corner of Hildebrand and Blanco. With the opening of Niki’s Tokyo Inn in 1970, and the addition of the sushi bar in 1980, locals got a taste for Japanese fare and by 1983 Tokyo Mart followed.

Early customers according to the staff included war brides and Japanese researchers that lived in San Antonio in the ’80s looking for ingredients they couldn’t find in their new homes. As with the restaurant, which is now seeing generations of families rolling in for a sushi fix, the shop, located behind Niki’s is seeing older women and grandkids coming in for their groceries.

But frequent shoppers to the small bodega are also made up of area chefs, military personnel, foodies obsessing over the next big trend and fans of Japanese anime shows and cartoons. Whether they’re looking for bento boxes seen on Sailor Moon, Orion beer after being stationed in Okinawa, or ramen to test their tonkotsu skills at home, shoppers are still drawn to this tiny Japanese outpost.

Jessica Elizarraras
Tokyo Mart
And if the restaurant wasn’t enough to satiate those cravings, Tokyo Mart also carries futomaki (vegetable rolls) and onigiri (rice balls) on weekends. Call ahead to score your rolls made by Kat Tabuchi, the youngest member of the family. At $2 to $2.75 a pop, the onigiri is filled with tuna mayo, smoked salmon, kombu (seaweed), or bonito fish and it sells out quickly. 825 W. Hildebrand Ave., (210) 736-2111.

The area between Austin Highway and Rittiman Road, adjacent to Fort Sam, could be considered San Antonio’s defacto Koreatown and there’s no better example than at Seoul Asian Market and Café.

Since the 1980s, the shop has occupied a trio of locations in the area, but its most recent iteration is perhaps the most congruous when it comes to dining and shopping. The sprawling aisles are filled with all manners of sauce, pickled root vegetables, noodles and tea, while a small nook carries fresh pastries from Carrolton, Texas. But the real treasure is next door in the now spacious café.

Newbies should know to order at the registers where a few menus can be found. The sizzling bibimbap stone pot should come with a warning sign, but instead the cooks make sure you’re using a sturdy tray. Bigger appetites should order beef bulgogi, which comes piled atop delicately sliced white onions and with as much banchan as you can handle. Take some chapchae to go — trust us. 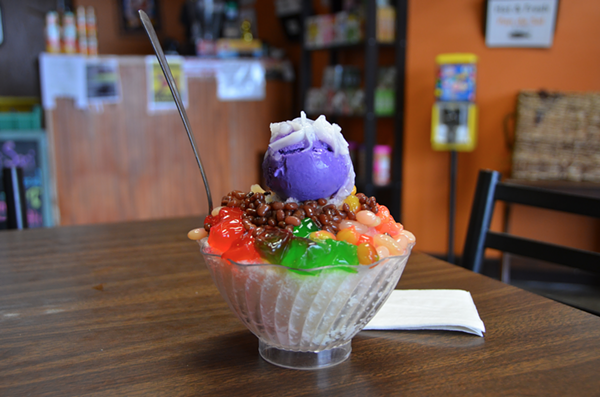 This summer, celebuchef and Travel Channel personality Andrew Zimmern said Filipino food was the “next big thing.” And the owners of Sari-Sari Filipino Restaurant, Market & Bakery think he’s on to something.

Owned by Imelda and Adam Valenzuela since the late ’90s, Sari-Sari started out as a small shop filled with Filipino goods, housewares and décor. In 1998, after two years in business, the Valenzuelas opened the café to feed military and nursing personnel from the surrounding Medical Center. Daughter Camille De Los Reyes remembers the shop from its inception as a small bodega in her parent’s garage.

“It’s about time people found out about our food,” De Los Reyes said.

As Sari-Sari nears its anniversary, the family has been participating in festivals around town, and hosting events at the restaurant including a meet-and-greet for then-councilman Ron Nirenberg during his mayoral campaign. 5700 Wurzbach Road, (210) 647-7274.