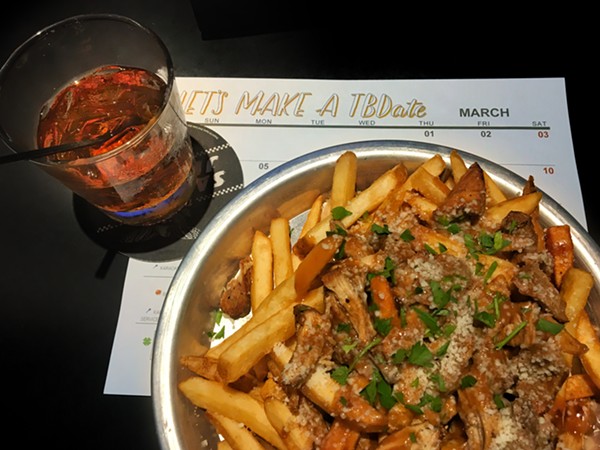 Background: Once a Houlihan's, TBD Bar and Social (no relation to St. Mary's Strip's TBA) opened up this past Thursday with a huge kick off. The bar is a new concept from the creators of Houlihan's and is the first of its kind in the country. If well received, the concept could be launched at other locations across the franchise.

Patrons: The opening weekend crowd was filled with young professionals, college kids, and some older couples. They were all sipping on drinks, munching on snacks, playing life size Battleship, and listening to live performers.

The Deals: There are deals that will change throughout the day. The bar will always have $3 wells (a steal) and a mystery beer for $2. Daily deals include special prices on buckets of beer, pitchers, wings, burgers, and tacos. They will also have trivia night on Mondays, karaoke on Sundays, and live performers on Fridays and Saturdays.

Experience: Going to the bar late on a Friday night it was pretty packed. There were live performers that were stationed at the front of the “indoor patio” area and they were surrounded by giant versions of some of your favorite games. Battleship and Connect 4 are two of the games that seemed to stand out — though there were many others scattered on the patio. The bar runs the length of the restaurant and allows for plenty of space to order drinks. The seating area has booths and tables running along inside and out with servers to take orders for those wanting to skip the bar. The drink menu consists of beer, wine, and signature Houlihan's cocktails like the Long Island Iced Tea Pitchers and margaritas. The food at TBD features tacos, loaded fries, burgers, and wings. I ordered the chili cheese fries, a plate that is easily big enough for two or three and was pretty good for bar food. The rest of the menu food is solid as well — not the best around, though it does the job of soaking up all the booze. Looking at the prices for food and drinks the whole menu is extremely affordable. If you're looking for day drinking, games with friends, and a solid patio, you might want to experiment with TBD.

Erin Winch writes about boozin' in the Alamo City on her blog Drinking In SA. Follow her on Instagram at @drinking.in.sa for more.