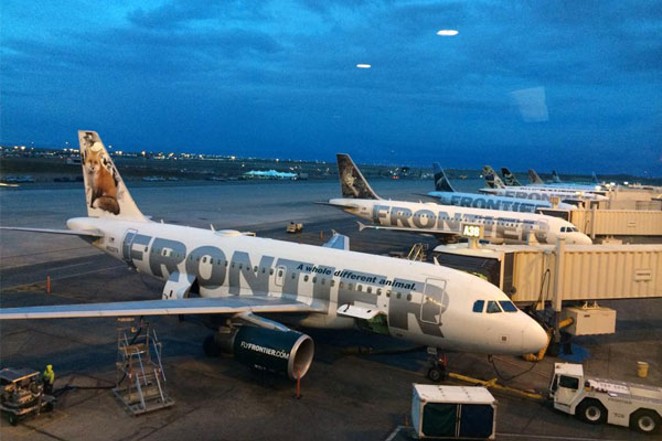 Photo via Facebook
This story originally appeared in our sister publication, Out In SA.

The president of the Royal, Sovereign and Imperial Court of the Alamo Empire is suing Frontier Airlines alleging he was removed from a flight from Washington DC to Denver as a “security risk” because he had a wig in his carry-on bag.

For the past six years, Ivan Cuadrado (a.k.a. Esmerelda Kane-Jaymes) has been a member of the Alamo Empire, an LGBT non-profit that raises funds for local charities. During that time, he has been vice president and currently serves as president. He has also been voted twice to the position of Empress of the Court. “I’ve been raising money for the community for almost all my drag career of 20-plus years,” he told Out In SA.

According to court documents filed last November, “This lawsuit is based on the outrageous conduct of Frontier Airlines on September 12, 2016, when Defendant targeted Mr. Cuadrado as a ‘security risk’ because he chooses to wear makeup and accessories culturally associated with women, removed Mr. Cuadrado from a flight, humiliated him, and denied him rightful compensation under contract and applicable law.”

Cuadrado had been attending a fundraiser sponsored by the Imperial Court of Washington DC. On his way back home, he booked a flight from Washington’s Reagan National Airport to a connecting flight from Denver to San Antonio.

Cuadrado arrived at Reagan Airport in a red, white and blue shirt and a pair of casual athletic pants. He checked a suitcase and kept his orange makeup bag as a carry-on. The makeup bag contained his cosmetics, a blond wig and his crown. Cuadrado also put his cell phone and wallet in the bag when he went through security.

“While waiting at the gate area, I opened my case a few times to check my phone and get my wallet out of it. My wig was showing and people did see it,” he says.

When Cuadrado boarded the airplane he took a window seat in a row where someone was already in the aisle seat. Later, a woman took the middle seat next to him, but soon after stood up and exited the aircraft. A few minutes had passed when the gate agent asked Cuadrado to follow her off the plane.

“I asked the agent what was going on but she did not answer me,” he says. “I was taken back to the gate and I noticed my luggage was being taken off the plane and the plane was leaving the gate. I again asked what was going on and she said, ‘I need to interview you,’ because the flight attendant and pilot told her I was a security risk.”

In the hour that followed, Cuadrado was interviewed and cleared, then booked on another flight but not allowed to board because of a credit card mix-up. Officials from Frontier promised Cuadrado a flight the next day and reimbursement for a night in a hotel. He finally got a flight home the following day but Frontier has never reimbursed him for the hotel room.

Cuadrado is suing Frontier Airlines for violation of the U.S. Code’s transportation nondiscrimination policy; negligence; breach of contract for not paying for his hotel accommodations; intentional infliction of emotional distress; economic and exemplary damages; and attorney’s fees.

“I have never been in trouble with the law and I do not have any criminal background whatsoever, Cuadrado says. “I was discriminated because of my being a drag queen. I contacted a lawyer and we are suing them for discrimination. I read a statement that was prepared during the investigation of the incident and it confirms Frontier knew I had a wig in my bag. I had already passed security and boarded the plane. I certainly was not a security risk. I was singled out because of my costume and accessories.”