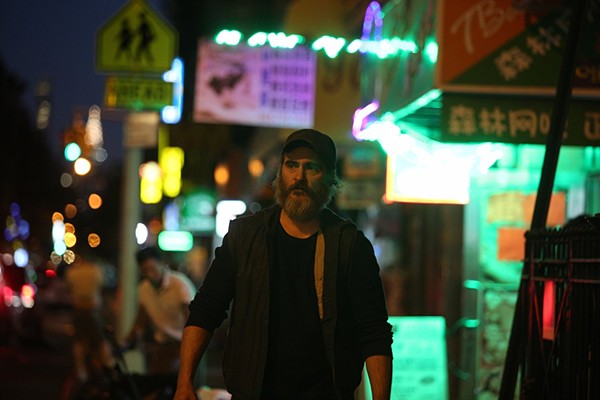 Circa 2010, something snapped inside Joaquin Phoenix. We’re not talking about his intentionally awkward marketing crusade for his mockumentary I’m Still Here where he appeared dazed on Late Show with David Letterman and provoked talk of a mental health crisis. No, the sudden change in him was more profound than any simulated psychosis. It was like he flicked a switch and raised himself to another level as an actor.

Sure, Phoenix was a solid performer before that. He had already earned two Oscar nominations — for Gladiator and Walk the Line — and he’s always been popular with mainstream audiences despite never starring in a major tent-pole franchise. But when he received his third Oscar nomination for his transcendent role in writer/director Paul Thomas Anderson’s The Master, followed by a streak of portrayals of emotionally tormented characters — most notably in Her, Inherent Vice and the underappreciated The Immigrant — Phoenix proved that the gear he is currently operating in isn’t one most actors can shift into easily.

Phoenix doesn’t let up in the least in You Were Never Really Here, a bleak, dramatic thriller that landed him Best Actor accolades almost a year ago at the Cannes Film Festival. Written and directed by Lynne Ramsay (We Need to Talk About Kevin), it’s no surprise an independent film as despairing as YWNRH has rolled out nationwide over the last few months at such a leisurely pace. This isn’t the type of project typical moviegoers are going to flock to see. Nor is it one that even the most hardened cinephiles would probably consider enjoyable to watch.

What can be said, however, about YWNRH — besides praising Phoenix’s striking turn — is that Ramsay has created an unnerving and aggressive cinematic experience. There is a thin layer of grime that coats the narrative of YWNRH that is extremely hard to shake. In fact, in recent years, the only other non-horror films that have felt this demoralizing are Denis Villeneuve’s two 2013 offerings, Prisoners and Enemy, Jonathan Glazer’s 2013 sci-fi drama Under the Skin, Tom Ford’s 2016 crime thriller Nocturnal Animals and Ana Asensio’s 2017 chilling film Most Beautiful Island. Someone grab the soap, stat! 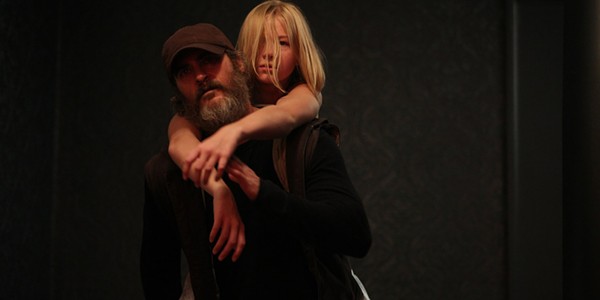 As well casted as those films are, none of them feature a damaged Phoenix at the peak of his career. In YWNRH, he stars as Joe, a disturbed veteran who works for a private investigator to track down missing girls. Joe’s newest mark is a high-profile one. Nina (Ekaterina Samsonov), the 13-year-old daughter of New York senator Albert Votto (Alex Manette), has run away and may have been abducted by an underground sex ring. Armed with a ball-peen hammer, Joe ventures out to reclaim the child, unaware that the situation he is about to confront goes far beyond his paygrade.

A cornerstone of Joe’s character is that he's a flawed man haunted by a lurid past. He’s there to do one job and nothing more. He’s the epitome of an antihero, and Phoenix plays him flawlessly. For example, when he finds Nina (calm down, it’s in the trailer), there are other underage girls in the house, too, whom he could probably save, but leaves them behind, presumably because they are not part of his mission. Joe is like Javier Bardem’s villain in No Country for Old Men or the evil entity in It Follows. They’re soulless, unstoppable forces that aren’t distracted by fear or virtue. What makes Joe distinctive, however, are two traits: the glint of humanity he still possesses deep inside his blackened heart, and the indifference he feels for himself. The latter puts such a heavy weight on Phoenix’s shoulders, one might think he was on the Road to Calvary.

Joe is dead inside, and Ramsay knows precisely how to use that to the story’s advantage. There are scenes in YWNRH where it almost feels like the film could fade to black at any moment. As the dissonant and offbeat electronic score of Oscar-nominated composer Jonny Greenwood (Phantom Thread) pushes Joe to the brink, audiences may wonder if he will make things easier by simply removing himself from the equation. His self-hatred will make it tough for viewers to connect to the character on any meaningful level, but with YWNRH, it’s probably a good idea to keep a safe distance.