In Defense of Chicken on a Stick: History-rich Bites Need to Persist 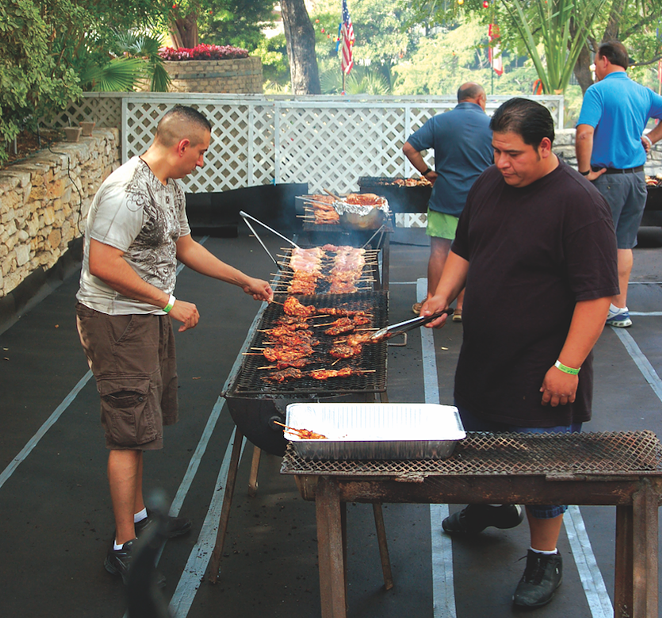 Courtesy of NIOSA
Editor's Note: The following is The Big Spoon, an opinion column on San Antonio's food and drink scene.

Last year, as the city grew to a hum that sounded eerily like mariachis and “Hey Baby Que Paso,” between posts for medals and wreaths and giant hats, I stumbled on this:

“Don’t be a Fiesta fattie.”

It doesn’t really matter where that nasty phrase came from. But it does matter that it struck a chord, a loud plonk, if you will.

Fiesta fare for the uninitiated is a mix of fairground foods meet cultural snacks. And just about every event has a handful or more of booths dedicated to providing San Antonians with bites that can’t be found elsewhere. It was only in the last few years, really, that we started finding chicken on a stick on menus such as Benjie’s Munch, Chisme, and, most recently, Anchor Bar.

And no event does it better than A Night in Old San Antonio.

Now in its 70th year, which is a feat worth celebrating in its own right, NIOSA (pronounced either nee-osah or nigh-osa, up to you) hosts more than 85,000 people throughout four days of Fiesta San Antonio. It’s the largest fundraiser for the San Antonio Conservation Society, and it’s entirely run by volunteers, most of whom devote several sleepless days and nights to building booths, ordering ice, and preparing a lot of snacks.

That’s a lot of Bongo-K-Bobs.

Hands down one of my favorite events — if that hasn’t been made clear thus far — NIOSA packs in a bit of everything. My list of musts includes potato pancakes and bratwurst at Sauerkraut Bend; roasted corn at Mission Trail; freshly made corn tortillas with a little butter at Maria’s Tortillas; anticuchos (shish kebabs formerly made with beef heart in the Peruvian tradition) and tamales at Mexican Market; crayfish etouffee at the French Quarter; Shypoke eggs at Frontier Town; and frog legs and Mr. Chicken at Froggy Bottom.

No, Fiesta food isn’t necessarily the healthiest by any means. But what it often lacks in complex carbs, it makes up for in history. Maria’s Tortillas pays tribute to founder Maria Luisa Ochoa, a housekeeper for Conservation Society president Ethel Harris 30 years after NIOSA launched. You won’t find calf fries — sliced bull testicles, deep-fried for your sampling — these days, but that's because the price has skyrocketed.

Fiesta fattie? Maybe. Novice San Antonio historian? Definitely. If a Night in Old San Antonio provides you with anything — other than an entire meal and then some — it should give you an unparalleled look at San Antonio’s past, present and future.