While it’s usually never great to see “how the sausage is made” in most industries, there’s always been something intriguing — at least from a cinematic perspective — about peeking into the life of an artist and witnessing the inspiration, imagination and sometimes ugliness that permeates the creative process.

It’s especially true when documentarians are able to identify a compelling subject whose passion for their craft knows no limits and details something as specialized as video-game design (Indie Game: The Movie) or method acting (Jim & Andy: The Great Beyond) or even preparing sushi (Jiro Dreams of Sushi). The subgenre is one that extends across countless disciplines – none as tempestuous as visual art.

Although the tortured artist is a cliché that is often overemphasized, a number of biopics and docs such as Basquiat, Pollack, Ai Wei Wei: Never Sorry and Gerhard Richter Painting, have proven that each of these artists’ insight is worthy of a deep dive into learning what makes them tick. The same can’t be said, unfortunately, about Final Portrait, a shallow, British-American drama that offers no real substance behind the paper-thin narrative and characters presented by Oscar-nominated actor-turned-filmmaker Stanley Tucci (The Lovely Bones).

In his first foray into the director’s chair in more than a decade, Tucci explores the connection between Swiss painter and sculptor Alberto Giacometti (Geoffrey Rush) and American writer James Lord (Armie Hammer), who poses as a model inside Alberto’s Paris studio in 1964. “You’re my husband’s next victim,” Alberto’s wife Annette (Sylvie Testud) tells James on the first day he steps into the studio for what is supposed to be a three-hour sitting. 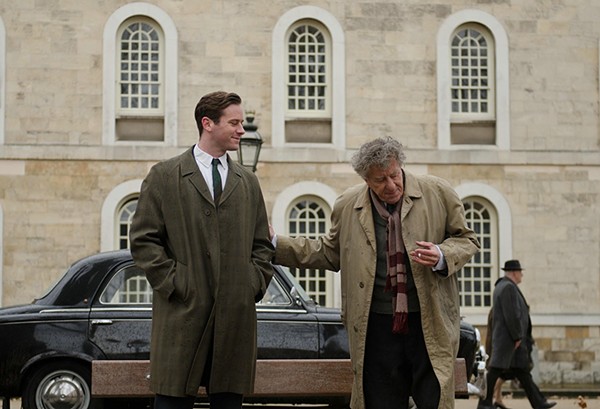 A few hours, however, drag on for nearly three weeks as Alberto, surrounded by dusty sculptures and picturesque albeit dreary production design, transforms into a self-doubting, hopeless curmudgeon who curses at his canvas as much as he actually puts paint on it and delivers empty dialogue like “It’s gone too far; same time, not far enough” when he makes a potential breakthrough. James is also introduced to Caroline (Clémence Poésy), a pretty prostitute Alberto considers his muse and “nighttime companion.”

Alberto is a frustrating character, which was probably Tucci’s desire from the get-go, but the repetition in his process, or lack thereof, which spins in a loop from self-deprecating to compulsive to selfish, also twists him into a fairly unlikeable human being. Rush plays it with compassion much like he did in his Oscar-winning role in 1996’s Shine, but it’s a move that would only be helpful to the story if Hammer’s portrayal of James balanced it in a way audiences could feel a real relationship was present or at least forming.

Sadly, Hammer is a blank slate — a wet napkin dressed in a blue blazer and tie, sitting on a rickety wicker chair watching Alberto dip his brush into gray paint. He’s an emotionally absent pushover, and none of it is very revealing or in the interest of either gentleman. In fact, around day 12, James, through some ineffective voiceover narration, says the time he has spent with Alberto has put a “psychological strain” on him. However, Tucci, who adapted the script from Lord’s memoir A Giacometti Portrait, never gives an indication that James is stressed about the situation he has found himself in. Instead of just telling audiences that the prolonged art project is driving him nuts, it would have been beneficial to see something expressed on James’ perfect face. In Final Portrait, Hammer adequately plays what is ultimately the equivalent of a bowl of fruit.

Aside from a couple of short, thought-provoking discussions between James and Alberto about suicide and artists stealing ideas from each other, not much is memorable during their studio time. What we’re left with is Alberto scowling at his work, threatening to abandon the portrait, smoking, yelling “fuck” a lot, burying his head in his hands in complete anguish and going for occasional walks.

At one point, Alberto declares that “portraits have no meaning,” to which James questions with, “So, what we’re doing is meaningless?” As a moviegoer watching Final Portrait, the theory also rings true.