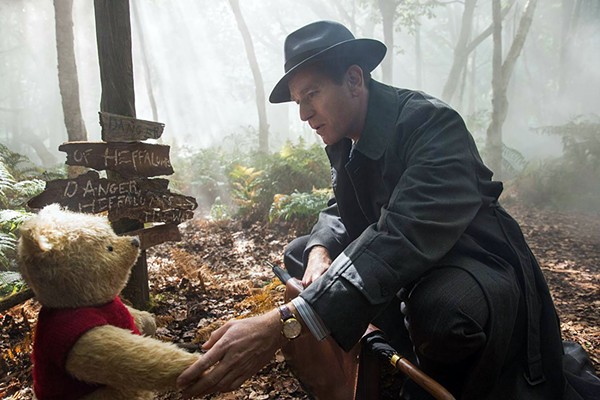 Ewan McGregor (Moulin Rouge!) stars as an adult Christopher, all grown up with a wife (Hayley Atwell) and daughter (Bronte Carmichael) and heaps of responsibility as an efficiency manager at a struggling luggage company in London. His daughter is heartbroken when he has to skip out on their family vacation because his boss orders him to overhaul the budget on his weekend off.

It’s a theme we’ve seen countless times before: the balance of work and home life, and a father who can’t seem to understand which is more important. None of it rings very original in Christopher Robin, although the scenario is more complicated since Christopher is faced with not only family obligations, but also having to “put away childish things” once again when the huggable, anthropomorphic Pooh comes for a surprise visit, which leads to Christopher traveling to Sussex to get him home.

Directed by Marc Forester, who explored this same type of narrative in the 2004 fantasy biopic Finding Neverland about Peter Pan creator J.M. Barrie, Christopher Robin doesn’t break any new ground with its human characters, but there is plenty to love when Pooh, Tigger, Piglet, Rabbit, Eeyore and the rest of the Hundred Acre Wood gang come out to play.

The appearance of these computer-generated, vintage-looking stuffed animals is flawless, and their interaction with Christopher provide some of the best examples where live-action meets animation in recent memory. It feels like the actors and animated characters are inhabiting the same realm, which is a testament to the incredible creativity and realistic design by VFX studios Framestore and Method Studios.

As a family-friendly film, some viewers might be a bit turned off by the gloomy, quiet nature of the picture as a whole (Christopher Robin is more Where the Wild Things Are than it is Alvin and the Chipmunks), but the charm is never lost when Pooh is delivering one of his clever Poohisms (“People say nothing is impossible, but I do nothing every day”) or even when Eeyore is sulking in sadness. If anything is impossible, it’s not being enchanted by the film’s many adorable qualities.