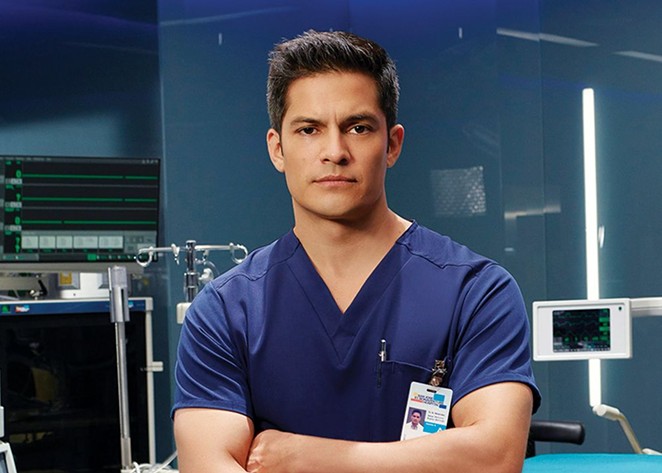 In the hospital drama The Good Doctor, actor and San Antonio native Nicholas Gonzalez plays Dr. Neil Melendez, an attending surgeon who manages the surgical residents at the fictional San Jose St. Bonaventure Hospital. Season 2 of the TV series begins tonight (Sept. 24) on ABC. At the end of the first season, Dr. Melendez has learned how to trust his residents more, including main character Dr. Shaun Murphy (Freddie Highmore), whose autism and savant syndrome makes him a medical genius.

During an interview with the Current last week, Gonzalez, 42, who graduated from Central Catholic High School in 1994, talked about what makes The Good Doctor different from other hospital procedurals, explained how he was able to balance the production of two TV shows, and shared why he thinks his animated show Bordertown was cancelled after only one season.

What can fans of The Good Doctor expect from Season 2 and your character Dr. Melendez?
They’re going to see Melendez in a bit of a transition in a sense. He is no longer with his fiancée (Jessica Preston played by Beau Garrett). He’s decided that while he wants children at some point in the future, he still needs to learn how to be a good husband. For him, medicine is who he’s married to right now. He realizes that’s where his focus needs to be. We’re going to see more of [Melendez’s] home life. There is going to be a nice little surprise in the first few episodes. I’m really excited to see that world get fleshed out.

What do you think makes The Good Doctor different from other hospital TV dramas that have come before?
I think sometimes the hospital dramas can get a little soapy. They can gloss over the medicine. I think we give a healthy dose of it. These are very smart and high-end doctors. But we also give a bit of character. We give a peek in to their home lives and their romantic relationships and the real grappling that takes place in these doctors’ minds, whether their fighting with morals or office politics.

As you read the script for Season 2, how did you react to the decisions the writers made with your character? Did you get excited about the things you liked and groaned at the things you didn’t?
Well, it’s a collaboration. I think so much attention gets thrown to the actor that we forget about the producers and writers. All these guys have such an input in building this story. I’m just a part of it. For me, if there is something I don’t like or that doesn’t resonate with me and the character, that’s an easy conversation where I would call up [executive producer] David Shore and we’d talk about notes. He sure as hell doesn’t need notes because he is brilliant, but we talk about it. But there are sensibilities that are connected with [Melendez] that I know because I live in his skin.

You’ve done a lot of TV shows in your career – some that last a few episodes; some that last a season or two. When does working on a TV show feel like home and not just another gig? I’m assuming you felt that when you were working on Resurrection Blvd. back in the early 2000s, yes?
I’ve had some moments on different shows over the years, but feeling like a true family where everyone comes together, the last time for me was probably Resurrection Blvd. Nothing has come close to that feeling of family and camaraderie until [The Good Doctor]. It’s a different kind of connection, but it feels like family. It feels like home to me.

Another show you were involved in recently was the animated comedy Bordertown, which only lasted one season. Why don’t you think audiences responded to it as much as you would’ve liked?
I think the audience responded, but I don’t think Fox did a lot for it. There wasn’t a lot of publicity that could’ve been done. [Executive producer] Seth MacFarlane surely didn’t do a lot of publicity or talk about it. We didn’t get a lot of help. Once the show [got cancelled], you started to see how timely we were. We had a ridiculous [U.S. presidential] candidate running with the promise of building a border wall. If anything, I think the world needs [a show like Bordertown] right now. It’s through humor that you can show just how ridiculous the situation is that we’re currently in.