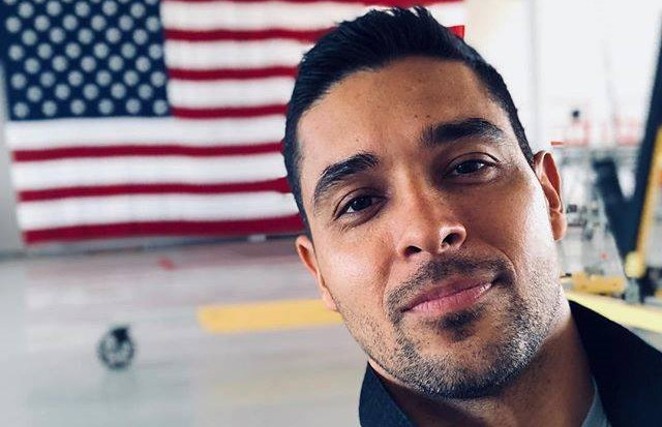 Courtesy of Wilmer Valderrama
He might be best known for his role as Fez on the sitcom That ’70s Show and for the last three seasons as special agent Nick Torres on NCIS, but the entertainment industry isn’t the only place actor Wilmer Valderrama has been making some major waves in the past few years.

In 2016, Valderrama, along with actress America Ferrera and actor/director Ryan Piers Williams, co-founded Harness, a nonprofit organization connecting grassroots leaders and pop culture influencers with communities of color to respond to the shifting political climate after the last presidential election. Valderrama also serves on the board of Voto Latino and is the spokesperson for the Congressional Hispanic Caucus Institute.

In between doing interviews for the newest season of NCIS and encouraging people across the U.S. to vote in the midterms, Valderrama, 38, took some time to talk with the Current earlier this week about why voting is the most patriotic thing an American citizen can do. He also shared his thoughts about the criticism celebrities sometimes receive from people for voicing their political opinions. Valderrama will spend Election Day in Houston where he will continue to urge registered voters to get to the polls.

How will you define victory on Tuesday? Is it about getting the politicians you want elected in office or is it about getting more young Latinos out to vote?
It’s about the statement that we make as a community. It’s about what we say when we stand up together. It’s about going out to vote and doing the most patriotic thing we can do and continue to exercise the gift we have been given. It’s time that we have a seat at the table and help shape the country. [Latinos] are on the road to become the majority in this country. You’re talking about a level of influence that will make America what it is. That’s something Latinos should feel very proud of no matter the outcome of [the midterms].

Only 21 percent of Latinos who were eligible to vote in the last midterm election in 2014 actually voted. Do you think our political parties have done enough in the last four years to encourage Latinos to get to the polls Tuesday?
Honestly, I wish I could say Republicans and Democrats have done enough to get people to the polls, but I would have to say the people have done more than anybody else in talking to one another and pushing one another to show up. I would say our nonprofit organizations and our schools have done so much to get everyone fired up and involved. I also have to give a lot of credit to my colleagues – the artists and athletes who have amplified the urgency and told everyone to go vote.

How do you respond to critics on the right who look at celebrities like you and America Ferrera and LeBron James as only entertainers and not people who should share their political views? I mean, earlier this year, Fox News host Laura Ingraham famously told LeBron to “shut up and dribble” after he criticized President Trump.
It makes me laugh. People forget that [celebrities] are also human beings. We’re also citizens of the United States. And we also pay taxes. So, why wouldn’t we use the platform we’re given and be a part of the change? Being an artist or an athlete doesn’t make us above anyone. It just gives us the ability to live up to our dreams – the American Dream. If anyone has an opinion about [celebrities] getting involved and amplifying common sense and logic, I promise I pay a lot more taxes than a lot of the people that are hating. I have the right to share my opinion.

Here in Texas, nearly 5 million Texans voted during early voting. What do you think that says about voter enthusiasm, and do you think that favors one party over the other?
I think it says that people understand the stakes of just being involved on a national level. I’ve seen the numbers in Texas – young voters went up 500 percent and Latinos went up 200 percent. This should be a celebration. No matter what you believe in, you have to celebrate the fact that you can vote. In some countries, a vote doesn’t mean anything. I’m talking from experience. I’m Venezuelan! Tuesday should feel like a holiday – to be able to cast a vote and actually be counted.

For those registered voters who might be reading this and aren’t sure if they’re going to have time to get to the polls to vote on Tuesday, why should they make it a priority?
This is a critical and historic time for our future. If you live in a household with five people and two of those people are eligible to vote, those two votes are representing a household that is going to be affected by legislation and laws. Voting is a responsibility. If you’re not voting in your house and you’re the only one that can vote, you’ve weakened the voices of the many thousands of people who, unfortunately, can’t speak for themselves at this moment. So, just for a second, remove yourself from your body and cast your vote on behalf of your mom or your dad or your grandparents. Make it a personal vote.