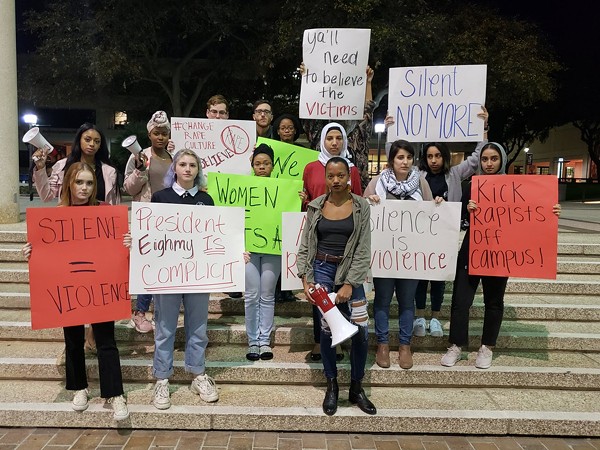 Twitter / RonSmith79
Forty to fifty students at the University of Texas at San Antonio chanted "change rape culture" and "We believe you" as they marched to the Student Union's annual Light the Paseo on Thursday to protest against sexual abuse occurring on college campuses.

This protest comes after Kimiya Factory and Taylor Waits sat down with KENS5 and came out as the women behind the flyers posted on campus last week.

Factory stated the group held protest as a way of "coming out" and telling the world who they are. This protest was based off fliers the group posted in bathrooms days before Thanksgiving.

"We are the women of UTSA. We are fearless and we want to hear your story. We want to make sure you're safe and your story matters as a victim," Factory said.

Waits added, "The point of the protest was to bring awareness to the prevalence of rape culture and how we all contribute to it. By disrupting such a public space with this topic we essentially got the word across. It was beautiful."

Factory also posted a thread on Twitter thoroughly explaining why the group protested.


*SIGH* After being asked several times why we protested last night under the circumstance that we did although #rapeculture forces us to explain these things time and time again , here’s a whole thread.

1. Rape is rampant at Universities across the country , and when women I loved, knew and sat by in class every day shared their pain with me, I felt their pain too. I couldn’t stand it.

2. So why would I stand it ? When I’m entitled to my freedom of speech and I could stand as an ally? Myself and the Women of UTSA decided it’s time we were concerned with the VICTIMS safety once coming forward or dealing with the emotions that come with rape.

3. We listened and hurt and allowed ourselves to imagine what someone who endured rape has to possibly go through for the rest of their life, as each woman shared such a sacred story.

4. The #ChangeRapeCulture initiative we are challenging everyone with is to worry less about what the victim is wearing or what the victim was drinking , and more so how the person’s life has been changed. Especially when forced by society to “keep the peace” for the sake of an

education or degree. It’s time to love and begin to heal with the people who re-visit an experience that NO ONE should ever have to endure.

Any victims of Sexual Violence,rape, Assault or Abuse,we care about how you can begin to heal and we care about you.
Your safety should be the world’s priority,regardless of the circumstance.
I am here for you.We are here for you. We love you.

Protestors made their way through the crowd on the Paseo chanting and holding up fliers to gain the crowd's attention.

DJ Gumby, emcee and musical host of the event, was allegedly instructed by officials to turn up the volume of the music playing in order to drown out the protest.

"We were battling with the DJ, trying to chant," said Factory.

The group gathered in front of the performance stage and started to chant "no means no" when UTSA police were allegedly called and surrounded the crowd.

Factory said from there, the protest continued for a couple more minutes and ended peacefully as the group made their way out of the Paseo.

LT Robinson, interim dean of student affairs, allegedly confronted the group after the protest, reconciling with protestors and wanting to speak with them. Factory stated that she and Waits have not talked to Robinson and President Taylor Eighmy yet, but plan to do so soon.

"[The protest] was very successful," Factory said. "We wanted to show the university and show the people there, who even do the same crime, that as long as we're on campus [sexual assault] is not going to happen on our watch."

University of Texas at San Antonio

5 articles
Stay on top of San Antonio news and views. Sign up for our Weekly Headlines Newsletter.
© 2022 San Antonio Current