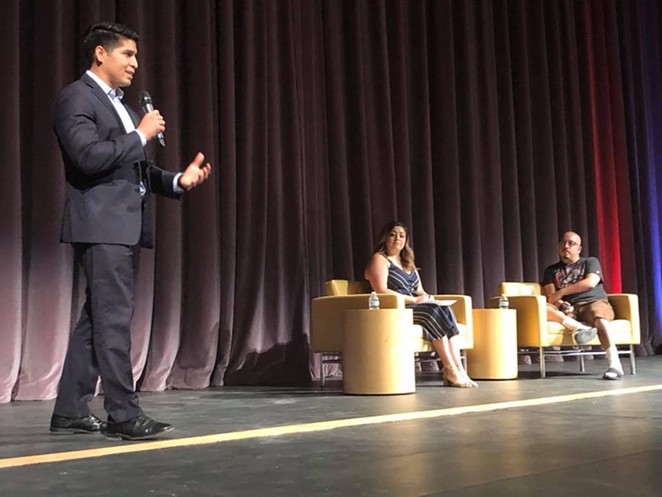 Courtesy of Rey Saldaña
Editor's Note: The following is City Current, a column of opinion and analysis.

Not because the funds won’t help fill hotel beds, sell sugary margaritas and fatten the wallets of River Walk servers. They will.

Not because they won’t aid the city in staying competitive with other tourist destinations like Denver, New Orleans and Napa, which use similar funding mechanisms. They will.

The problem is that a portion of the money also could have aided a vulnerable local population for whom convention expense tabs, leisurely barge rides and scenic hotel views simply aren’t a reality.

Councilman Rey Saldaña pushed to make the newly approved “tourism public improvement district,” or TPID, more than just another corporate handout by dedicating some of the collected fees to groups helping people who are homeless.

In the end, Saldaña was unable to convince his colleagues to delay the vote so the city could carve out a stake for those groups. He cast the sole vote against TPID.

That’s unfortunate, because despite innovative local efforts to help people struggling with homelessness, numbers suggest the problem’s only getting worse here.

This May, volunteers and police counted a total of 3,066 homeless people in Bexar County, up 12 percent from 2017. Most of that hike was in the unsheltered homeless population, which increased 23 percent year-over-year.

What’s more, San Antonio’s rising housing prices and a steady influx of new residents both hint that those numbers will continue their upward creep.

If there was any positive to Saldaña digging in his heels, it was that other council members pledged to have further discussions on homelessness. Mayor Ron Nirenberg asked the city manager’s office to present council with new funding recommendations for homelessness-aid groups before spring’s budget review.

We’d like to believe all that sentiment was sincere and that, ultimately, it will yield a breakthrough in dealing with this persistent and preventable problem.

But Saldaña’s solution wasn’t some nebulous, way-down-the-road solution. By piggybacking onto the TPID, it could have meant a substantial funding difference starting with the first hotel cash registers to ka-ching after its passage.

A memo from outbound City Manager Sheryl Sculley warning council against reworking the TPID likely contributed to the cold feet. In it, she asserted that carving out funds for homelessness-aid groups so close to the measure’s passage would require a delay and possibly derail the whole thing.

However, such a pause wouldn’t have been a disaster. A few weeks wouldn’t have allowed New Orleans or Napa to poach all of San Antonio’s conventions for the next five years. And the notion that the hospitality industry would walk away from the deal if forced to give up a share? Well, that’s simply laughable.

During his mic time at Thursday’s council meeting, Saldaña predicted that if council sat out this chance to secure additional funding for homelessness-aid groups, it would eventually find itself back in the situation of scratching up new dollars to help address the problem.

Saldaña is council’s longest-serving member, and term limits will make his current term his last. That means he may not be around to be part of that deliberation. But when that time comes — possibly with much tougher choices to make — no one can say he didn’t give fair warning.