All I Want for Christmas Is a Few Movies: Nine New Releases Vying for Your Attention This Holiday Season

There’s a reason to be joyful and triumphant this holiday season if you plan to go to the movie theater between now and Christmas Day. Nine movies (eight theatrical releases and one Netflix original) will hit their respected platforms from December 19 to 25. This includes a political dramedy, an intergalactic robot war, an adventure with a deep-sea superhero and a musical sequel more than half a century in the making. Film buffs will have plenty to watch before unwrapping more gifts and tamales. Of the nine films, the Current was able to review seven (Second Act and Holmes & Watson weren’t screened for critics on time). See which of the new releases will make our nice list this year and which will get a crusty lump of coal in its stocking.

Walt Disney Studios
Fifty-four years after the original Mary Poppins hit the big screen and won five Academy Awards, including one for lead actress Julie Andrews, the title English nanny has made a comeback and is as magical as ever. Directed by Oscar nominee Rob Marshall (Chicago), the enchanting sequel doesn’t necessarily live up to the 1964 version, but it achieves the same spirit with ease. With a catalog of catchy original songs, a screenplay filled with rewarding and wholesome themes and a mixture of live-action and hand-drawn animation, Marshall gives the musical a timelessness that will live on for generations. As the new Mary Poppins, actress Emily Blunt (Into the Woods) captures Andrews’ charm and composure, and Broadway star Lin-Manuel Miranda does what he does best and belts the heck out of Marc Shaiman and Scott Wittman’s original songs like “Underneath the Lovely London Sky” and “Trip a Little Light Fantastic.” The most heartfelt lyrics, however, are found in “The Place Where Lost Things Go,” where Blunt sings sweetly about the importance of embracing memories. Opens at theaters December 19.

Warner Bros.
If Aquaman has anything going for it, it’s the fact that it fully embraces just how ridiculous it is. Taking a cue from rival company Marvel when it released Thor: Ragnarok, DC Comics is playing up the kitsch with the story of a titular half-human, half-Atlantean beefcake (Jason Momoa) who journeys to the underwater nation of Atlantis to claim his throne as king and save the planet from a war between land and sea. As the sixth installment in the DC Extended Universe series, which started five years ago and has only produced one bona fide winner (Wonder Woman), Aquaman is the closest the comic-book trailblazer has gotten to actually putting up a good fight in the superhero arena since the Amazonian warrior princess hit pay dirt last year. With that said, however, Aquaman is a CGI-heavy, bloated mess. DC apologists will likely commend director James Wan (Insidious) for at least creating something watchable (there are a few exciting action sequences), but there’s no excuse for something with a $200-million budget to have such B-movie aspirations. Opens at theaters December 21. 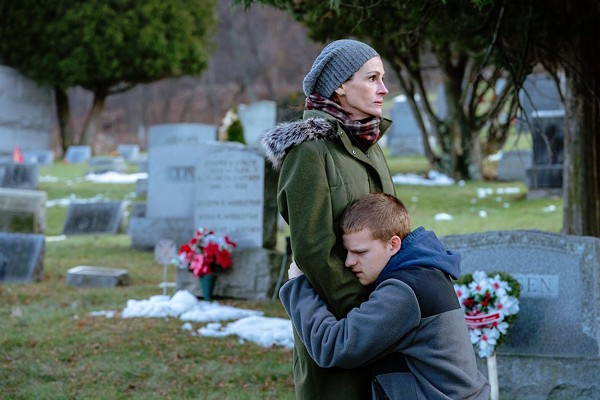 LD Entertainment
In the last two years, actor Lucas Hedges has become a force in Hollywood — from his Oscar-nominated role in Manchester by the Sea to his smaller but significant contributions to two Oscar-worthy pictures last year: Three Billboards Outside Ebbing, Missouri and Lady Bird. This year, Hedges continued to work on top-tier dramas, but Boy Erased and Mid-90s — although reviews were mostly positive — didn’t register with many moviegoers to a larger degree. Unfortunately, the same can be said for his final 2018 film Ben Is Back, a satisfying albeit slight story about a drug-addicted teenager who returns unexpectedly to his family (Julia Roberts plays his mom) on Christmas Eve after a stint at a longterm treatment facility. Hedges and Roberts are believable as mother and son and share some touching scenes, but writer-director Peter Hedges (Lucas’ real-life father) can’t find the perfect balance connecting the melodrama and the darker edges of the drug trade he tries to tread. Nevertheless, like Steve Carell in Beautiful Boy, Roberts effectively depicts a devoted parent who would do anything to save her child. Opens at theaters December 21.

Netflix
If Danish writer-director Susanne Bier has a filmmaking forte, it’s her ability to create impassioned relationships between her characters. In Bird Box, Bier, sadly, doesn’t get the opportunity to craft any meaningful rapport among the motley crew she assembles for the first horror movie of her career. Adapted from the 2014 post-apocalyptic novel of the same name by Josh Malerman, Bird Box is oddly similar to filmmaker M. Night Shyamalan’s terrible 2008 thriller The Happening. Oscar winner Sandra Bullock (The Blind Side) leads an impressive cast, which includes Sarah Paulson and John Malkovich, in a fight for survival when an unknown entity compels the world’s population to commit mass suicide if they catch a glimpse of whatever it is. While some psychological thrillers featuring unseen evil like The Witch, It Follows and It Comes at Night are effective, Bird Box doesn’t allow viewers to invest much in its cast. In this case, an ominous atmosphere just isn’t enough. Available on Netflix December 21. 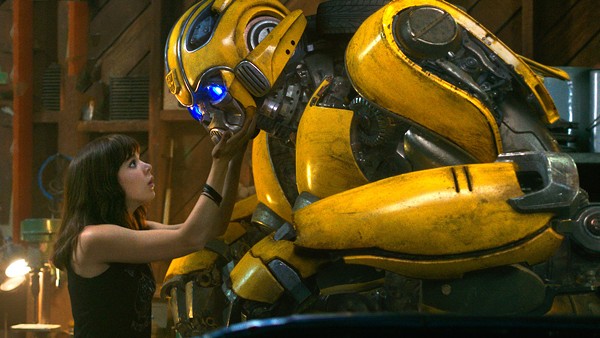 Paramount Pictures
As the first spinoff to come out of the Transformers movie franchise, two-time Oscar-nominated director and animator Travis Knight (Kubo and the Two Strings) has managed to distinguish Bumblebee from the cinematic trash heap of spare parts that director Michael Bay has produced for the past decade. One could almost imagine Bay walking out of the theater after seeing Knight’s standalone movie and thinking, “Oh, so, that’s how you’re supposed to do it!” Bumblebee is such a nostalgic delight, not even a clunky performance by John Cena can ruin it. Set in 1987, the film stars Oscar nominee Hailee Steinfeld (True Grit) as Charlie Watson, an outcast teen who discovers Transformer B-127 (aka Bumblebee), a yellow VW Beetle sent to Earth to find refuge after a war with the Decepticons. When he is tracked down, he and Charlie must find a way to outmaneuver the villainous robots and the U.S. military ready to destroy him. Borrowing from classic films like WALL-E, The Iron Giant and King Kong, Bumblebee is the Transformers movie fans have always wanted. Opens at theaters December 21.

Universal Pictures
Oscar-winning director Robert Zemeckis (Forrest Gump) has his heart in the right place, but his love for computer-generated characters like the ones he utilizes in The Polar Express and Beowulf has finally caught up to him. Welcome to Marwen is based on the true story of Mark Hogancamp (Steve Carell), a New York resident who, after a vicious attack leaves him brain damaged, finds comfort in interacting with a doll-sized, WWII-era town (and its action-figure residents) he builds in his backyard. Mark’s life is a fascinating one that is portrayed wonderfully in the 2010 documentary Marwencol. In the fictional take, much of the emotion and focus on personal recovery is dropped in favor of the action flick that competes simultaneously with Mark’s central narrative. While Zemeckis and co-writer Caroline Thompson (Corpse Bride) seemed like they could add something special to the stranger-than-fiction story, the blurred lines between reality and imagination make for a tonal dilemma the film is unable to solve. Opens at theaters December 21.

Annapurna Pictures
In the opening scene of Vice, Oscar-winning filmmaker Adam McKay’s biopic on former U.S. Vice President Dick Cheney (Christian Bale in an Oscar-worthy performance), Secret Service agents urgently escort the VP into the President’s Emergency Operations Center on the morning of 9/11. There, he takes control of the grave situation and declares to his military leaders that they “have authorization to shoot down any aircraft deemed a threat,” a decision on the rules of engagement normally made by the President. In Cheney’s world, McKay shows audiences just how much influence the VP had in the administration and does so with a sharp and scathingly witty script. Politics is a whole different game than McKay tackled in his last film, 2015’s The Big Short, on the imploding housing bubble, and he came ready to play. Cheney’s wraithlike rise in the ranks saw him turn the “nothing job” of VP into one of incredible depth and power — like a cosmic comic-book villain who devours planets — and McKay’s foray into political theater is captivating, outrageous, satirical gold. Opens at theaters December 25.

STX Entertainment
Actress Jennifer Lopez proves she’s Jenny from the Block when she tries to use her street smarts to climb the corporate ladder and start a professional career with a fabricated resumé. Directed by Peter Segal (Get Smart), the romantic comedy co-stars Vanessa Hudgens (Sucker Punch), Milo Ventimiglia (TV’s This Is Us) and Leah Remini (TV’s Kevin Can Wait). Opens at theaters December 21.