Get It While You Can: Taco Fest Offers One of the Final Opportunities to Party at Historic Maverick Plaza, For a While Anyway

The 2nd annual Taco Fest, which takes place Saturday, April 13, is among the last opportunities to celebrate that take on local culture in Maverick Plaza as we know it. The landmark — perhaps best known for hosting Fiesta’s Night in Old San Antonio (NIOSA) — is slated to undergo a $12 million, two-year revitalization that includes structural updates, better lighting and three new restaurant concepts.

Chef Johnny Hernandez of Grupo La Gloria, who is heading the culinary end of the $7.6 million project, said preliminary construction will begin late in April, following this year’s NIOSA. The City will begin archaeological testing for Maverick Plaza after June 1, with building demolition and new construction estimated to begin in 2020.

“I think there’s a lot of excitement around [the revitalization],” Hernandez said. “The modern approach to food and art will still respect the place that La Villita is.”

Though Maverick Plaza will remain closed during construction, the surrounding businesses, artisans and restaurants like the Fig Tree Restaurant and Little Rhein Steak House, are expected to remain open. The City will invite residents to voice some of their opinions on design during public input meetings, which are slated to begin in May.

Now in its second year, Taco Fest — of which the Current is a sponsor — also will serve up live music from more than 20 alt-Latino bands and a selection of brews, wine and cocktails.

Attendees will have a chance to vote for their favorite eats and decide who makes the best tacos in San Antonio. Event proceeds will benefit Inner City Development, a nonprofit that provides local, emergency and educational services to historically underserved Westside neighborhoods.

“We’re always daring to do something different, and we’re excited to give everybody a new experience,” said Jacob Gomez, owner of Big Poppa’s Tacos, which will offer classic tacos asada and pastor, topped with Takis or Hot Cheetos. “We’ve been doing this for a while now, but I know there’s a lot of people in San Antonio who still haven’t tried it.”

When Maverick Plaza at La Villita reopens in 2021, Hernandez will helm a currently unnamed Mexican restaurant concept. The hacienda-style eatery will explore the evolution of Mexican cuisine, from its roots in Mesoamerican cultures to the lasting impact of Spanish colonization. The two other restaurants are Acequia, a restaurant from chef Elizabeth Johnson of Pharm Table, and an untitled German-style beer garden from chef Steve McHugh of Cured. 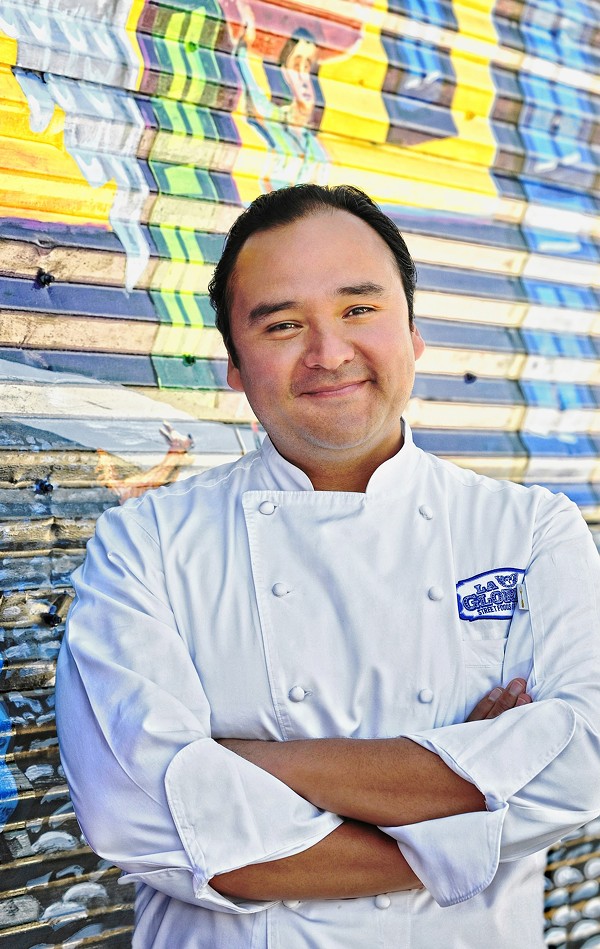 Courtesy of Johnny Hernandez
Johnson and the San Antonio Food Bank have partnered to plant native crops at Mission San Juan using an acequia, the type of irrigation watercourse once used in by the area’s Spanish colonists. Eventually, that plot will supply the produce for the restaurant.

“For me, the word ‘acequia’ really represents the veins of agriculture in the New World,” Johnson said. “[This is] colonial farmland that has been continuously been farmed for 300 years and fed by the original acequia. Still, to this day, it feeds from the Mission San Juan… [This was] like the original farm-to-table way of life.”

Similarly, McHugh plans to connect his restaurant to San Antonio’s past, tracing the history of Texas barbecue back to its German roots.

“We’re excited to explore how it has grown from the Germans’ love of smoked meats into the familiar barbecue we know and love today,” he said. “And we’re looking forward to bringing brewing to La Villita.”

Though the face of La Villita is evolving, some things will never change.

“Tacos will still definitely be part of [what we do here],” Hernandez added.
Taco Fest will take place April 13, from noon to 11 p.m. To purchase tickets online, visit tacomusicfest.com.