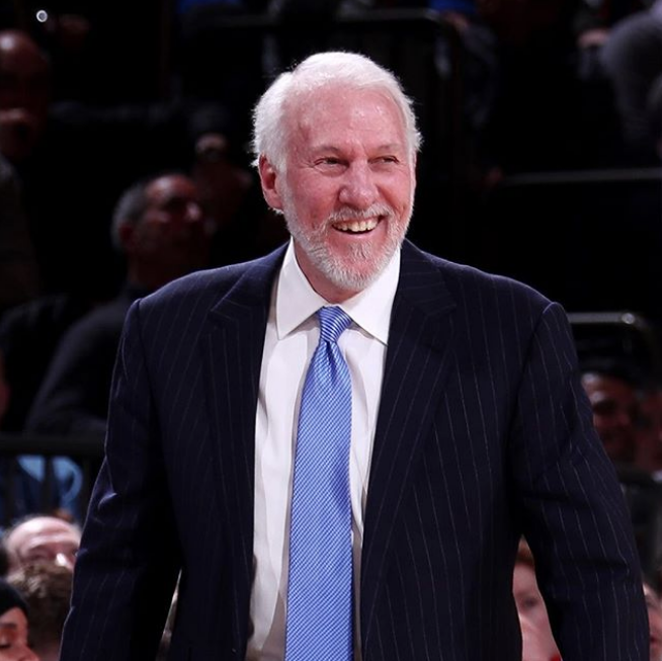 Instagram / spurs
Now that the San Antonio Spurs have been eliminated from the playoffs, all eyes are on Gregg Popovich to see if the longtime coach will return for another run.

During his end-of-season press conference on Monday, Popovich did not make an official announcement about his future with the Spurs — a team he's coached for the last 22 seasons. Instead, Coach Pop teased that he's in contract negotiations with the franchise.

"That's up in the air. I've never talked about my contract in all these years," Popovich told reporters. "My contract is basically my business."

True to his reputation, he joked about other teams pursuing him.

"I'm currently in negotiation, could very well end up with the Portofino Flyers or the Positano Pirates," he said.

Aside from his own future with the team, Popovich did give a few hints about next season's roster. While he didn't talk of cutting any current Spurs, he had high praise for select players. Popovich described Rudy Gay as "somebody that we hope we can figure out a way to keep him here." He also sees potential in Derrick White, Bryn Forbes and Lonnie Walker IV, while also hoping that Dejounte Murray can return in the fall following his season-ending injury.

As he bid farewell to reporters, Popovich subtly admitted he'll be back for the 2019-2020 season.

"Good luck to all of you this summer," he said. "Be safe. We live in a dangerous country because nobody has any courage to do what they need to do. So, enjoy and we’ll laugh a lot next fall."