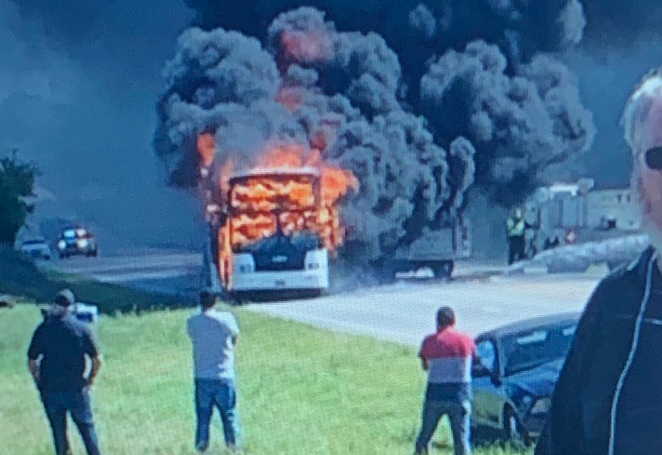 Twitter / ricklgodwin
A charter bus being used by a local church burst into flames while driving back to San Antonio Thursday afternoon.

According to multiple reports, the bus was traveling down U.S. 281 near Ranch Road 1323 in Blanco County it ignited and became engulfed in flames.

A tweet from pastor Rick Godwin said the vehicle was carrying children who attend Summit Christian Center. A chaperone told KSAT that about 40 children were on the bus at the time of the incident. The bus was just one of four returning to San Antonio after attending a four-day church camp. Godwin's tweet also verified that all of the passengers were able to get off the bus safely.

Six children were reportedly treated were smoke inhalation, and another two were checked out for shock. None suffered injuries requiring hospitalization.


One of our 3 chartered buses bringing kids back from camp caught fire. All children exited safely but bus total loss. Thank God for His protection!🙏 pic.twitter.com/om16dc0UGf

The bus, however, is considered a total loss. Authorities have not released any information as to what caused the fire but said they are investigating the cause.