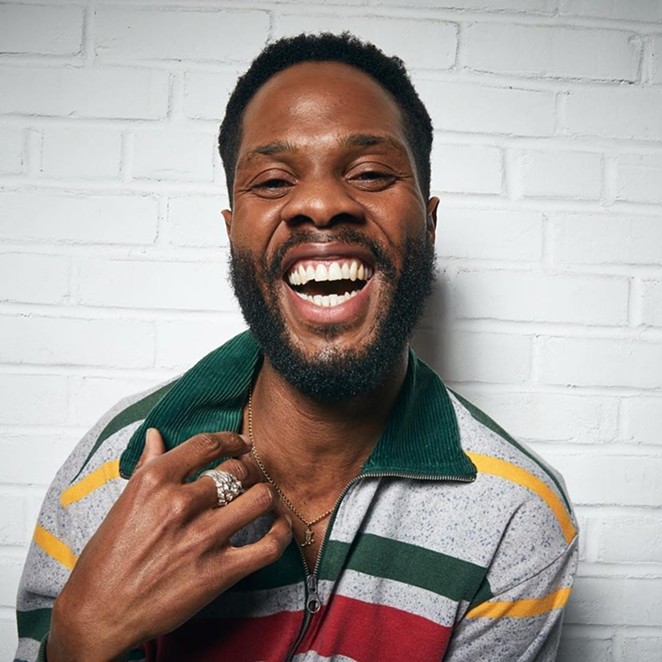 Lifting his MC handle from Springfield’s most notorious mob boss, Fat Tony raps like the archetypical Simpsons fan, equal parts smart and smartass, dropping litanies of cultural and literary references even as he makes you laugh and shake your bon-bon.

Thanks in part to a feature on A$AP Rocky’s breakout mixtape in 2011, Fat Tony has spent the past decade making music on the East, West, and Gulf Coasts, along with a six-month stint in 2016 running an international rap series in Mexico City.

Settled for now in the Brooklyn neighborhood of Crown Heights, he’s returning to the Lone Star State to perform at the Aztec Theater’s 808 Day show in San Antonio. The bill — which takes place Thursday with Camp Lo, Boombaptist and K Dot LA — celebrates the Roland 808, the drum machine that put the boom in boom-bap.

That machine is the bedrock of rap production, and thanks to a regular set of producers — including GLDN_EYE/Tom Cruz, Hevin the Dude, and Taydex — it’s a sound dear to Fat Tony’s heart.

"It’s known for a really distinct, bass-heavy kick drum, you know what I mean?” the rapper told the Current. “Very, very dope. I’m sure I’ve abused that sound in my music before.”

Indeed, a survey of Fat Tony’s catalogue goes heavy on the 808. From 2010’s RABDARGAB (and doubly so for SCREWDARGAB, which got the signature Houston chopped-and-screwed treatment from OG Ron C) to last year’s 10,000 Hours, it’s been one of the few constants in a delightfully diverse catalogue.

Fat Tony has also promised to tease several cuts from his forthcoming album Wake Up, which he describes as half experimental beats, half uptempo bangers and 100% sure to stress-test the Aztec’s foundation.

“I’m excited to be loud,” he laughed. “When it comes to rap music, it’s about it being felt.”
Get our top picks for the best events in San Antonio every Thursday morning. Sign up for our Events Newsletter.
© 2022 San Antonio Current