Seven Democrats Are Now Vying to Take Down Sen. John Cornyn of Texas. Here's Why. 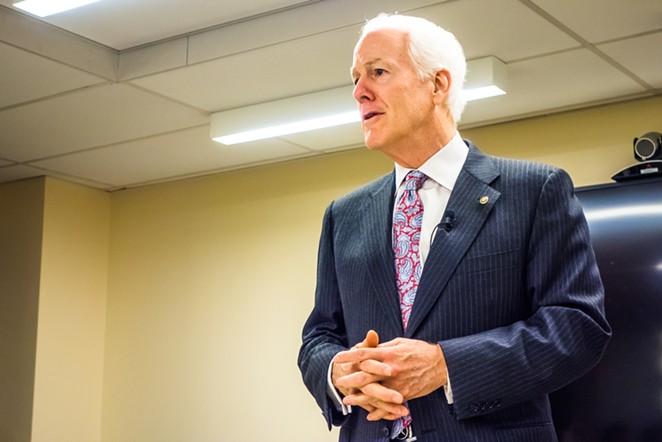 That's a lot of enthusiasm for facing off against a lawmaker who scored a 27-point victory over his last opponent — and in a place where a Dem hasn't won a statewide office since 1994.

"People smell the purple blood in the water," explains David Crockett, a Trinity University political science professor. "To the extent that there are serious candidates in the bunch, they've read 2018 as evidence that Democrats can win statewide races in Texas."

Crockett points to the narrow margins by which Sen. Ted Cruz and Lt. Gov. Dan Patrick, both Republicans, held onto their seats last cycle. Cruz eked out his victory over Democratic rockstar Beto O'Rourke by fewer than three points, while Patrick only scored a four-point win over underfunded underdog Mike Collier.

Democrats are wagering Cornyn will be weighed down by his close association with President Donald Trump. They also know millions of new voters have relocated to the state in recent years, repainting reliably red big-city suburbs a shade of blue.

Even so, Democratic candidates are pulling in cash of their own, and the party has made Texas a 2020 priority.

Hegar, who ran a close House race in the Austin suburbs last year, took in over $1 million in the second quarter after launching her bid in late April. And Tzintzún Ramirez's campaign said it raised $200,000 in the 24 hours after announcing her run.

Not to mention, Patrick's razor-thin 2018 victory shows that money doesn't always ensure a clear path to victory — especially when voters sour on an incumbent.