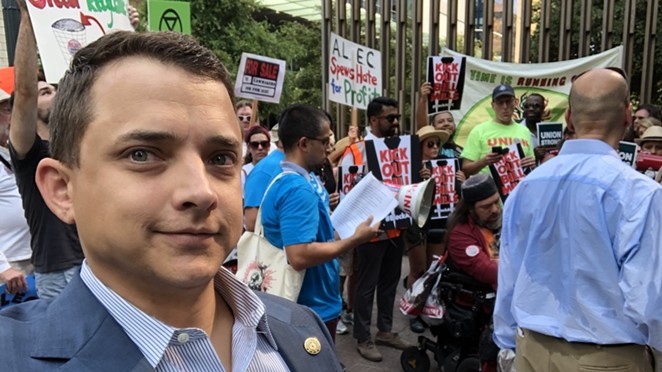 Twitter / @BriscoeCain
Briscoe Cain gets all troll-y with protestors outside the conservative American Legislative Exchange Council meeting in Austin.
Texas State Rep. Briscoe Cain III made headlines following Thursday's Democratic debate by tweeting to presidential candidate Beto O'Rourke that his AR-15 "is ready for you."

The GOP lawmaker's message — in response to O'Rourke's call for banning assault weapons — was widely considered a violent threat. Twitter removed the tweet, saying it broke the service's rules on threats and violence. O'Rourke himself responded: "This is a death threat, Representative. Clearly, you shouldn't own an AR-15 — and neither should anyone else."

But that tweet from Cain, who represents a district east of Houston, was only his latest attempt to whip up online outrage.

Aside from predictable posts slamming the mainstream media and sphincter-snorkeling Donald Trump, the diminutive state rep apparently spends a lot of time trying to gin up controversy on Twitter. Perhaps in effort to divert attention away from his less-than-enviable record.

After all, during his first year in the Lege, he was named one of "The Worst Legislators of 2017" by Texas Monthly. "We tried really hard to give Briscoe Cain a pass," the magazine wrote. "But he left us little choice. When we asked Capitol insiders for Worst list suggestions, his name, almost universally, was the first one mentioned."

In case anyone needs further evidence of Cain's online shit-stirring, we didn't have to scroll back far. On September 11, he announced that the Legislature should "abolish the City of Austin" because he disagrees with its decision to provide public funding for abortion access.

It’s past time that the #txlege abolish the City of Austin and make it a capital district like that of D.C. (residents retain state lege districts; Lege gets supreme authority over mayor and council) https://t.co/aGfcvfXqZJ


In August, Cain urged President Trump to alter the course of Hurricane Dorian with weapons of mass destruction. "Just Nuke It!" he tweeted without apparent irony.


Earlier this summer, after Democratic State Rep. Donna Howard posted about families relying on food pantries, Cain suggested that the best way to deal with the 6,000 state employees on food stamps was to fire them.

We could also reduce the size of state government which would reduce the number of state employees on food stamps. Easy fix. #txlege https://t.co/dmvVTNU64z


And then there's this assault on the English language, which we can only guess is Cain's attempt to emulate Trump's covfefe-ing skills:


Given the history of Cain's online outbursts, it wasn't surprising to see the rhetorical skill he invoked to defend his recent statement about O'Rourke.

"Did you, uh, just threaten to shoot a former member of Congress and current candidate for president?" one Twitter user asked.

Cain's thoughtful response: "You're an idiot."