A Star is Mourned: Oscar Winner Renée Zellweger Carries All the Emotional Baggage on Her Own in Judy

If there’s something specific director Rupert Goold (True Story) and screenwriter Tom Edge (TV’s Lovesick) want audiences to understand about actress and screen icon Judy Garland (A Star is Born) in their new biopic Judy, it’s that there was a tremendous amount of pain behind those big, beautiful brown eyes. It’s a suffering Garland would live with her entire life and until her untimely death in 1969 at the age of 47 from an accidental drug overdose.

In Judy, Goold and Edge revisit the last months of Garland’s life, when she travels to London for a series of sold-out concerts at a Westminster nightclub. Depicting their subject as someone on a steady spiral downward, Goold and Edge have no qualms about presenting Judy as a full-scale downer. Luckily for them, Oscar-winner Renée Zellweger (Cold Mountain) is more than up for the task, despite having to do all of the emotional heavy lifting for most of the picture.

Although the film covers her last chapter, there are flashbacks to her time as a teenager on the set of the 1939 classic The Wizard of Oz. Judy opens with a young Garland (Darci Shaw) listening to an MGM studio executive talk about the opportunity she has if she’s cast in the lead role. He simultaneously plays mental games with her by mentioning that Shirley Temple is also auditioning for the part. “Everybody loves Shirley,” he tells the already anxious Garland.

These flashbacks occur a few times throughout the film. While not as revealing as they could have been, they set a troubling precedent for Garland’s career. Every aspect of her existence is controlled by the studios — from the food she eats to the number of hours she spends working. Zellweger’s Garland finds herself in the same position as many actors today when they hit a certain age — no longer in demand in an industry that quickly moves on to the next starlet in line. Technically homeless during this segment of her career, Garland’s only real option is to leave her children behind with her ex-husband and set off to make some money across the pond. 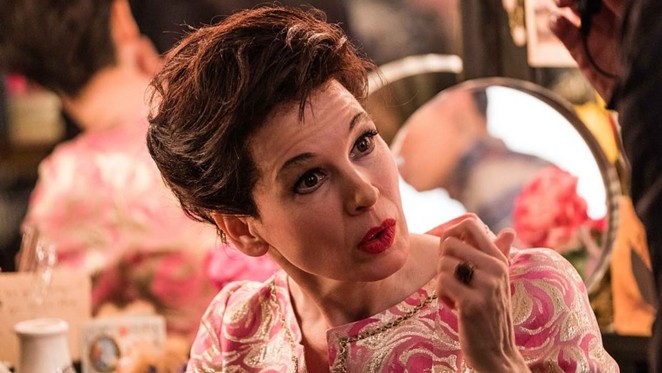 Adapted from the 2005 stage play End of the Rainbow by West End and Broadway playwright Peter Quilter, Judy is a heartbreaking tale of a unique talent whose tragic downfall is only one detail of her story. Zellweger feeds off that sadness with a fearless performance — one of vulnerability, veiled disappointment and what seems to be delirium due to a lack of sleep and an excess of pills and alcohol.

There’s no doubt Garland’s life was a train wreck in its latter years, but if given the choice, most fans probably would have liked a more comprehensive representation of her as a wife, mother and entertainer. Still, with the material Goold and Edge lay at Zellweger’s feet, it’s hard to deny the heart and humanity that shines through.