By Acacia Coronado, The Texas Tribune 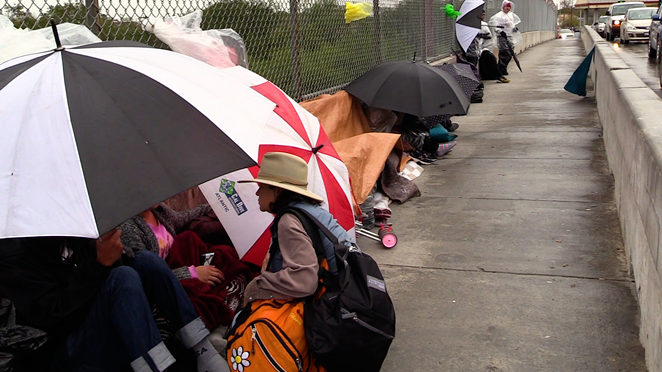 Rebecca Centeno
Central American refugees line up in Matamoros to wait for a chance to plead for asylum as an aid volunteer checks on their safety.
MATAMOROS, Mexico — The makeshift shelters are clustered just past the river’s edge, a rainbow of tarp colors, woven with trash bags and held together with sticks, stones and metal rods that have become home to an estimated 2,000 migrants from Honduras to El Salvador, Nicaragua to Mexico.

Some have lived here for months; all of them are waiting for decisions on asylum claims that may never succeed.

This refugee camp yards from the Texas border has been here since summer 2018, but it has grown exponentially since July — the result of Trump administration policies aimed at forcing migrants to wait south of the river before and after requesting asylum. Mexico’s president, Andrés Manuel López Obrador, agreed to these policies after Trump threatened tariffs, but the Mexican government isn’t providing much help to the migrants camped on its northern border.

Yasmara said she and her young son arrived from El Salvador a month ago, fleeing threats their family received from local criminals. She said they arrived upriver at Reynosa, where they asked for asylum and were initially taken into custody while their case was processed. They were then taken to the Gateway International Bridge between Brownsville and Matamoros to await their asylum hearings in Mexico.

She lines up in the hot sun at 11 a.m. in hopes of getting one of the few plates of food provided by Mexican immigration officials at 1 p.m., then gets in line again by 2 p.m. for the 4 p.m. serving — she said typically only 40 or 50 people get food before it runs out. The migrants mostly rely on a dedicated group of religious organizations, immigration activists and individual donors who regularly arrive with food, water, blankets and other basic necessities.

“Someone asked me recently why we wanted to go to the United States after everything we have been through, and I said, ‘Because I know not all Americans are the same, they are American and they are not like this,’” Yasmara said, explaining that while she was in U.S. custody, officials kicked her cot to wake her and her child. (The Texas Tribune is not using migrants’ last names because of the risk of retaliation by Mexican and U.S. authorities.) 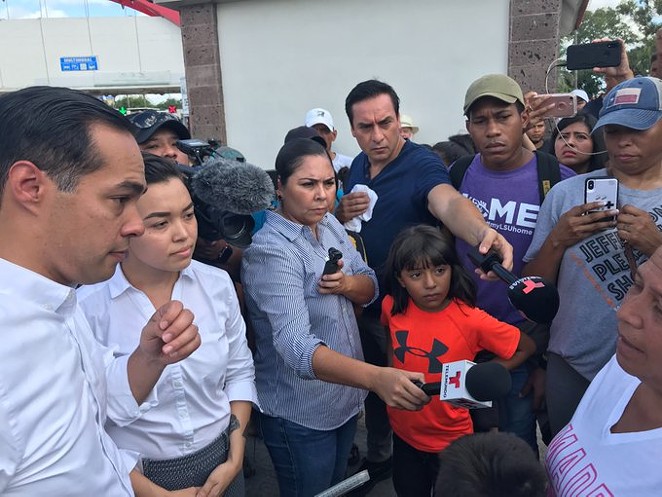 Migrants have been piling into the camp at a rate of several dozen a day. With only two wooden shower stalls in the woods, less than 10 portable toilets and no cleaning supplies, the conditions are quickly deteriorating. Lack of running water and limited access to food have led the migrants to the river to bathe, fish and draw water; they use a wooded area nearby as a makeshift bathroom. When it rains, the migrants and all their belongings are quickly soaked.

Mexican news outlet El Bravo reported last week that city and federal officials may relocate the migrants as early as Monday to a stadium an estimated hour and 45-minute walk from the Gateway bridge. Matamoros city officials did not respond to requests for comment.

Huddled with her baby in a sliver of shade on the sidewalk next to a Mexican immigration office with a dozen other women and children, Iris said she's been here since July, when she arrived from Honduras with nothing. She said she surrendered to Border Patrol at the bridge and was told by U.S. officials to wait in Matamoros, where they assured her there would be a shelter for her and her child. Now she begs passersby for a tent and waits for her second asylum interview, which is scheduled for December.

A Mexican immigration official approached and told her and the other mothers and children to move away from the building because it's being renovated. The official said when he picks up the migrants who have been sent back from the United States to Mexico, they are often under the wrong impression there will be a shelter waiting for them.

“The U.S. is the one who is lying to them,” said the official, who declined to give his name. “I tell them the shelter doesn’t exist. The U.S. should be the one giving them aid — that’s who they are asking for asylum.”

As bad as things are along the riverbank, the migrants said things were worse when they were in U.S. custody after they requested asylum. They described being separated from their children, berated and insulted by U.S. immigration officials, and subjected to unsanitary living conditions while in detention.

Two women who arrived separately at the border this summer — one from El Salvador and one from Honduras — both said they surrendered to U.S. Border Patrol agents after crossing the river in Reynosa. The women said U.S. officials forced them to apologize for entering the country illegally and separated them from their children, both under age 10, for roughly a week before they were reunited.

“When we were separated, we knew nothing about our children, if they were OK or eating or cold,” the woman from El Salvador said.

She said immigration officials gave DNA tests to her and her child, telling her they did not believe the child was related to her. Several other migrant mothers at the camp said they had been subjected to DNA tests along with their children.

Twitter / @ClaraB_KGBT
A child waits in a sleeping shelter at the Matamoros border camp.

The Honduran mother said they were given cots to sleep on but were woken by speakers pressed against their ears blaring loud noises. She said when the children threw up in the cells, officials forced them to endure the vomit for three days without cleaning it or giving the mothers anything to clean the cell themselves. Both mothers said women in their cells became covered in human waste while caring for their sick children and were forced to wear their soiled clothing for days.

Today, both wait at the Matamoros camp for their next immigration court dates. The mother from El Salvador said her appointment is scheduled for July.

U.S. Immigration and Customs Enforcement said it could not comment on the women’s allegations without their full names.

“ICE cannot research or provide individual comment on any allegations of medical mistreatment without the specific details, including the names and signed privacy-waiver forms of the current or former detainees who have made these allegations,” the agency said in a statement.

“As a matter of policy, U.S. Immigration and Customs Enforcement does not comment on pending litigation,” the agency said. “However, lack of comment should not be construed as agreement with or stipulation to any of the allegations. As part of the Department of Homeland Security’s homeland security mission, our trained law enforcement professionals adhere to the Department’s mission and values, and uphold our laws while continuing to provide the nation with safety and security.”

In the camp, the migrants are finding ways to survive a wait that can stretch for months before they receive a hearing before an immigration judge. Under the international bridge, three migrants stood watch over a cooking fire. A few feet away, a dirt path and the wafting scent of sewage led to the river, where half a dozen children bathed and cooled off from the blazing heat.

Rogel, an asylum seeker who said he arrived at the camp two months ago with his son, stood at the water’s edge, a makeshift fishing rod in his hand. He said he just got off work at a nearby construction site and was catching their dinner. His son, no older than 5, stood next to him, helping him clean the day’s catch.

A short distance away, beyond a low pink stucco wall, the migrants had turned a stand of trees into the camp’s outdoor toilet. Feminine hygiene products littered the ground. Rosamaria from Oaxaca, Mexico, sat on the dirt path rocking her 1-month-old daughter. She said she delivered the baby along the journey in Saltillo and arrived at the camp three days earlier.

Around 3 p.m., as the thermometer reached 100 degrees, a group of pastors visiting from Chicago gathered in a circle near the bridge’s entrance and began to pray and sing. A crowd of migrants slowly gathered around. Before long, there were hundreds of voices joining in, some in broken English.

From atop a nearby hill, someone screamed. A man had fainted and tumbled down the hill before rolling to a stop near a chain-link fence that surrounds the camp. Other migrant sprinkled water on his face and fanned him. Women screamed for an ambulance, and Mexican immigration officers eventually realized something was wrong and called for help.

One of the Chicago pastors turned to the crowd. “Let us pray for the man who has fainted and all of those who have fallen or are living in these circumstances.”

Then, a group of Mexican immigration officials arrived at a gate in the chain-link fence, delivering 30 or 40 new arrivals who filed into the camp.
© 2022 San Antonio Current