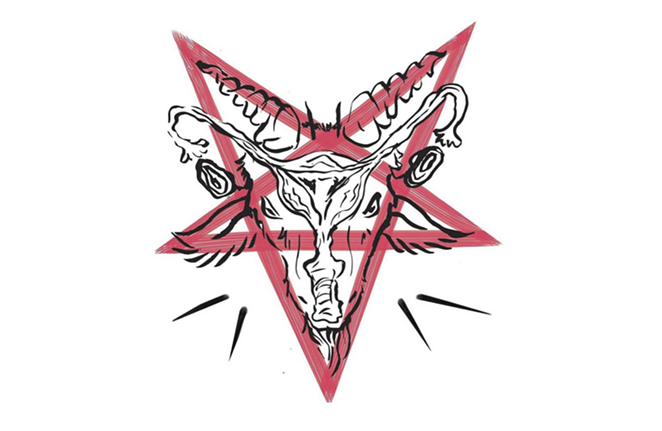 Tina Scott, Courtesy of the Satanic Temple San Antonio
Well before Salvation Army bellringers with red buckets make their annual appearance, another crimson-colored crusade for charity has launched in the Alamo City.

This week, San Antonio's chapter of The Satanic Temple — a nontheistic organization that uses Satanic imagery to promote social justice and the separation of church and state — launched a donation campaign christened Menstruatin' With Satan.

Through December 3, The Satanic Temple San Antonio (TSTSA) is accepting donations of new and unused menstrual products, including pads, tampons and menstrual cups. The only requirement is that all donations remain sealed in their original packaging.

While charitable gifts of clothing, food and other toiletries rise around the holidays, donors frequently overlook menstruation products. That's unfortunate, because beyond their medical necessity, menstrual products are still not exempt from sales tax in Texas — even though other medical supplies such as sunscreen and bandages are. That increases the financial burden of buying pads and tampons for people on limited incomes.

The Satanic Temple San Antonio is pleased to announce that our first ever Menstruatin’ With Satan has kicked off here in Satanonio. Donate via Amazon : https://t.co/FDhMR2on0n pic.twitter.com/SHtLINMnMt


TSTSA is soliciting local businesses to host donation boxes, including the option of providing them sans imagery for anyone wary of the Baphomet/pentagram/uterus logo. For now, prospective donors can purchase directly from an Amazon wishlist or bring donations to the chapter's Ale Satan public meeting on November 17.

At the end of the drive, the products will be donated to local shelters and other organizations in need. TSTSA didn't name any of the likely recipients, but that's probably to shield the groups from any backlash over accepting good work done in association with Lucifer.