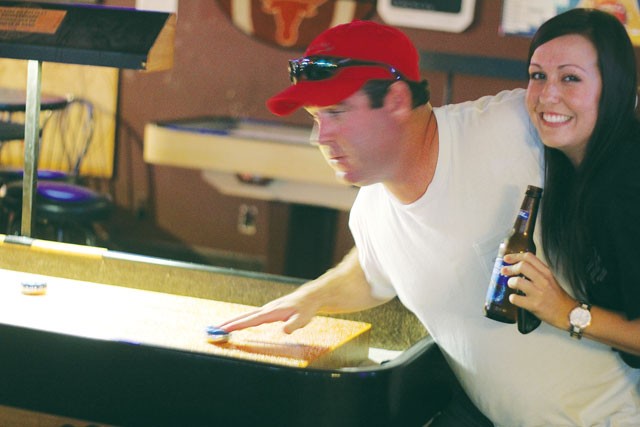 As of last Friday, the question on every alcohol enthusiast’s mind is: How will the new smoking ban affect my favorite bar/pub/club? To properly gain insight into this conundrum, we needed to start our experiments at a bar we were already intimately familiar with. Sir Winston’s Pub is a long-time, regular hangout for many in the Scientist crew, and also one of the smokiest bars we made a habit of visiting — in other words, the perfect control group.

Upon entering Winston’s, nothing seemed different at first. The pub still has a spacious, rectangular wooden bar, frosted-to-perfection beer goblets, three pool tables, (at least) seven flat-screens, two shuffleboard tables, three(!) women’s restrooms, and — probably best of all — a free popcorn machine near the jukebox. However, soon we noticed the new, fresher atmosphere was at odds with the 20-plus years of smoke damage to the ceiling (the once-white tiles have turned a sad-looking tan) and couches (mutated from white to a ruddy, tobacco-stained color). But once the beer pitchers arrived, the tar damage faded into the background as elements of extra “character.” By 11:45, ’90s Bobby Brown was on the jukebox and a few raucous shuffleboard games had broken out. Same old Winston’s.

After a pitcher or two, Dr. Maddin arrived with some mystery shots that our young bartender described as a “screwdriver with Sprite” (Maddin dubbed it an “Albino Albatross”), which tasted more like Emergen-C. Stomachs fizzing uncontrollably, we stuck with beer for the rest of the night. Dr. Thomas was the only smoking scientist that night, periodically darting out for a puff. While Winston’s has a brand-new, wood patio (more like a large, partially covered gazebo, really), he felt the high wooden fences offered a kind of cage for smokers. “I’d rather smoke out front,” he said. “That was just depressing.” While some grumbling could be overheard on the patio, you have to appreciate Winston’s efforts to accommodate patrons who light up. Other bars in the area don’t have the luxury of a back patio to smoke and drink simultaneously. Once the weather cools off — and people get used to the ban — I suspect the patio will become more of a destination.

“Last week, this week, and next week will be our slowest weeks all year,” said George Todt, owner of Sir Wintston’s Pub. “But it’s not because of the smoking ban — it’s because kids are back in school, and parents just bought school supplies, school clothes, uniforms, shoes ... It’s hard to say how the smoking ban affects us right now.” But Todt seemed optimistic, and with good reason — the appeal of Winston’s is its neighborhood-bar status and lived-in feel, and that just can’t be regulated. •

Vibe Like your dad’s old basement game room, but with more TVs (and now with less smoke).

Best Use Sir Winston’s fares well in a post-tobacco bar scene with a brand-new patio and continued excellence as an unpretentious neighborhood nightspot.