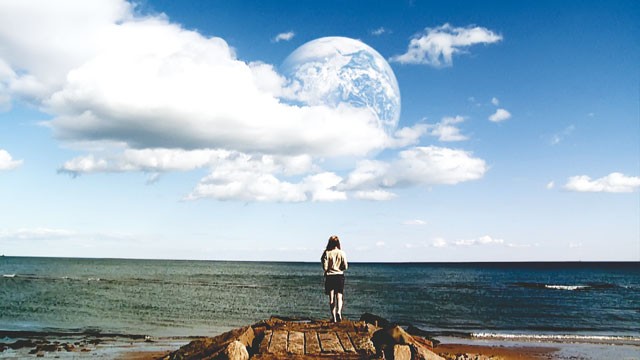 Rhoda Williams was never enthralled with outer space. Never, until she saw Jupiter’s clouds in motion, swirling, like just-poured cream in a cup of coffee. “I felt like anything was possible,” she says in voiceover, “and it was.”

The night Earth 2 appeared in the sky, somewhere between our earth and the moon, 17-year-old Rhoda (Brit Marling) was driving home from a very — how shall I say? — non-provincial party. She had been accepted into MIT’s astrophysics program, but, transfixed on the celestial orb, wavy tresses waving, limbs languid (the lush), she was no more than a stricken, wide-eyed child. And that’s when she struck another vehicle — populated by a beautiful nuclear family, viewed courtesy of a crane shot through their automobile’s moonroof.

After four years in the slammer, Rhoda is released, Earth 2 still in sight and still an enigma. Every generation has their “I remember where I was when ... ” event (Kennedy assassination, 9/11); for Rhoda’s generation, that event is the emergence of Earth 2, and she remembers where she was: killing all but one member of a family. Guilty, gorgeous, and strong-featured, Rhoda takes a job as a school janitor, where her work jumpsuit is about as obscuring as a space suit.

Eventually, her curiosity gets the better of her and she approaches the home of the one survivor of the crash — the father. (Because she was a minor at the time of the accident, her identity was never released.) He’s once-successful composer John Burroughs, played by William Mapother, who some will remember best as Tom Cruise’s cousin playing that creep on LOST. Posing as a maid, she infiltrates his pathetic life (when they first meet his shirt is stained with alcohol-induced vomit), and her feeble attempt at atonement becomes a friendship.

Earth 1 attempts to contact Earth 2, and the inhabitants of our planet’s twin turn out to be just what I have implied in using the word “twin.” But therein lies the interest of the film. It’s full of sci-fi atmosphere, eeriness, and philosophical questions instead of aliens and explosions. If an alternate earth exists — rather than the more popular full-on alternate universe — are our others condemned to our same fate? Do they suffer the consequences of our actions here? A Richard Branson type organizes a voyage to Earth’s duplicate and the passengers may well find out.