'V/H/S', the scariest film only a few have seen 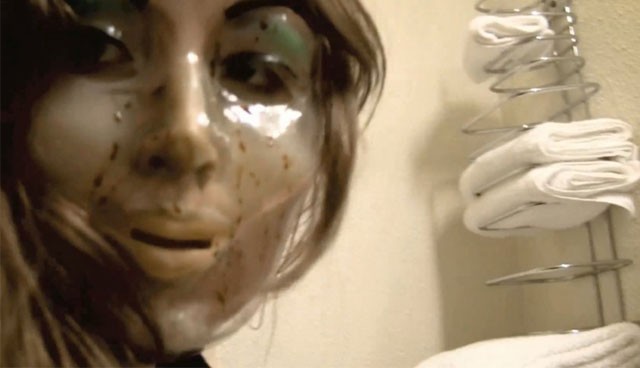 V/H/S opened on October 5 in only 18 theaters nationwide, earning a pale $36,402 so far. The movie will finally arrive to San Antonio on Friday, Oct. 26, but hurry and don’t blink: It will only enjoy a one-week run at the Bijou (but you can also rent it on iTunes or Amazon for $6.99).

The movie is the latest in a long list of films in the “found-footage” genre, complete with shaky hand-held cameras, sexy girls, and moronic men, but the comparisons end there — V/H/S is unpredictable, disturbing (in an irresistible way), and bloody as hell.

In a nutshell: four vandals (part of an opening story named “Tape 56”) are hired by a man to retrieve some mysterious VHS from a house. “You’ll know it when you see it,” is the only direction they get, but once they get there they realize the house if full of tapes. The tape each man watches becomes a chapter of V/H/S, and the results vary. But even at its weakest, V/H/S delivers the goods.

“Amateur Night” (dir. David Bruckner) is the best of the bunch, but your sex life will never be the same after watching it.

“Second Honeymoon” (dir. Ti West) explains why, if you’re on a Southwest road trip with your better half, you just don’t open the door when someone knocks at night.

“Tuesday the 17th” (dir. Glenn McQuaid) is pure slasher stuff that makes Friday the 13th look like Waiting to Exhale.

"The Sick Thing That Happened to Emily When She Was Younger" (dir. Joe Swanberg and Simon Barrett), the only one filmed with a stationary camera, is the reason your next Skype session will feel weird.

"10/31/98" (dir. And starred by Radio Silence, an LA comedy collective) ends the film on a big, scary, special-effects-laden note.

Not for all tastes, but if you have a strong stomach and an open mind, you’ll realize this movie's cleverness is as far more interesting than its torrents of blood.

Available for rent on iTunes and Amazon.com. $6.99