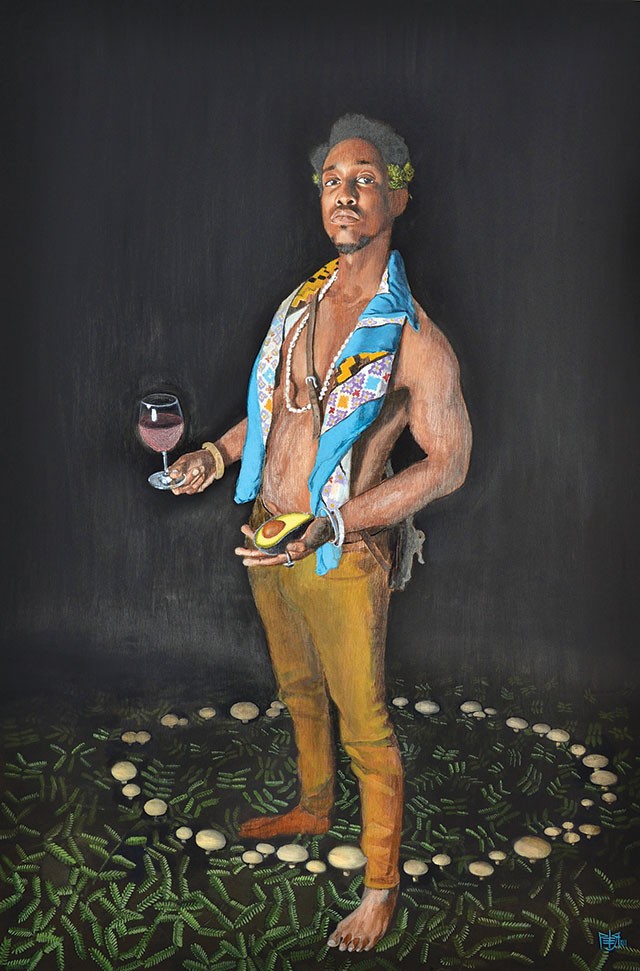 Sculpture and three-dimensional work stand out in the Southwest School of Art’s “All School Exhibition 2013,” perhaps the biggest and best local group show of the year. Faculty, studio artists and students are invited to participate in the juried exhibition, spanning a broad range of styles and media, though each artist shows only one or two works. Providing a more in-depth look is the adjoining “Certificate Student Exhibition” for artists who have completed the school’s program of professional study.

Working with powder-coated aluminum, adjunct faculty member Sarah T. Roberts modeled a sinuous female torso and head that emerges from the wall, defined by twisting strands of black metal that allow you to see the body inside and out. Roberts says she is responding to the early death of her mother, a childhood trauma that compelled her to research female anatomy and the process of grieving, which inform the startlingly intimate Her Body Is My Body.

Gripping as Roberts’ work is, with so many works clamoring for attention, humor helps. After taking a class on Japanese tomb guardians, Mary Lea Trousdale wondered what kind of band she would like to hear playing forever. Masked and dressed in harlequinesque costumes decorated with skull patterns, her child-size, ceramic musicians play rattles, a guitar and bongos in the whimsical The Tomb Guardian Trio.

Gary Schott, who heads the jewelry/metals department, takes a healthy, conceptual approach in his amusing yet informative metal desserts with calorie counts. Displayed on white porcelain cake plates, the miniature medallion-like sweets include a Moon Pie, 110 Calories; an Apple Pie, 380 Calories; and a Pancake, 140 Calories. Good to keep in mind the next time you need a sugar fix.

A Victorian-looking, perceptual puzzle that even Dadaists could love, Carol Dotin’s You Decide matches a mother with hooves with a young daughter with wings. The reluctant mother, who might have waddled out of a child’s nursery rhyme, is being dragged along on square wheels with a chain through her nose by the starry-eyed child. Taking the prize for best ceramic work is Jennifer Ling Datchuk’s Listen, a pair of slip cast porcelain “ears” made from what looks like drains and human hair.

Vincent Valdez heads the painting and drawing department, so it’s no surprise his portrait of a boxer with battered, reddened eyes, V-Day, is a knockout. Adjunct faculty member Miguel Cortinas contributed the moody, haunting Prisoner of Leon Valley, a sad woman in shadows with metal jail bars and a background formed by sewing patterns. Named the best in painting and drawing is Peter Sharp’s full-length Medicine Man holding half an avocado and a glass of wine.

Claudia Langford added three-dimensional cut-outs of plants to the foreground in Blanco Lavender Field for a best in printmaking. A tiger stalks through an open field with floating red, orange and white balls in Elissa Vura’s The Smoking Man, best in the paper book category. In photography, Bryan De La Garza took the top prize for his shot of partying Gay Cowboys. The best in metals went to Lorena Angulo’s Soulful Folk Bird made with sterling and steel wire.

Each of the five artists in the “Certificate” show display five or six works. Technically, the most impressive are Kit Fontaine’s porcelain pieces reminiscent of seashells and fossils. While porcelain is prized for its smooth, expensive look, Fontaine uses it in ragged, unexpected ways, such as having small pieces that appear to have chipped off and creating rough textures reminiscent of ancient limestone.

Weaver Beth McMahon also gives a conceptual edge to a traditional art form. Five beautifully dyed sheets of cloth are draped for a waterfall effect in Cliff. A miniature weaving in a box echoes a larger weaving coming off the wall in Translation. A small, gleaming bit of blue adds mystery to the rich gold accents of the hand-dyed weaving Secret, which involved degummed silk and shibori and quilting techniques.

Using male and female dancers as symbols of the interplay between the ego and id, Barbara Felix emphasizes the woman’s red dress in a series of passionate paintings that resemble movie stills. While the woman’s face is often contorted with strong emotion, the titles seem to refer to the struggle for self-control such as Seducirme (If I seduce me…) and Abrázame (…I will hold me).

Soothing images of clouds and water ripple through Sally Astelford’s watercolor monotypes, such as Red Sky at Night and La Jolla. Mark Rue concentrates on thorns and yellow flowers in his close-up views of cactus in paintings such as Cactus Pair and Turn Me Loose.