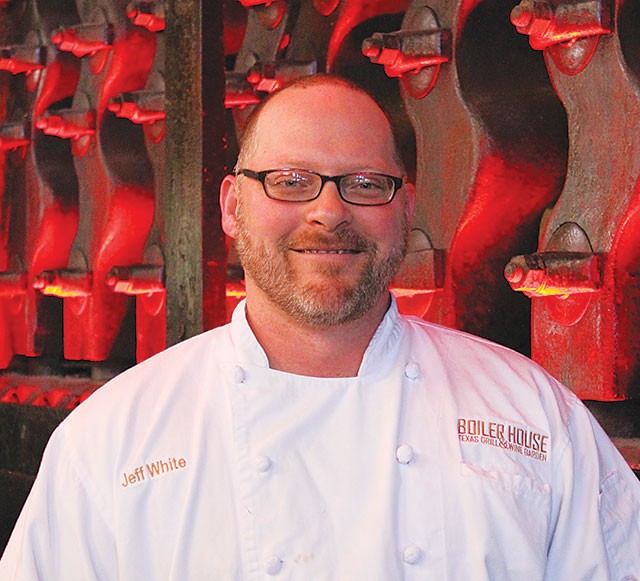 Jeff White started his first restaurant job at 16, but planned on a career in mechanical engineering. He lasted all of three months at his first gig in the construction field. “The owners got me off the hook by telling me, ‘do what you really want to do,’” said the San Antonio native. “I wasn’t paying attention — I was thinking about food.”

Now the new executive chef at Boiler House Texas Grill & Wine Garden, White held the position of executive sous chef under Chef James Moore. Moore left Boiler House in early March to plan TBA, a new small-plate and cocktails concept rumored to be opening soon on North St. Mary’s. White seemed a shoe-in to replace him at the Pearl’s largest restaurant, having worked for an extensive list of fine establishments from Biga on the Banks to L’Etoile to Austin’s Louis 106. More recently, he was executive chef at Grey Moss Inn for seven years before joining Johnny Hernandez at True Flavors Catering Company. White eventually realized he was happier in a restaurant, and jumped at the chance to be on the team that opened Boiler House.

White told the Current that there were rumblings to bring in a big name from out of town. Instead, management followed Moore’s recommendation, and moved White to the executive spot. “Born and raised in San Antonio has been a big selling point — local boy takes over, that kind of stuff,” White said last week when we met after the lunch rush. “It was a very easy transition,” said White. “The hardest part for me is staying off the line. I’ve been told that’s no longer my position, I need to be out talking to tables.”

But what happens when it’s Hell City? “Saturday nights? I jump right in the middle of the line,” White responded “…we just bang it out.”

White says that though his crew now delivers 500-600 covers on weekend nights, “The original business model was 25 percent food sales, 75 percent wine and beer,” White explained. “But now it’s completely the opposite — we do at least 60 percent food.” For an establishment of its size, Boiler House has a small kitchen, but White says it’s easier to clean than a huge back of the house, and besides, “The menu is built for speed. Plates go right out as soon as they’re ready.”

Pointing out that Boiler House is in effect two restaurants — one with approachably priced small plates, the other delivering expensive, pure protein entrees, White responded, “We recently added a skewer section, nothing over 12 bucks. We’re selling them like crazy.” And that elusive middle ground? White smiled, and said, “We’ll get there.”