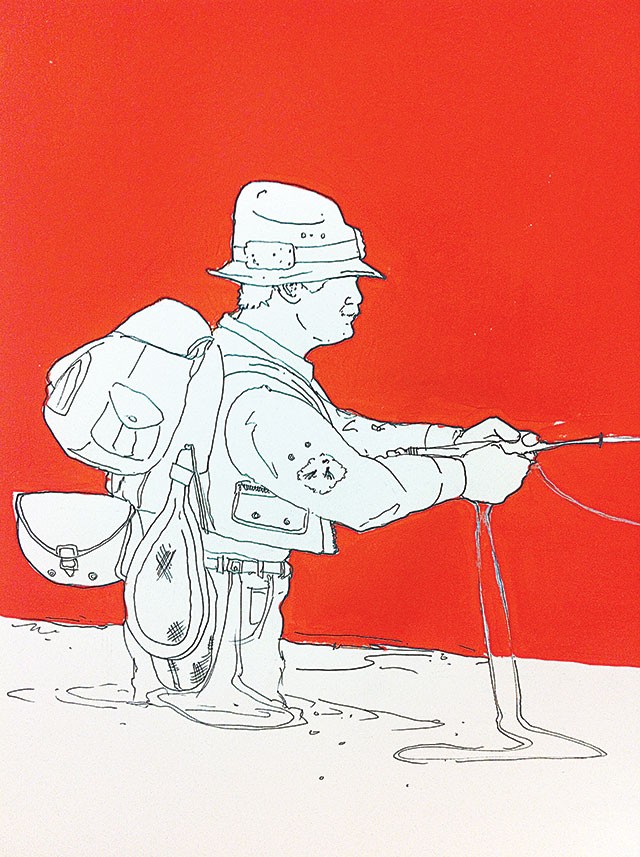 Rex Hausmann, local artist and arts advocate, recently opened his latest exhibition in the massive showrooms of Gallery Nord with a cohort of more than 30 participants, quite a crowd for a solo show. But Hausmann, who runs Alta Vista studio and exhibition space Hausmann Millworks with his family, and has toured groups of SA artists to Kansas and New York, loves a big social mix. His paintings have been exhibited at institutions such as UTSA’s Institute of Texan Cultures, Southwest School of Art, and at galleries in Los Angeles and New York, but collaboration has long been at the heart of his work.

The evening opened with a reading by SA poet Jim LaVilla-Havelein and continued with subtle programming. Models in cosplay costumes milled about, attended by stylists and followed by photographers Kat E.V. Day and Ernesto Ibañez. Dresses made of paper, by SA-based fashion designer Samantha Plasencia, held positions next to mock-ups of window displays filled with bits of ephemera and studio notes. A film and a slide show rolled, while a group of enthusiasts played the table-top game Warhammer. And that was just part of the ground-floor happenings, which also included an almost manic dispensing of donuts, treats that were seen in paintings done in his chaotically colorful signature style.

Two new series express Hausmann’s fascination with child’s play. Deep, canvas-like mono-colored squares are embellished on the edges with tiny clusters of plastic figurines. One large work depicting, says Hausmann, a trip to China, has the toy people stuck upside down on the bottom edge of a bare canvas, an allusion to the childhood story of people on the other side of the world walking upside-down.

On the second floor is a set of 15 line drawings — simple, but deftly executed. Like much of Hausmann’s output, there is an air of nostalgia; happy scenes of fishing trips are mixed with a drawing of a woman striding buoyantly into the day.

But why this outpouring of disparate work, much of it no longer on view at the gallery? Not just part of an ambitious opening party, Day’s photography and Plasencia’s architecturally constructed dresses are featured in Hausmann’s central project: a 95-page book, his sixth in a series. Part comic book, designer’s flip-book, and artist’s rendering for a film, it is a celebration of collaborative art making. The book, on sale for $40, costs a fraction of what the drawings and paintings, props for the pamphlet, go for. Hausmann is a hustler indeed, but though he plays the game of selling art for a living, he’s a San Anto boy, a populist through-and-through.