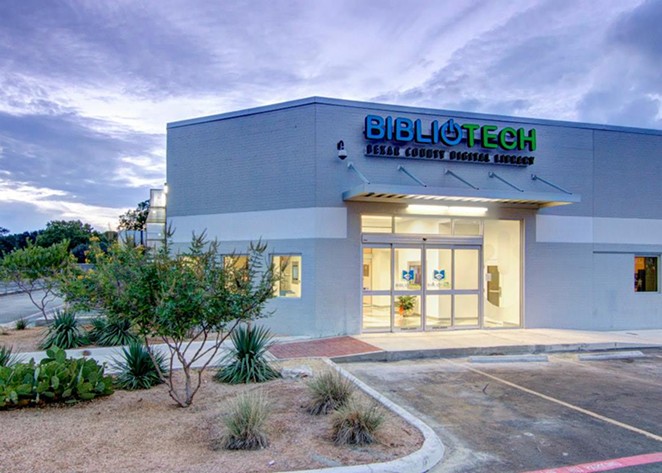 Facebook / Bexar BiblioTech
Bexar County has sought to improve internet access via its BiblioTech all-digital libraries.
One in four Alamo City residents lack Internet access, according to recent U.S. Census data. What's more, recent data from the Brookings Institution think tank shows the city is in the bottom quarter of the 100 largest U.S. metro areas when it comes to broadband access.

To remedy the situation, San Antonio and Bexar County officials launched a survey Monday to determine who in the city still lacks Internet access and basic digital literacy. From there, the city and county will develop potential strategies to narrow their digital divide.

While Census data gives a broad snapshot of the chasm, local officials say they're looking for more detail, including breakdowns for each of the 10 Council Districts. In addition to conducting the survey online, they're distributing physical copies at community centers, libraries and public events.

The survey, available in English and Spanish, will continue through February 2, 2020.

"Broadband internet is no longer a luxury. It’s a necessary utility," Mayor Ron Nirenberg said in a news release announcing the survey. "Access to broadband is essential for economic development, education and workforce attainment and growth. The City of San Antonio is dedicated to continuing to find collaborative strategies that will increase access to our communities."

In recent years, both the city and county have taken steps to narrow the digital gap. Bexar's BiblioTech all-digital libraries serve economically disadvantaged areas of the city, and the San Antonio Housing Authority introduced a federally backed initiative to improve digital access and literacy.

However, recent studies, including one that named San Antonio as one of the nation's "worst connected cities" show there's still a lot of ground to cover.