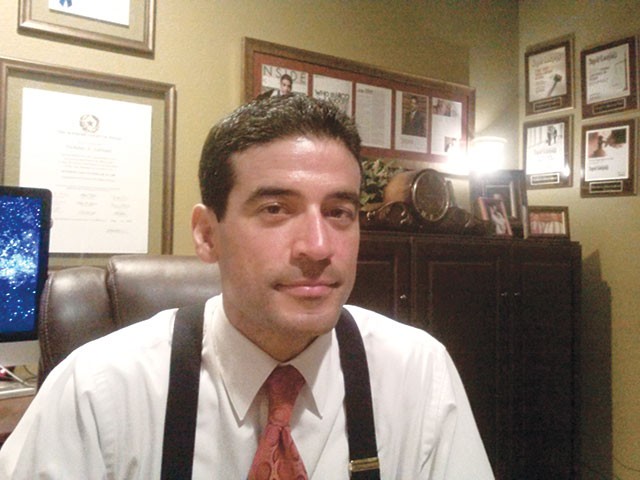 With a blind-folded statue of Lady Justice to his left, defense attorney Nico LaHood appears calm and cheerful dressed in a white business shirt, red tie and black suspenders, a look that’s become somewhat of his rock-star signature. The San Antonio native who ran for Bexar County District Attorney in 2010 against then three-term, seasoned vet Susan Reed, and lost by a 54 to 46 percent margin, must now face fellow defense attorney Therese Huntzinger in the Democratic primary in hopes of challenging Reed again in November. As we sit in the cozy law offices of LaHood and Del Cueto on North Main Avenue, it appears that LaHood’s Romney-like second shot has him strategically pumped up for yet another high-profile race.

LaHood, now 41, is certainly well-versed in the optics field, having seen the justice system as a prosecutor, a defense attorney, a magistrate judge and, in 1994, as a defendant himself following a drug bust for ecstasy (many may already know this tidbit by heart). Two years after that, he was back in the arena as a victim’s family member following the murder of his brother Michael. LaHood, now a father of three children, is plain when he says it: “I wish I wasn’t the most qualified—but I am.”

He claims Reed, who he says he does not know personally, is disconnected from her constituents. “The DA needs to get down off the ivory tower and get into the community,” he says in his rhythmic, serpentine delivery.

“As defense attorney, I paint with a fine brush, right? Because you get intimate with your clients and get to know them. And then you tell that story.” LaHood extends the metaphor to his goal as DA: to trade that fine brush for one broad enough to make policies and ensure those with fine brushes “have a fair canvas to paint on.”

A lot of mud was slung in the last DA race, much of it around LaHood’s drug arrest, which he later tried to have expunged from his record. After his 1994 run-in with the law, LaHood received a bit of cold comfort from his suspender-wearing father, County Court Judge Michael LaHood, that he says stuck. “[He said], ‘It will take you years ... years to build up a good reputation ... and one second to mess it up,’” LaHood recalls.

Though now firmly in LaHood’s past, the arrest of 20 years ago comes up over and over again in his political trajectory. While sometimes successful in recasting it as a character-building blip on an otherwise upstanding youth, LaHood just can’t seem to shake the rap.

His Democratic primary opponent illustrates both sides of the spin, according to LaHood. “[Huntzinger’s] told me many times that she’s very proud of me that I didn’t let a poor choice from 20 years ago define me. [She] told the audience that I was right for the DA’s job [in 2010].”

But time can also rip open all wounds.

Huntzinger rehashed his past at an editorial board meeting with the Express-News last month. “For her to use that as a positive for me in our friendship and then try to use it as a jab for political reasons was disappointing,” he says with a shake of his head ... and then, a shrug. –Jade Esteban Estrada