Boneheadz Brings on the Bros 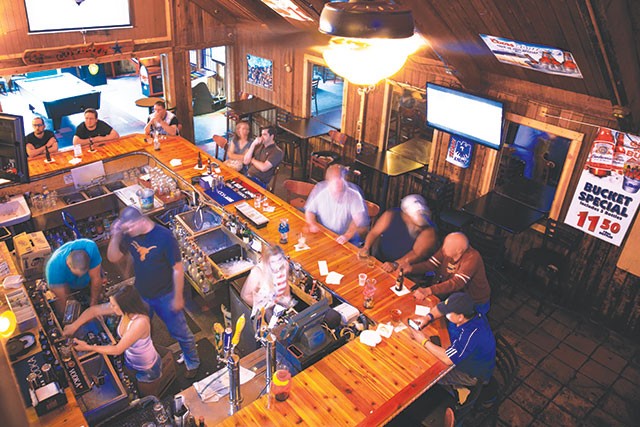 Bethany Rogers
We didn’t find very many ladies, other than the women behind the bar

Boneheadz Sports Bar (9503 Console), a place that could also be called Bro-Town USA, looks like a cross between a barn, a church and a frat house. An alcoholic’s Alamo if you will. And that is not necessarily a bad thing—as long as you know what you’re getting yourself into beforehand.

The “sports bar” aspect of this place seems like an afterthought. High ceilings and stained glass contrast with the random sports memorabilia and banners stapled on the walls next to the five TVs that surround the place. A nice, huge projection screen is no doubt the centerpiece come game day, but taking into account the lack of food here, Boneheadz does little to differentiate itself on this front.

Let’s just get this out of the way: There were lots of 20-something dudes and I might have spotted five females over the course of two nights. And the ones that were there were accompanied by their man/friend/significant other. It’s as if the most unpopular fraternity EVER had invaded the joint. If meeting women in bars is your thing (and it shouldn’t be), this really ain’t your place. Boneheadz is great for ladies nights, said no one ever.

Also contributing to the frat house feel—this time in a good way—were the separate rooms featuring different sorts of bar entertainment. You can shoot pool, play a videogame or test your might with a punch-bag boxing game. If getting drunk and letting loose on a boxing bag in a crowded room surrounded by your friends isn’t your idea of fun, you can at least enjoy yourself watching others “show off” on the bag. Trust me.

An upstairs loft area provides a nice escape from the blaring Southern rock and ’80s metal (of the Lynyrd Skynyrd and Poison variety, respectively). Four couches (that no doubt all have stories), a dartboard, an old-school projection TV and a mini bar make for a nice, out-of-the-way place to get your chill on. If Boneheadz has anything, it is options.

On the alcohol front though, things could use some tweaking. Your old friends Dos Equis, Miller Lite, Bud Light, Shiner and Fat Tire are all present, but good luck ordering a mixed drink. This is definitely more of a beer and shots bar, and I have a sneaking suspicion that Jäger is poured on the reg. Kudos to Boneheadz for their daily $2.50 beer specials (drafts on Sundays, Miller Lite on Wednesdays, etc…) but a lukewarm Blue Moon brought images of a keg jammed into a fridge with the door wide open. Gents, it’s time to graduate.