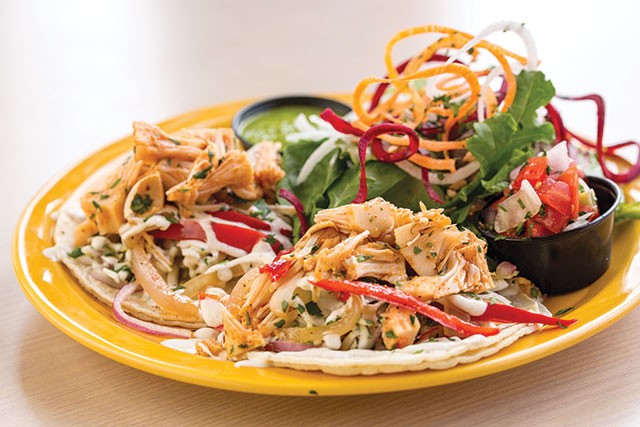 It’s not every day a vegan restaurant opens in San Antonio.After years as a catering company and food booth at the Quarry Farmers and Ranchers Market, in February Señor Veggie found a home in Southtown, inside the former Mr. Tim’s Country Kitchen.

That’s right, the lard is gone.

Owners Tiffany and Jose Cruz are dishing up loaded veggie takes on Tex-Mex favorites, while also drawing inspiration from other cuisines including Thai, Spanish and Mediterranean in appetizers (try the poblano corn fritters with addictive chipotle mayo), soups, salads, sandwiches and bowls.

The eats are moderately priced and definitely worth a second, third or fourth visit so you can navigate the entire 30-plus item menu, and almost half of the offerings are available without that pesky gluten.

If you’re in the mood for Americana, you’ll find the signature Señor Veggie burger a simple offering with housemade black bean patty (no pre-made business here), chipotle mayo and guacamole.

Food so good it won’t leave you wishing for its meaty counterpart.