An interview with the man behind the bear 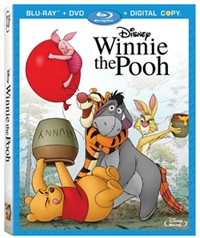 For Jim Cummings, providing the voices for animated characters like Winnie the Pooh and Tigger has been one of the many highlights of his 26-year career. Cummings began voicing Pooh in 1988. Tigger came two years later.

“The thing about Pooh and Tigger and all the Hundred-Acre Wood gang is that they’re so iconic,” Cummings told me during an exclusive interview for the DVD/Blu-ray release of Winnie the Pooh. “They’re sweet little characters who care about each other. It’s about loyalty, friendship, honor and love. Those kinds of things never go out of style.”

Other characters in Cummings’ extensive repertoire include Taz the Tasmanian Devil, Darkwing Duck, and Ed the Hyena from The Lion King.

During our interview, Cummings, 59, talked about how he feels when studios hire voice talent based on name recognition and what advice from Pooh he’s found useful in his own life.

What has been so special about Winnie the Pooh and Tigger in comparison to the other voice work you’ve done in your career?

They've been around forever and they've never been tied to any fad. There were no skateboards or hip-hop or fashion or Pogs involved. They are evergreen. There are no talking robots or flying wizards. They’re kind of in the same category as The Wizard of Oz. Everyone knows them and loves them and they’re safe, too. Parents can take their little 2-year-old or 22-year-old and know they won’t be seeing any Nazi surf zombies from Mars.

How did you feel about the new movie going back to the original 1960s style?

It was really nice. There have been some different styles of animation and different storylines over the years, but this one has a narrator and goes back to the characters running around on the page of a book and breaking the fourth wall. It’s everything we all fell in love with originally. The movie is just beautiful. You could put every frame of this movie in a picture frame. Let’s put it this way: Pooh Bear is a lot better than the Yogi Bear movie. Sorry about that Yogi.

Walt Disney executive and producer John Lasseter said he hoped the new film could “transcend generations.” Do you think it accomplished that?

Oh, I do, absolutely. It has some of the original music in it, but it’s also been updated with music by Zooey Deschanel. She did such a beautiful job. The songs are in the same style as the original. (Sings) “I’m just a little black rain cloud” or “Everything is honey

that’s alright with me.” It’s all those beautiful little melodies that if you find yourself thinking of them later on in the day, you don’t mind. Everything you liked about the original Pooh is back and better.

I’d hate to see this myself, but do you think Pooh could ever make a transition to 3D? I mean, they’re turning the Smurfs into 3D characters now, so why not Pooh?

Ugh, well, if they do, they’re going to be doing it without me. (Laughs) Winnie the Pooh wouldn’t call for 3D as much as other characters. I think turning Pooh into 3D would be gilding the lily, but if they do it I’ll watch

Of all the characters you’ve voiced in your career, is there a specific one you’ve felt a deeper connection with than the rest?

Well, I’m probably closer to Tigger than I am to Pooh in real life, that’s for sure. But I love those two. I feel like it’s an honor to perform them and bring them along to new generations. Ray (the Cajun firefly) from The Princess and the Frog was also very dear to my heart. I love New Orleans. It’s my adopted hometown. But I’ve loved others as well like Darkwing Duck and Taz the Tasmanian Devil. It’s tough to start picking because I feel like I’m picking between my kids. I love them all.

I’m interested in hearing your take on studios casting big stars for animated films like Johnny Depp in Rango and Jack Black in Kung Fu Panda.

I understand it. They’re not all like Robin Williams in Aladdin. Sometimes it works and sometimes it doesn’t. I think studios do it sometimes because they like to get the publicity of saying they have someone like Mel Gibson or Jennifer Lopez in their movie. (Laughs) I’ll tell Brad Pitt and Tom Cruise that if they promise not to make any animated movies, I won’t be a leading man in any of their movies.

What advice has Pooh or Tigger given that you’ve used in your own life?

Well, you just gotta keep on looking at the world though honey-colored glasses. (In Tigger’s voice) And the best advice I could give ya’ is to just don’t forget to remember to keep on bouncin’!