Year two on the picket line for Guenther workers

Union workers on strike at C.H. Guenther & Son Inc have become Southtown fixtures over the past year, perched outside the landmark flour mill waiving signs and banners at passing cars and pedestrians. But as workers with Teamsters Local 657 enter year two of their strike against Guenther, seeking higher wages to offset more costly medical coverage, neither side shows sign of budging. "At this point things are basically unchanged," said Steve Phillips, senior vice president for Guenther, maker and distributor of Pioneer Flour. "Neither the company nor the union have moved on their positions." It's been six months since talks with a federal mediator broke down, he said. Nearly 100 union workers at the mill walked out last April, frustrated when contract negotiations hit a a wall. Union member Tony Diaz said there are currently about 80 workers still on strike. Diaz and others gathered next to the mill Wednesday for a rally and luncheon, marking the second year of their fight against Guenther. With a number of local Democratic political candidates on hand to lend support, union leaders said the workers remain resolute.
click to enlarge 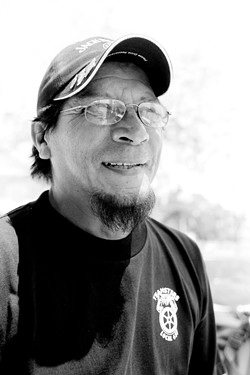 Guenther and workers entered into a three-year contract in 2010, but reopened talks last April to negotiate wages and benefits for the last two years of the deal. The company offered a 50-cents-an-hour wage increase spread out over two years, which would have eventually pushed wages to $14.96 an hour. However Guenther proposed pushing premiums for family medical coverage from about $11 a week to $35 a week – Phillips with Guenther says benefits were increased to comply with the federal Patient Protection and Affordable Care Act. “The company's position is that we made them a very fair offer,” he said. “I can tell you I've done negotiations since 1999, and it was by far the best contract offer we've made them since I've been with the company.” The company has since trained and hired replacement workers. Still, Diaz calls the wage increase “paltry, insulting,” particularly when coupled with the boost in premiums. The deal would have meant workers taking home $4 less a week in their pay checks. “That increase in our premium more than absorbed the wage increase. With deductibles and such, we all felt like we were just stuck in a quickly sinking boat.” Diaz admits the year-long strike has taken its toll on the workers. Many have scrambled to find odd jobs to stay afloat, even as they continue picketing outside the mill hours each week. One union member, who asked that his name not be used, pointed to a bandage on his arm, saying he's resorted to selling plasma to make ends meet. Sal Garay, a machine operator at the mill for nearly three decades, said a year without a steady paycheck from Guenther means he's unable to afford health insurance for his two daughters, though he's now getting some help from his son in the Air Force. “I think I deserve better for my family, considering what I've given that company,” Garay said. George Rivera, a former shipping and receiving worker at the mill who manned the picket line Wednesday, remarked, “I'm pretty much in the last steps of selling my house right now because of all this. But this is what we gotta do.”