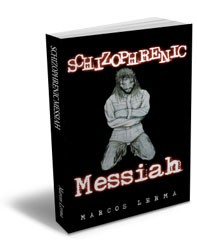 At the heart of the story is Jacob, who moves to Queens with his aunt after his mother and father are killed in Iraq. When Jacob’s aunt is then killed in a mysterious train wreck, he is adopted, growing up to be a relatively well-adjusted young man. That is, until the day he begins to see a dark, winged being following him, and is promptly institutionalized for schizophrenia. As Jacob’s messianic identity is revealed, we see him healing the sick and turning water into wine, which only serves to escalate the battle between Jacob and his doctor.

The text’s exposition does not always fully develop the complex world presented, which complicates character development. However, while rehashing historically recurring religious and political debates, the text uniquely confronts that age-old question: if Christ were alive today, who would he be and would we recognize him? By offering us a relatively normal, flawed human being who feels utterly lost in contemporary society, Lerma delivers an engaging read.