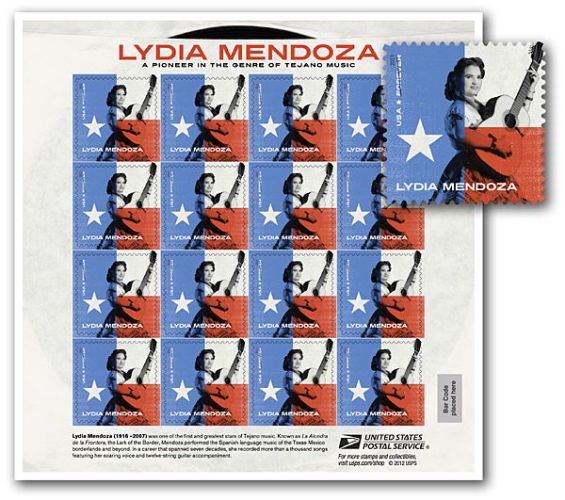 Few times has the Teatro Guadalupe been as packed as it was in the morning of May 15, when the United States Postal Service and the Guadalupe Cultural Arts Center headed by Patty Ortiz hosted the First-Day-Of-Issue Ceremony of the Lydia Mendoza Commemorative stamp launched by the USPS. The ceremony was emceed by actor Jesse Borrego and featured performances by the Sidney Lanier High School Band (National Anthem), speeches by Guadalupe Executive Director Patty Ortiz and Marie Therese Domínguez (the USPS' Vice President, Government Relations and Public Policy) and music by accordionist Eva Ybarra and singer Rita Vidaurri.

But Rita Vidaurri, "La Calandria," stole the show. After a heartfelt rendition of the classic ranchera "De qué manera te olvido" ("How Can I Forget You," composed by Federico Méndez Tejeda and immortalized by hundreds of stars from Vicente Fernández to Luis Miguel) she asked (in Spanish) if the audience "wanted to hear a joke." She told not one, but two R-rated ones, but don't fast-forward: listen to the song first.

Ok, here's the jokes: There was a little female chihuahua covered by fleas, and an old lady tells the owner: "Just rub gasoline on her, and the fleas will go away." The owner does just that, but the dog didn't like it and ran away. The owner, desperate, goes out looking for the dog. She asks a man whether he saw her. "Yes," he said, "but she smelled like gasoline." "That's the one!" the woman said. "Well," says the man, "I guess she run out of gasoline, because a dog was giving her a push."

It was an awkward moment that had nothing to do with Lydia Mendoza, but that didn't stop the full house of bursting in laughter. Rita was only warming up.

"You want to hear another one?" she asked, and the crowd begged for more. So Rita went on with a joke involving a married couple celebrating their anniversary under the park bench where they had met. The policeman that finds them tells the man: "I'll let you go, but she comes with me because this is the seventh time she's done that."

Of course, coming from the lips of Rita Vidaurri (and on the least expected occasion), the jokes were funny and brought the packed auditorium down. Take heed, Laugh Out Loud: Rita has the songs, but if she has more jokes like that, this could be a money maker.

Customers have 60 days (postmarked by July 15, 2013) to order the Lydia Mendoza commemorative stamp. Write to: