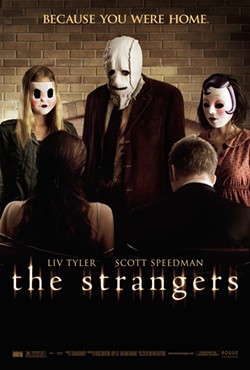 you never really know what happens in the end, or why, and the most terrifying part is that it seems realistic enough to happen to anyone you know." -Cassie Yardeni, Marketing Manager

"Gotta go with Texas Chainsaw Massacre! Any movie that gets banned from theaters for too much violence is definitely worth watching!" -Carlos Aguirre, Senior Account Executive

"My mother and I do a horror movie marathon ALL MONTH. :)

We always start it with HALLOWEEN!!! I mean come on, you gotta. Michael Meyers! AND THAT GENIUS MUSIC THEME! It's a true classic!" -Burgundy Woods, Account Executive 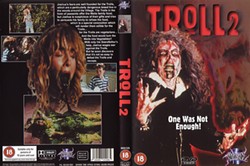 "Oh man, definitely Troll 2. It is so awful it might be the best movie I have ever seen. First, it's about goblins, not trolls, which is just great, and takes place in the town of Nilbog, which of course is goblin spelled backwards. Absolutely fabulous. Oh, and the little kid can talk to his ghost grandfather, who at some point becomes real and then back to a ghost. Do yourself a favor and check it out." -Justin Lopez, Distribution Manager

"My guilty pleasure horror movie is Re-animator. It steals the psycho theme for the opening credits and is a disgustingly awesome twist on a zombie movie!" -Johnny Deosdade, Senior Account Executive

"I'm sure this is cliche , but its The Excorcist. I could never finish watching it till i was an actual adult. And it still scared the hell out of me. No other movie has come close to that kind of scary." -Jaime Monzon, Digital Developer

"My favorite Halloween time movie is The Craft. I always aspired to be as powerful, cunning, and beautiful as those teenage witches. And have you seen their clothes? Great style.

"Two are pretty clear in my mind:

The Exorcism of Emily Rose: It didn't have much in the way of a score and really played up the suspense and Jennifer Carpenter's acrobatics still freak me out (see: dorm scene).

The Conjuring: Another flick rich in suspense. A creepy doll, a haunted house, a possession, what more can you ask for?" -Jessica Elizarraras, Food & Nightlife Editor 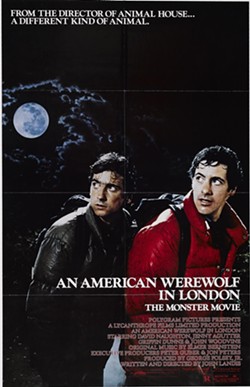 "James Signorelli's 1988 masterpiece Elvira: Mistress of the Dark. Beyond the obvious joys of seeing Elvira (co-writer Cassandra Peterson) relocate to a small Massachusetts town (where she gets into a catfight in a bowling alley, uses her cleavage to bust out of a cemetery and performs a Flashdance-inspired floor show for local high-schoolers), this guilty pleasure is full of useful one-liners like, "Well, here's to my big opening" and "Is this face taken?" -Bryan Rindfuss, Associate Editor

Tim Burton's imagination delivers a dark comedy that creatively deals with death, morality and familial relationships...and also reminds us there's just as much bureaucracy in the afterlife ;)

"There's some great ones on here! I also love Beetlejuice. However, the one horror movie I watch year after year is also the weirdest film I've ever seen. It's not only a violent, graphic film with a ridiculous body count, it's also a musical with a strong debt to The Sound of Music, and it has a 10-minute long claymation sequence at the beginning that has no apparent connection to the rest of the movie.

Obviously, it's Japanese. And I love it.

The Happiness of the Katakuris is a vile little film directed by Takashi Miike the same year he scored major notoriety for his insanely gratuitous Ichi the Killer (barf bags were handed out during screenings in Toronto and Stockholm). It concerns a multi-generational family that takes over a deserted mountain inn where all their guests die. Not wanting bad press, the family buries the bodies instead of reporting them. Cue the singing and dancing! Though there's some genuinely creepy scenes (Miike is a horror master, after all), most of the film is a mash-up of over-the-top violence and over-the-top musical numbers. As the trailer describes it "A series of disasters! And songs and dance solve them!" If you liked cult classic Japanese horror film House (Hausu), check this one out." -Callie Enlow, Editor in Chief

"Nightmare on Elm Street. Freddy stalks and kills you in your dreams and your dead FOR REAL. Everyone has to sleep eventually... One, two... Freddy's coming for you!!" -Sarah Estrada, Account Executive 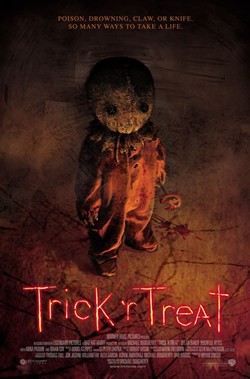 "Trick 'R Treat- Its the perfect Halloween movie. Makes you want to bust out your carving knives and hack up a pumpkin while eating an obscene amount of candy corn. The stories in this film are creepy, funny and perfectly gory. Also, ANNA PAQUIN!

Monster Squad- I always wanted to be in the Monster Squad as a kid. My little bro and I watched this film religiously. "Wolfman's got NARDS!" -Tina Corbeil, Graphic Designer

"If I'm feelin' fun, Hocus Pocus, hands down. It reminds me of my childhood back in Massachusetts and is just incredibly quotable. Also, Bette Midler's rendition of "I Put a Spell on You" is a classic.

So, there you have it! What's your favorite Halloween movie, San Antonio?