San Antonio is one 25 cities in the nation that experienced an increase in demand for emergency food assistance, according to a report released today. The 2013 U.S. Conference of Mayors Hunger and Homelessness Survey surveyed cities whose mayors sit on the conference task force– that includes Mayor Julián Castro. Officials were asked to address hunger, emergency food assistance and homelessness. 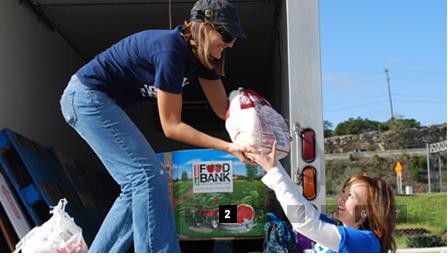 The picture in San Antonio is one in desperate need of additional resources– the percentage of emergency food assistance need unmet in SA (40 percent) in the past year  was roughly double the average of other cities surveyed (21 percent).

City leaders identified the impact of recent cuts to the Supplemental Nutrition Assistance Program (SNAP) or food stamps, as one of the "biggest challenge they will face in addressing hunger in the coming year." At the same time, nearly 60 percent of cities said increased SNAP benefits should be a key factor in reducing hunger. Food assistance programs would generally be unable to respond to increased demand caused by the cuts, they reported.

In SA, some 35 percent of food distribution comes from emergency federal aid. SA says they will need to substantially increase this source of food next year, while expecting a moderate decrease in resources in 2014. For a look at how SNAP cuts are affecting San Antonio and Texas, read the this week's Current news story "Food Stamp Cuts Threaten To Leave Many San Antonians Hungry."

Emergency kitchens and food pantries were forced to reduce the quantity of food people could receive at each food pantry visit or the amount of food offered per meal at emergency kitchens, the report finds. In 78 percent of the cities surveyed, food pantries had to decrease the number of times a person or family could visit a each month. In two-thirds of the cities, these food facilities were forced to turn people away because of limited resources.