Revelation, the new album by San Angelo’s Los Lonely Boys, will be officially released on Tuesday, January 21 via the band’s LonelyTone Records in collaboration with Austin’s Playing in Traffic, but fans will have a chance to buy the album a day early when the band appears at Barnes & Noble at La Cantera (15900 La Cantera Parkway, Bldg 27) at 8 p.m. Monday, January 20. The Garza brothers (Henry in guitar and vocals, Jojo in bass and vocals and Ringo on drums and vocals) will be signing autographs and giving away Revelation guitar picks for those who purchase the album.

The album, recorded in Austin, Nashville, Tn., Denver, Co., and Sherman Oaks, Ca., was produced and mixed by Don Gehman (except four tracks produced by Matthew Gerrard and mixed by Brian Allison) and features, in addition to the band’s usual mix of Texas power blues and three-part vocal harmonies, elements of reggae, baroque pop and a brand new team of co-songwriters that include George Pajon Jr. and Keith Harris (frequent Black Eyed Peas' collaborators) and Raúl Pacheco of Ozomatli.

It is the band’s first album since Henry fell off the stage in Los Angeles last February and suffered severe injuries.

“We nearly lost Henry, man, and that was a big change for us,” said Jojo in a press statement. “The whole experience was a wake-up call for us. It made us rethink every aspect of our lives and our careers, and it reminded us of what’s really important to us.”

Guests in the album include Carmelo Torres on percussion (the reggae “Give A Little More”), Kym Warner on mandolin (the polka-reggae “It’s Just My Heart Talkin,’” one of the best things the brothers ever recorded), Jeremiah Larralde on accordion (the conjunto-flavored first single, “Blame It On Love”), Fernando Castillo on flugelhorn (the folkish ballad “Everything About You,” sang by Jojo), Tom Peterson on tenor and baritone sax and Lee Thornberg on trumpet and trombone (the funky “So Sensual”), and Rashad Eggleston on cello (“The Greatest Ever,” a folk ballad). 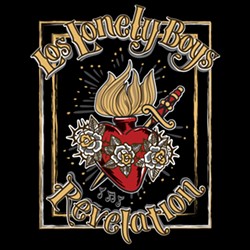