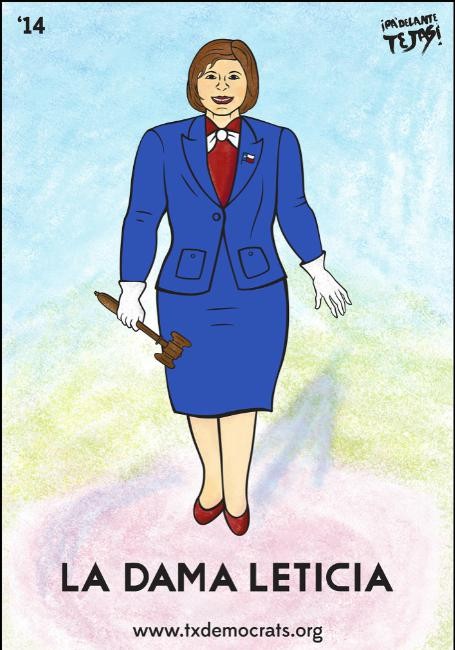 No, we’re not talking about their respective bids for higher office, rather, their (unofficial) appearance as cards in the Mexican lotería, a traditional Bingo-style game with iconic characters and objects. Created by the Texas Democratic Party’s Latino Initiative campaign ‘Pa’Delante Tejas,’ the card features a drawing of Van de Putte in a blue suit, white gloves and gavel in hand, “ready to take the dais on the floor of the Texas Senate,” according to the political group. Making its debut on Cinco de Mayo, the card is inspired by the original Mexican lotería card of ‘La Dama’ (The Lady). Van de Putte is currently running for lieutenant governor of Texas, and will face either state Sen. Dan Patrick (R-Houston) or incumbent Lt. Gov. David Dewhurst, depending on who comes out victorious in the upcoming May run-off election. The TDP created a similar special edition card in October for gubernatorial candidate Davis, dubbing her “La Valiente,” or The Brave One. In it, Davis wears the signature orange, adopted by pro-choice activists in the fight against state anti-abortion laws, and her famous pink sneakers, worn during the 11-hour filibuster she mounted this summer in an effort to defeat House Bill 2. “On this Cinco de Mayo, the Texas Democratic Party celebrates the rich culture and diversity that has made our state and party strong. As we look back at our history, we renew our commitment to a vibrant and increasingly diverse Texas [ ]," said Texas Democratic Party Chairman Gilberto Hinojosa in a statement. “Today, we are proud to launch Senator Leticia Van de Putte’s La Dama lotería card, and we look forward to the day when she takes the gavel as our next Lt. Governor.”