Confession: I've lived in San Antonio for just under 10 years. I moved here for school (Go Runners!) and somehow had not made it to the Institute of Texan Culture's Texas Folklife Festival. This changed on Saturday, June 7. Here's a quick recap for other Folklife virgins who should check out next year's event.

Don't act like you're not impressed. Sausage on a bun from the Belgian/German area.

Taquitos from the Mexican area.

A sample of haggis.

Should be noted that the Scottish Society of San Antonio doesn't use traditional ingredients as its not allowed to stuff sheep's heart, liver and lungs into the animals' stomach in the U.S.

Chicken and shish kebabs via the St. George Maronite Church.

Boozy margs via one of several cantinas.

The lineup also included Guinness and several other imported brews. 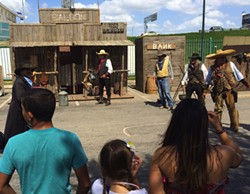 The Texas Clay Festival showcased their goods and techniques. 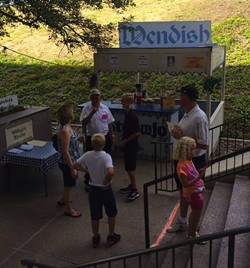 Finally found out what the Wendish group adds to the festival.

Didn't realize this was a thing either until Saturday.

Learned San Antonio has a breadmaking group. Unfortunately, they don't meet very often, but they did share recipes and tons of samples.

And really, the indoor stage was excellent in two ways–you'd catch an amazing performance (the Sikh Dharamsal show was especially energetic) or seven, but you can also cool off while exploring the inside of the Institute.

This year's slightly smaller festival (due to construction on Market), made for a pleasant event–no bumping into sweaty people or waiting in too long a line. My only takeaway? Should have worn sunscreen.