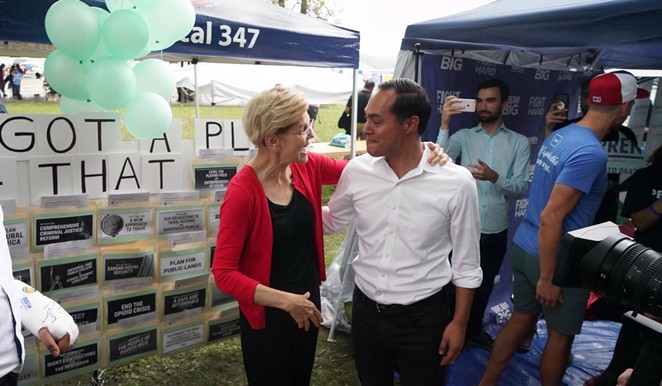 Twitter / ewarren
Less than a week after pulling the plug on his presidential campaign, San Antonio's Julián Castro has thrown his support behind Sen. Elizabeth Warren.

The endorsement comes at a good time for Warren, who's looking to reignite excitement in her campaign ahead of the Iowa caucuses. Castro — a former San Antonio mayor and U.S. Housing Secretary — announced last Thursday that he was ending his bid after weak polling kept him out of the past two Democratic debates.

"Theres one candidate I see who's unafraid to fight like hell to make sure America's promise will be there for everyone," Castro said in the video posted Monday via Twitter. "Who will make sure that no matter where you live in America or where your family came from in the world, you have a path to opportunity too. That's why I'm proud to endorse Elizabeth Warren for president."

Elizabeth and I share a vision of America where everyone counts. An America where people⁠—not the wealthy or well-connected⁠—are put first. I'm proud to join her in the fight for big, structural change. pic.twitter.com/xDvMEKqpF3


News that Castro's endorsement would go to Warren isn't much of a surprise.

Both have staked out positions in the party's left wing during the campaign. What's more, media outlets also have noted the friendship the two exhibited during the often-rough primary season.

Following his endorsement, Castro will travel to New York to campaign alongside Warren at a joint rally.